LA JOLLA, CA—Scientists at Scripps Research have identified a protein in sensory nerves that works as a key detector of itch—specifically the “mechanical” itch stimulus of crawling insects, wool fibers, or other irritating objects that touch the skin. 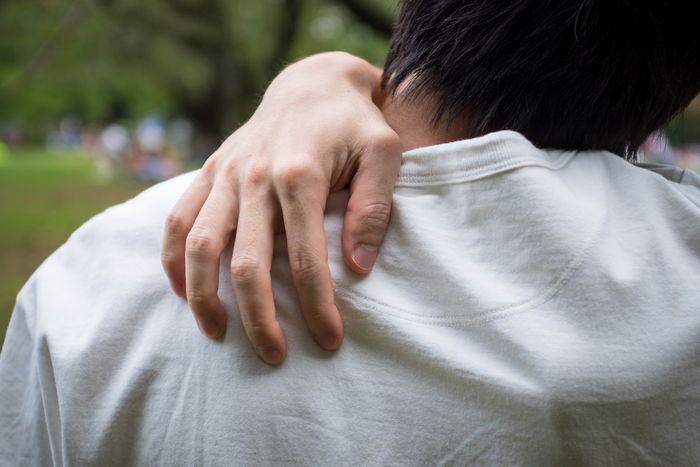 LA JOLLA, CA—Scientists at Scripps Research have identified a protein in sensory nerves that works as a key detector of itch—specifically the “mechanical” itch stimulus of crawling insects, wool fibers, or other irritating objects that touch the skin.

The discovery, published June 22, 2022, in Nature, is the first identification of a sensor for mechanical itch rather than chemically-triggered itch. It could lead to better treatments for itch conditions such as eczema and psoriasis.

“These findings help us untangle the complexity of itch sensation, and suggest that PIEZO1 inhibitors could be very useful clinically,” says study senior author Ardem Patapoutian, PhD, a professor in the Department of Neuroscience at Scripps Research, and a Howard Hughes Medical Institute investigator.

Itch is a distinct sensation with its own nerve circuitry and evolutionary purpose—likely to alert organisms to potentially harmful chemicals, insects and parasites. Researchers over the past decade or so have identified itch-specific subsets of spinal neurons that extend nerve fibers into the skin and are sensitive to chemical triggers of itch such as the allergy mediator histamine. But so far, relatively little has been discovered about the circuitry of mechanical itch.

PIEZO1’s role in mechanical itch was unexpected. Patapoutian won a share of last year’s Nobel Prize for Medicine or Physiology for his lab’s pioneering research on PIEZO1 and its sister-protein PIEZO2. These unique, propeller-shaped “mechanosensor” ion channels are embedded in the outer membranes of many cell types. They become activated when mechanically distorted, opening their ion channels and triggering various downstream events. Since 2010, Patapoutian and colleagues have shown that PIEZO2 is a key mechanosensor for light touch, the feeling of the positioning of the body and limbs, and the urge to urinate—all via nerves in various tissues and organs. By contrast, the researchers have found that PIEZO1 has a variety of non-sensory roles throughout the body, for example in blood vessels and red blood cells.

While their initial studies suggested that PIEZO1 was not expressed in sensory neurons, other recent investigations have suggested that it is expressed at low levels in some subsets of these neurons. In the new study, Patapoutian and his team, including study first author Rose Hill, PhD, a postdoctoral research associate, followed up on this surprising lead.

In experiments in mice, they confirmed that PIEZO1 is expressed, and appears to be a functional, mechanical pressure-sensitive ion channel protein in two different types of sensory neuron that were already implicated in chemical itch. Mice with an overactive form of PIEZO1 were markedly more sensitive to itch sensations. By contrast, mice lacking PIEZO1 in their sensory neurons scratched themselves far less when stimulated on the skin with filaments that normally would trigger strong itch sensations. The researchers also showed that a PIEZO1-blocking compound alleviates scratching behaviors in mice with the equivalent of eczema.

“We did see a dramatic effect on itch with this compound, and though it wasn’t specific enough against PIEZO1 to develop into a drug, we hope eventually to develop a much more PIEZO1-specific compound for treating itch conditions,” Hill says.

Curiously, the absence or enhancement of PIEZO1 activity in mice caused at least a small reduction or increase of scratching due to chemical itch triggers such as histamine—implying that mechanical and chemical itch signals are indeed transmitted in some cases by the same sensory neurons.

The researchers are now investigating whether variants of the PIEZO1 gene in the human population are related to itch sensitivity. The Patapoutian lab published a paper in 2018 showing that a mildly overactive form of PIEZO1, which also has the effect of making red blood cells relatively resistant to malaria parasites, is present in about a third of people of African ancestry.

Funding was provided by the Howard Hughes Medical Institute, the National Institutes of Health (R35 NS105067), and the Helen Hay Whitney Foundation.