Scientists have come a long way since Antonie van Leeuwenhoek discovered teeming colonies of previously invisible bacteria and protozoa while peering through his custom-made microscopes. The architecture of cells, organelles, proteins, and even molecules has since been illuminated across the tree of life. Yet despite these advances, barriers still remain to comprehensively mapping the microscopic world. Before they can be viewed under a microscope, tissues and cell components must first be stained with dyes and fixatives and subjected to a lengthy preparation process. 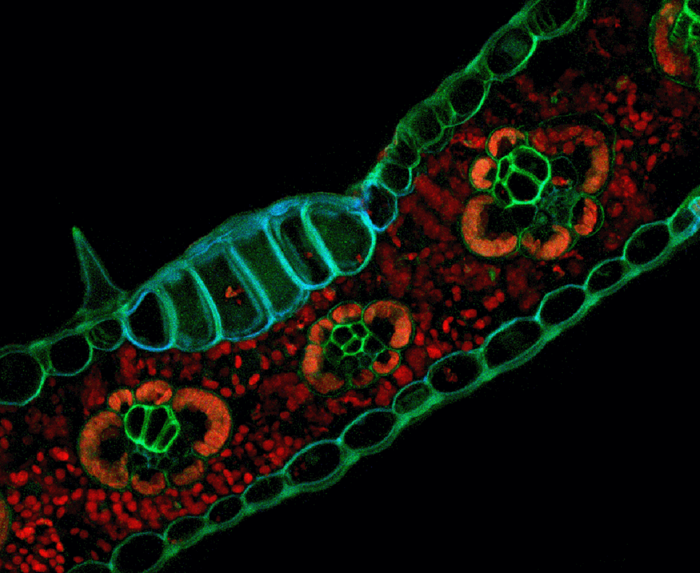 Scientists have come a long way since Antonie van Leeuwenhoek discovered teeming colonies of previously invisible bacteria and protozoa while peering through his custom-made microscopes. The architecture of cells, organelles, proteins, and even molecules has since been illuminated across the tree of life. Yet despite these advances, barriers still remain to comprehensively mapping the microscopic world. Before they can be viewed under a microscope, tissues and cell components must first be stained with dyes and fixatives and subjected to a lengthy preparation process.

In a new study published in the journal Applications in Plant Sciences, scientists obviate the need for specimen staining by tapping into the natural autofluorescence of tissues in species across the plant tree of life.

“Our work provides a cost-effective, generalized protocol for plant sample preparation and visualization that is equally applicable to large research institutions and smaller plant science groups,” said Dr. Timothy Pegg, a visiting assistant professor at Marietta College and lead author on the study.

When certain tissue types in both plants and animals absorb light, electrons in their atoms get a jolt of energy that bumps them into an excited state. In plant leaves, these electrons become so unstable that they break free from their atoms and are used by the plant to power photosynthesis. In other tissues, the excess energy is re-emitted in the form of low-frequency light bright enough to be detected with specialized microscopes.

Autofluorescence hasn’t always been viewed as a good thing. In cases where researchers have to use stains to visualize specific structures, the light-emitting properties of nearby tissues can interfere by decreasing the contrast between different cell types.

But it can also be an indispensable resource for discovery. Autofluorescence has been used to detect early onset cancers, as well as other diseases and pathologies. It’s been used to study how insects use their tongues and antennae to taste food, the mechanisms underlying tail regeneration in lizards, and to analyze the diversity of microscopic plankton in marine environments.

Autofluorescence is equally useful in plants, where it shows up in everything from the hard tissues that give woody plants their stability, to the water-wicking residue covering spores and pollen, to the diverse arsenal of toxic compounds plants produce to ward off would-be predators.

Up until now, however, researchers have lacked a one-size-fits-all protocol for detecting autofluorescent light in plants. The lack of a unified, standard approach is understandable, given there are nearly half-a-million living species of land plants and algae, but Pegg and his colleagues remained undeterred. They selected 12 species from several key plant groups separated by more than 500 million years of evolutionary history, including pines, bryophytes, flowering plants, and algae.

Using these representatives, they developed a cost-efficient method of tissue preservation without the need for stains or dyes.

While autofluorescence can often be directly visualized with confocal microscopes, it can also be induced or enhanced with different fixatives, including alcohols, ethanol, and compounds called aldehydes. Pegg and his colleagues chose five of the most effective among these to test their plant specimens. After marinating in fixative for 24 hours, the plants were rinsed, chopped to the width of a human hair, and mounted on a transparent slide for visualization.

When the researchers looked through the microscope, the miniature world of plant cells and organelles was brought into sharp focus. The rigid lines of cell walls stood out in bas-relief from the tightly packed chlorophyll inside. By honing in on particular wavelengths of light emitted by proteins, they could distinguish between the dense features of nuclei and the water- and sugar-conducting tissue snaking their way between cells.

Most fixatives performed well in the representative plants, with striking results, but algae proved to be an exception. Most land plants have thick, buttressing cell walls that help prevent water loss while providing structural support, qualities that algae lack. Due to their flimsier cellular scaffolding, ethanol and alcohol fixatives quickly penetrated the cell walls of algae and the sole liverwort (a plant closely related to mosses) used in the study, causing the organelles to wrinkle and deform. For these specimens, Pegg recommends sticking to aldehyde fixatives or reducing the amount of time used in the specimen preparation stages.

Most research labs also don’t own the high-powered confocal microscopes required to view cellular structures at fine scales, instead paying hourly rates to use the equipment provided by their institution, an issue which Pegg and his colleagues hope their protocol can address.

“Our simple sample preparation technique can cut down on the amount of time researchers need to spend visualizing samples on advanced microscopes,” said Dr. Robert Baker, assistant professor of biology at Miami University and senior author on the study.

All of the chemicals and reagents used in the study are similarly inexpensive and readily available, meaning that just about anyone at a research institution can use this protocol to study subcellular interactions in plants.

Applications in Plant Sciences (APPS) is a monthly, peer-reviewed, open access journal focusing on new tools, technologies, and protocols in all areas of the plant sciences. It is published by the Botanical Society of America (www.botany.org), a nonprofit membership society with a mission to promote botany, the field of basic science dealing with the study and inquiry into the form, function, development, diversity, reproduction, evolution, and uses of plants and their interactions within the biosphere. APPS is available as part of the Wiley Online Library (https://onlinelibrary.wiley.com/journal/21680450).

Algae to angiosperms: Autofluorescence for rapid visualization of plant anatomy among diverse taxa