Scientists use NASA data to predict appearance of December 14, 2020 eclipse 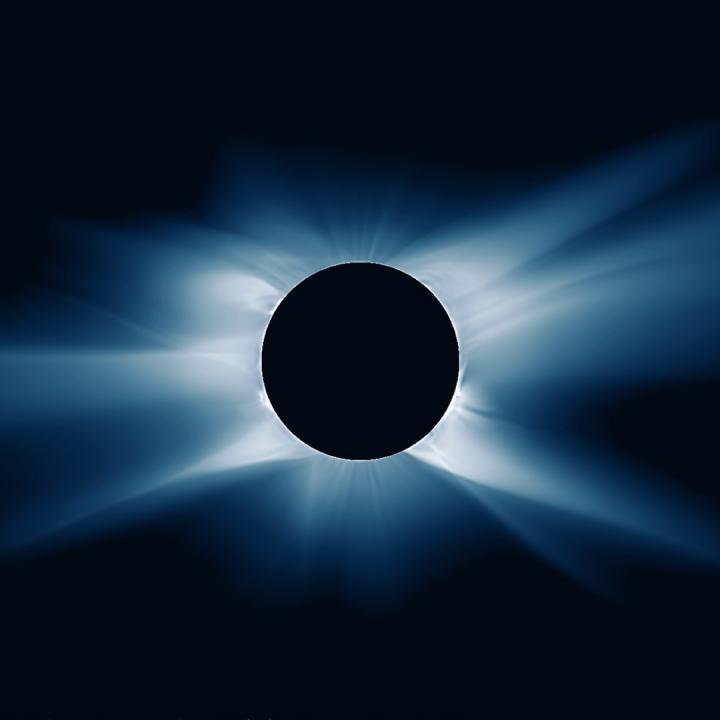 On Dec. 14, 2020, the Moon’s shadow raced across Chile and Argentina, casting a thin ribbon of land into brief, mid-day darkness.

Those in the path of this total solar eclipse glimpsed the solar system in motion. During a solar eclipse, the Moon crosses between the Sun and Earth, covering the bright face of the Sun. Weather permitting, a total eclipse reveals the Sun’s otherwise hidden, pearl-white halo of an atmosphere, called the corona.

One week before, a group of scientists predicted how the corona would look during this particular eclipse. The corona shifts in response to the Sun’s evolving magnetic field. Superhot gases — known as the solar wind — gust from the corona and breeze through the solar system. This flow shapes the conditions in space known as space weather. Modeling the corona is a key part of understanding and eventually predicting space weather, which affects astronauts, satellites, and everyday technology, like radio and GPS.

Predicting when and where a total solar eclipse will happen is easy. But predicting the appearance of the corona is much harder, since the Sun’s magnetic field is so vast and complicated. By comparing corona predictions to eclipse photographs from the ground, the researchers can test their models and identify where they could be improved.

Predictive Science Inc. — a private research company based in San Diego, California, and supported by NASA, the National Science Foundation, and the Air Force Office of Scientific Research — used data from NASA’s Solar Dynamics Observatory, or SDO, to develop their prediction. The NASA Advanced Supercomputing (NAS) Division at the agency’s Ames Research Center in Silicon Valley, California, supported the computations, in addition to the National Science Foundation.

The Sun is constantly boiling. Energy and magnetic fields churn through the star. Knowing where they go is key to predicting the Sun’s behavior, but it’s a tough question — like asking where a grain of rice will rise and fall in a bubbling pot. For now, the researchers’ model relies on SDO’s magnetic maps of the Sun’s surface to capture how the magnetic field shapes the corona over time.

Currently, the Sun is growing more active, which makes the task trickier. When the Sun is active, the corona’s appearance can shift in just days. The Sun’s activity rises and falls over the course of its natural roughly 11-year cycle. The Sun passed solar minimum in Dec. 2019, marking the transition into a new solar cycle.

When the Dec. 14 eclipse came, the corona was hazier and calmer than predicted. The prediction showed defined structures, which, while roughly located in the right place, were more defined than what appeared in reality.

“With the Sun’s activity picking up, it was interesting to see how much changed by eclipse day,” Predictive Science researcher Cooper Downs said.

Data sampling could partly explain the differences. The team’s data included a strong hotspot of magnetic activity. Two weeks before the eclipse, a solar flare and anemone-like eruption blasted from this spot. Later, the region weakened, enough for that part of the corona to slacken by the day of the eclipse. But the team’s data didn’t include the decay that followed, so the resulting prediction had a stronger magnetic field and a more defined corona on that side.

A bubble from a solar eruption, called a coronal mass ejection, is also visible in the bottom left of the corona — another sign of the Sun’s rising activity. The eruption appears to have burst from the Sun a few hours before the eclipse.

Observations from Solar Orbiter could help improve these models. Currently, researchers are limited to measurements from Earth’s perspective in the ecliptic plane — the belt of space, roughly aligned with the Sun’s equator, that all the planets orbit through. When Solar Orbiter, which launched in February 2020, obtains measurements of the magnetic field in other places, and eventually, at the Sun’s north and south poles, researchers will have a more comprehensive view of our star.

The research group has produced a prediction for each eclipse in recent years, making tweaks and improvements each time. In 2017, they also used NASA data and the Pleiades supercomputer at Ames to predict the appearance of the corona during the Aug. 21, 2017 eclipse across the United States. SDO observations of filaments — snake-like structures on the Sun’s surface — helped refine the model. For a 2019 eclipse, the researchers improved their modeling of the Sun’s magnetic field at the poles, which strongly influences the shape of the corona during solar minimum.

One change they made this year is a more precise model of the temperatures in the corona. Instead of making the electrically charged solar material in their simulation all a single uniform temperature, they allow for separate temperatures for different kinds of particles. After the eclipse, the group will compare their model to the reality and continue to adjust the simulation.

“We put ourselves out there to move the model forward,” Downs said. Discrepancies between the prediction and the real thing demonstrate how important eclipses are to modelers, he said. “If it doesn’t agree well, that just tells you how much further we have to go.”