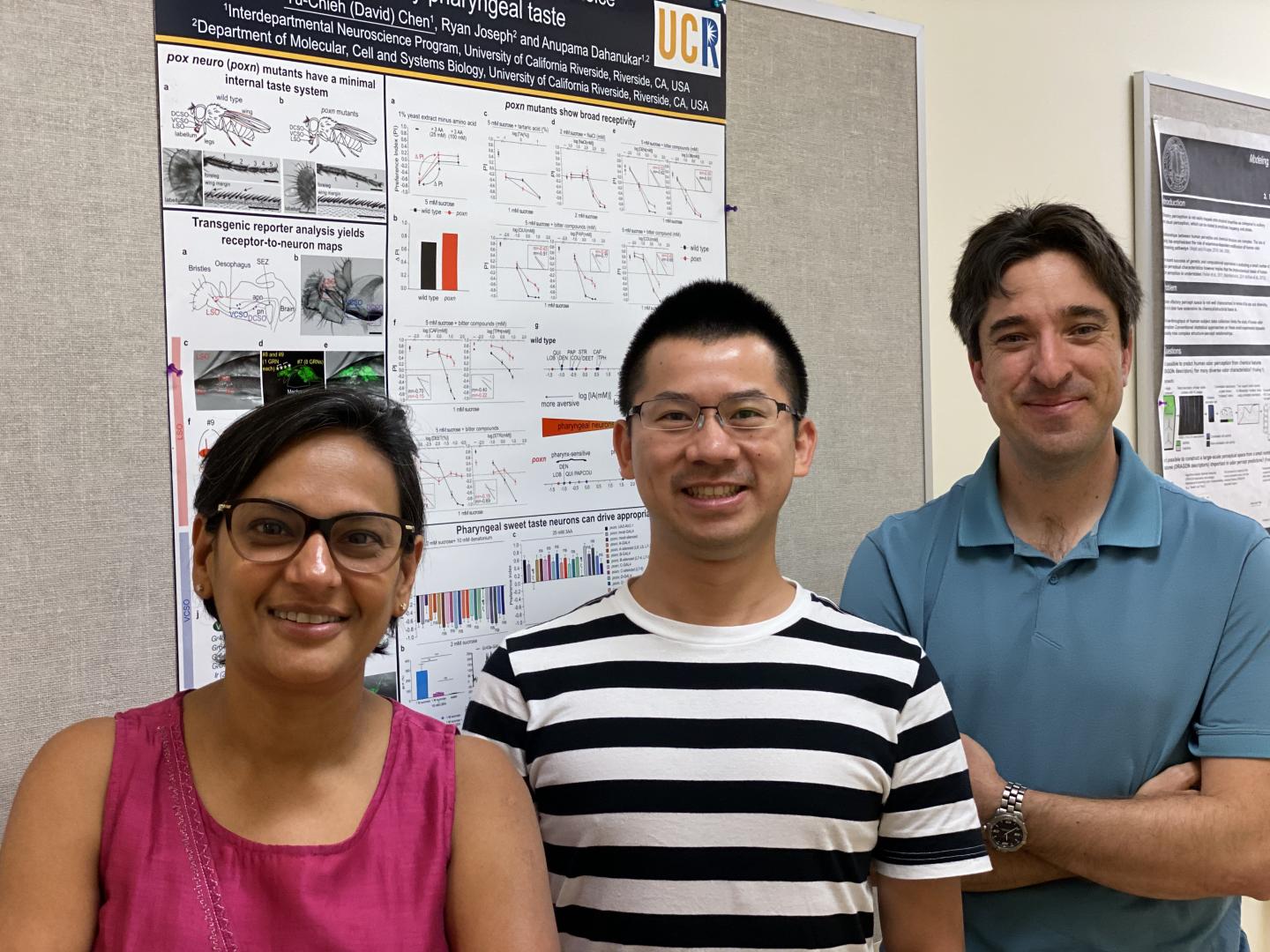 RIVERSIDE, Calif. — Using the common fruit fly as a model, a research team led by scientists at the University of California, Riverside, studied how taste neurons control feeding behaviors and found that flies genetically modified to have only these neurons can avoid many aversive chemicals, such as bitter compounds, acids, and high concentrations of salt.

“This work extends our understanding of the function of internal taste neurons present in organs in the pharynx toward ensuring that unpalatable foods are not consumed,” said Anupama Dahanukar, an associate professor in the Department of Molecular, Cell, and Systems Biology at UC Riverside, who led the research team. “An understanding of how feeding behavior is controlled in insects may provide insights into developing strategies for controlling insect pests and disease vectors.”

“Because of their internal location, pharyngeal organs have not been the focus of many insect studies,” Dahanukar said. “But precisely because of their location, they are likely to be critical for controlling food intake.”

Study results appear in Cell Reports; the research paper is featured on the cover of the Oct. 22 issue of the journal.

“What’s interesting about our findings is that pharyngeal taste neurons have broad functionality for avoiding ingestion of different categories of chemicals, avoidance can be achieved by more than one type of neuron, and activation of just a single pharyngeal neuron can suppress food intake,” Dahanukar said.

To understand which subsets of pharyngeal neurons are responsible for detecting bitter, acid, and high salt tastes, the research team went a step further to find the responsible neuronal population for each category of aversive chemicals. The researchers used a genetic toolkit to manipulate select classes of pharyngeal taste neurons in the fruit fly and examine the consequences of these manipulations.

“We found that rejection of different categories of aversive compounds is dependent on distinct combinations of pharyngeal taste neurons,” said Yu-Chieh David Chen, a former graduate student in Dahanukar’s lab and the first author of the research paper.

To understand where these pharyngeal neurons convey taste information in the fly brain, Chen used a newly developed circuit-tracing technique, called trans-Tango, to map the downstream neuronal circuits connecting each subset of pharyngeal neurons. Taste sensory neurons constitute the primary neurons. Neurons that connect to these sensory neurons are the second-order neurons; they process taste information in the brain.

Chen stressed that fundamental knowledge about how the brain is wired is crucial for understanding how sensory inputs are translated into behavioral outputs.

“We expect our study will lead to a greater understanding of how taste information is coded in the brain and lay the foundation for systemwide analyses of relationships between sensory input and behavioral output,” he said.

Dahanukar added that feeding is a critical behavior in all animals, essential for survival, and tightly regulated to control both the quality and quantity of ingested substances.

“Now that we have some understanding of their organization and function in a genetic model insect, we can apply it to studying pharyngeal organs and how they control feeding in insects that are more relevant from a health or economic perspective, such as mosquitoes and crop-damaging pests. After all, an insect’s feeding behavior is pertinent to how much damage it causes,” she said.

Dahanukar and Chen were joined in the study by Ryan Matthew Joseph of UC Riverside; and Scarlet Jinhong Park and William W. Ja of the Scripps Research Institute in Florida. Chen graduated with a doctoral degree from UC Riverside earlier this year.

The study was funded by grants from the National Institutes of Health and funds from the UC Agricultural Experiment Station Mission Funding Program.

The University of California, Riverside is a doctoral research university, a living laboratory for groundbreaking exploration of issues critical to Inland Southern California, the state and communities around the world. Reflecting California’s diverse culture, UCR’s enrollment is more than 24,000 students. The campus opened a medical school in 2013 and has reached the heart of the Coachella Valley by way of the UCR Palm Desert Center. The campus has an annual statewide economic impact of almost $2 billion. To learn more, email [email protected]

Leaving home is beneficial for male squirrels but not for females,…