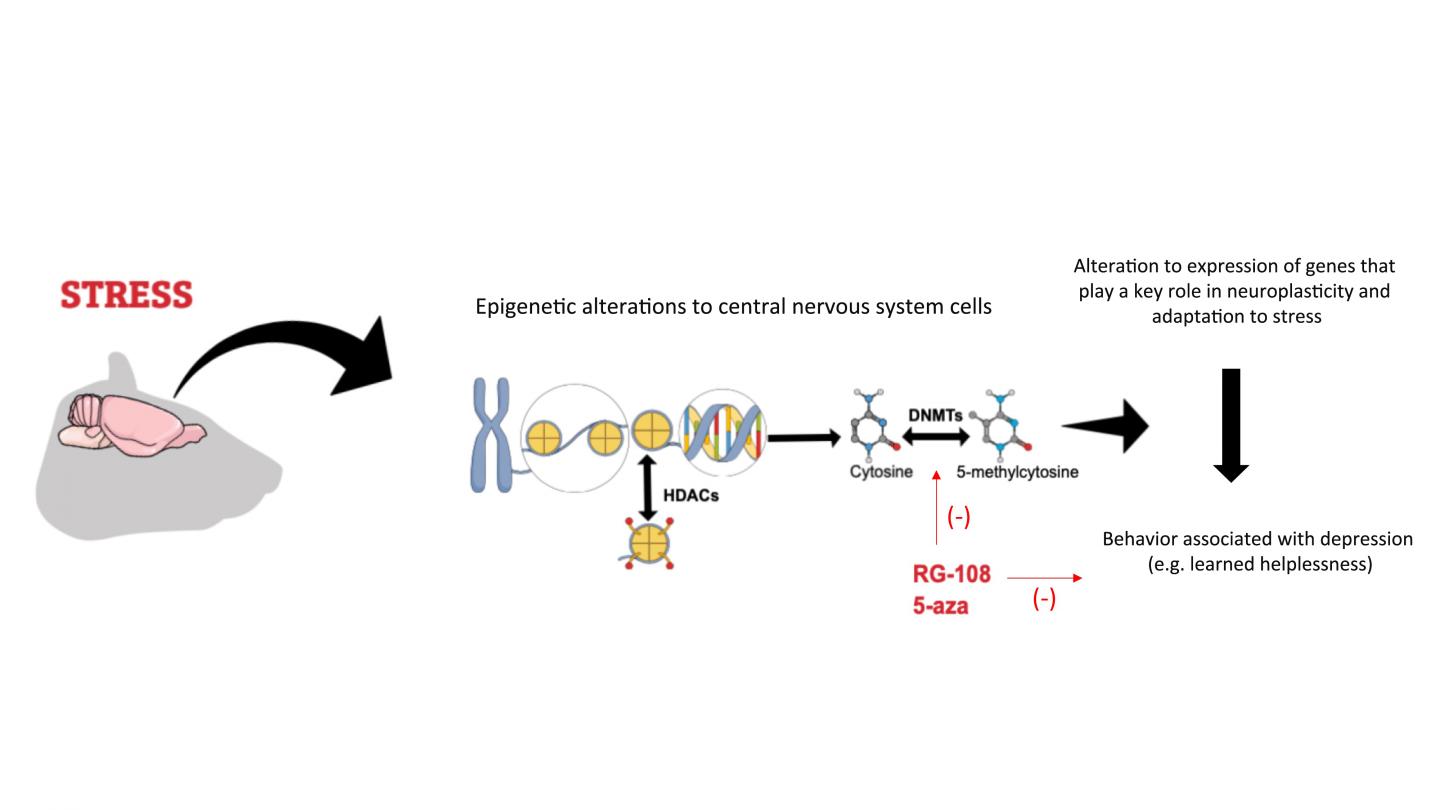 By Karina Ninni | Agência FAPESP – Treatment of depression faces two main challenges. The first is that almost 50% of patients do not respond well to existing antidepressants. The second is that conventional medications take a relatively long time – around three to five weeks – to have the desired effect. A group of researchers affiliated with the University of São Paulo (USP) in Brazil set out to tackle the second problem by using epigenetic modulators to try to “erase” the consequences of stress. Epigenetic mechanisms are part of a complex system that controls how and when genes are switched on or off.

Exposure to stress, a key trigger of depression, alters certain epigenetic markers in the brain. Many of these alterations occur in genes associated with neuroplasticity, the brain’s ability to change in response to experience. Stress increases DNA methylation in these genes.

DNA methylation is a chromatin remodeling process that regulates gene expression by recruiting proteins involved in gene repression or by inhibiting the binding of transcription factors to DNA. Most existing antidepressants are designed to reduce this process.

The team led by Sâmia Joca, a professor at USP and the University of Aarhus in Denmark, decided to conduct an in-depth investigation into the action of BDNF (brain-derived neurotrophic factor), a nervous system protein with well-documented effects on the regulation of neuronal plasticity.

“Stress reduces expression of BDNF and, as shown in the literature, antidepressants have no effect if BDNF signaling is blocked. That’s why we focused on BDNF,” said Joca, who is affiliated with the Biomolecular Science Department at USP’s Ribeirão Preto School of Pharmaceutical Sciences (FCFRP).

The group tested the hypothesis that stress increases methylation of the gene for BDNF, reducing its expression and that this reduction is linked to depressive behavior. “Our starting point was this: if we administered a genetic modulator that inhibited DNA methylation, the process wouldn’t happen, BDNF levels would be normal, and there would be an antidepressant effect,” Joca said. “If the antidepressant effect is indeed linked to normalization of the methylation profile, so that conventional drugs take time to work because it takes time to eliminate stress-induced alterations, we imagined that direct modulation of these epigenetic mechanisms would produce the effect rapidly. We found this was indeed the case.”

They report the results in an article published in the journal Molecular Neurobiology. The first author is Amanda Juliana Sales, who was supported by FAPESP. The other authors are Izaque S. Maciel and Angélica Suavinha, researchers supervised by last author Joca and also supported by FAPESP.

“We tested two drugs, one of which is used to treat cancer (gliomas). The other is completely experimental,” Joca said. “It’s important to note that these drugs can’t be used to treat depression because if they reduce DNA methylation unrestrictedly they’ll increase the expression of several genes rather than just the gene that interests us. So there will be adverse effects. The findings point not to prospects for novel antidepressants but to an interesting angle from which to develop novel treatments.”

According to Joca, to test the hypothesis that direct modulation of epigenetic mechanisms would work faster, it was necessary to use (and validate) a model that distinguished very clearly between chronic and acute treatment. The scientists first validated a stress-induced depression model in rats treated with well-known conventional drugs. In this model, called “learned helplessness”, the rats were exposed to inescapable stress, followed seven days later by a situation in which it was possible to avoid stress by moving to the other side of the chamber they were in.

The results showed a higher number of failures to learn this avoidance behavior among stressed than non-stressed animals, which was expected. This trend was attenuated by chronic treatment with conventional antidepressants and acute treatment with epigenetic modulators.

“What we call learned helplessness in this model is similar to depression in humans, to the feeling that there’s nothing the person can do to make the situation better,” Joca said. “The model was validated and showed that when continuously treated with antidepressants, the animals returned to normal and resembled non-stressed animals in behavioral terms. However, this only happened if they were treated repeatedly. The same applies to depressed people, who have to take the drug continuously. There is no acute effect from a single dose.”

The forced swimming test was also used to stress the rats, whose behavior was observed after 24 hours. In this case, too, conventional drugs reduced the level of stress-induced depression. Having validated the model, the researchers ran another series of experiments in which epigenetic modulators were found to have an antidepressant-like effect.

The team tested two different drugs as modulators, 5-AzaD and RG108. Both inhibit the enzyme responsible for DNA methylation, “but they aren’t chemically related,” Joca explained. “We wanted to avoid the possibility that the effect was due to some non-specific mechanism in one of the drugs. So we used entirely different drugs and obtained the same result. We measured the effect at two different times, shortly after the inescapable stress in one group and before the helplessness test in the other. We observed a rapid antidepressant effect in both cases.”

The next step was a molecular analysis of 5-AzaD in order to produce a methylation profile of the gene of interest. “We found that stress did indeed increase methylation of BDNF as well as TrkB, another nervous system protein, and this was moderately attenuated by our treatments,” Joca said.

Because the alteration was very subtle, the researchers decided to analyze retest reliability. “Using a different model, we reproduced results of the forced swimming test and injected the drug systemically while also administering a BDNF signaling inhibitor to the cortex. This had no antidepressant effect,” Joca said.

Sales has continued her postdoctoral research with a fellowship from FAPESP, and is currently working under Francisco Silveira Guimarães, a professor at USP’s Ribeirão Preto Medical School (FMRP).