Barcelona, 14 September 2021,- Some types of chemotherapy eliminate cancer cells by damaging their DNA. These drugs can also affect healthy cells, where the damage can generate mutations that persist after the end of the treatment. 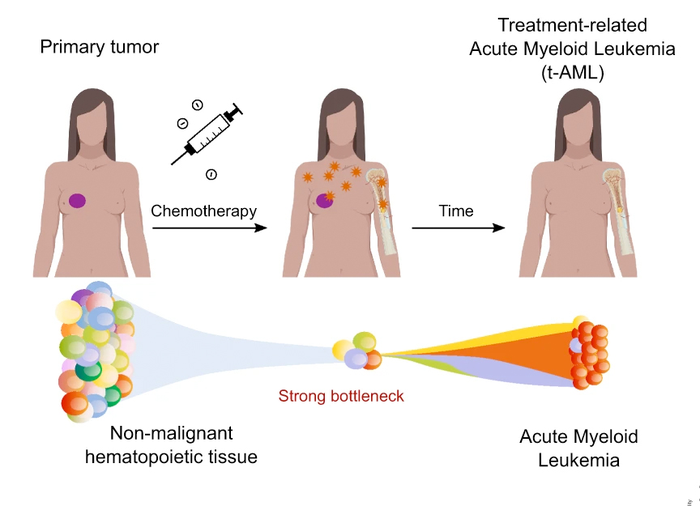 Barcelona, 14 September 2021,- Some types of chemotherapy eliminate cancer cells by damaging their DNA. These drugs can also affect healthy cells, where the damage can generate mutations that persist after the end of the treatment.

Researchers at the IRB Barcelona’s Biomedical Genomics Laboratory, led by ICREA researcher Dr. Núria López-Bigas, have identified the “footprints” (in the form of DNA mutations) left by platinum-based chemotherapies in cases of acute myeloid leukaemia (AML) associated with previous chemotherapeutic treatment of a solid tumour.

“In this work, we were particularly interested in identifying the mutations caused by chemotherapy in healthy cells, to understand whether the onset of AML is before or after the exposure of patients to chemotherapies,” says Dr. Abel González-Pérez, a research associate who has co-led the project with Dr. López-Bigas. “In the case of platinum-based chemotherapies, the detection of this mutational fingerprint in all AML cells allows us to affirm that the development of treatment-associated AML is subsequent to exposure to these drugs,” he explains.

Specifically, the researchers were able to identify the “footprints” of platinum-based chemotherapies (cisplatin, oxaliplatin, and carboplatin) in the blood cells of patients with secondary AML. In contrast, despite also being related to cases of secondary AML, therapies based on 5-Fluorouracil or Capecitabine were not found to leave detectable footprints in healthy blood cells, probably because they have a different mechanism of action.

“Our study allows us to distinguish whether clonal hematopoiesis had already begun before treatment with chemotherapy and thus establish a temporal relationship,” says Dr. Oriol Pich, first author of the study and Alumni of IRB Barcelona, and currently a postdoctoral researcher at the Francis Crick Institute in London.

The map of genetic alterations caused by chemotherapy

In 2019, the Biomedical Genomics Laboratory published a paper identifying the “footprints” left in healthy cells by six therapies commonly used to treat cancer. In this regard, they observed that some of these chemotherapies altered DNA between one hundred and a thousand times faster than the processes associated with ageing.

This research has been possible thanks to the patients and their families who gave consent for their samples to be used for scientific research. This work has been carried out in collaboration with the Hospital de Sant Pau in Barcelona and has been funded by the European Research Council (ERC), the Ministry of Science, Innovation and Universities, and the Department of Enterprise and Knowledge (Government of Catalonia).

The evolution of hematopoietic cells under cancer therapy