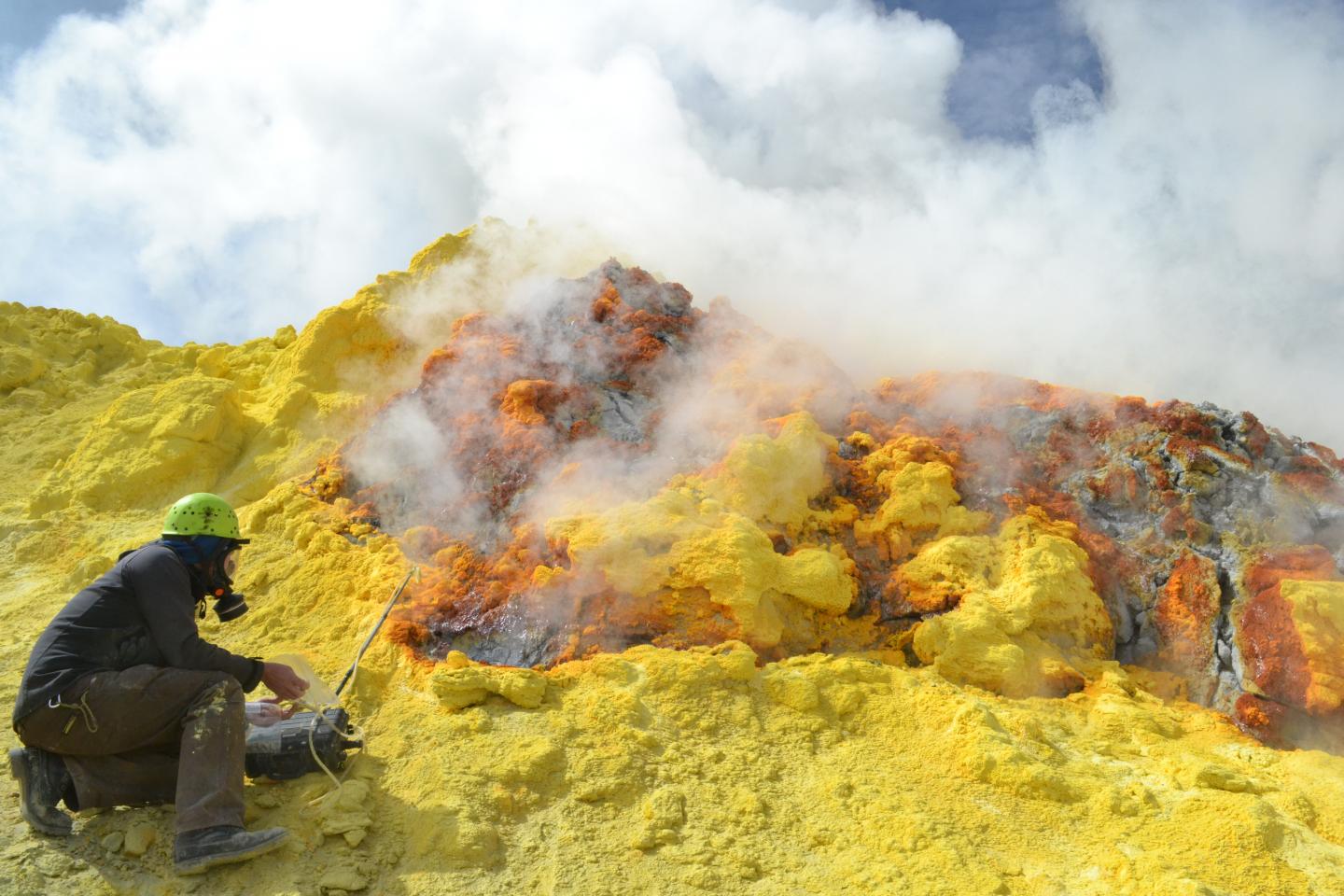 Preparing to summarize and celebrate the 10-year Deep Carbon Observatory program at the National Academy of Sciences, Washington DC, Oct. 24-26, DCO’s 500-member Reservoirs and Fluxes team today outlined several key findings that span time from the present to billions of years past; from Earth’s core to its atmosphere, and in size from single volcanoes to the five continents.

Among many wide-ranging findings, outlined and summarized in a series of papers published in the journal Elements:

Says DCO scientist Marie Edmonds of the University of Cambridge, UK: “Carbon, the basis of all life and the energy source vital to humanity, moves through this planet from its mantle to the atmosphere. To secure a sustainable future, it is of utmost importance that we understand Earth’s entire carbon cycle.”

“Key to unraveling the planet’s natural carbon cycle is quantifying how much carbon there is and where, how much moves — the flux — and how quickly, from Deep Earth reservoirs to the surface and back again.”

Adds colleague Tobias Fischer of the University of New Mexico, USA: “The Deep Carbon Observatory has advanced understanding of the inner workings of Earth. Its collective body of more than 1500 publications has not only increased what is known but established limits to what is knowable, and perhaps unknowable.”

“While we celebrate progress, we underline that deep Earth remains a highly unpredictable scientific frontier; we have truly only started to dent current boundaries of our knowledge.”

How Much Carbon does Earth Contain?

Scientists have long known that carbon inside Earth exists as a diverse array of solids, fluids, and gases. Some of these materials involve combinations of carbon with oxygen (e.g. carbon dioxide), with iron (e.g., carbides), with hydrogen (e.g., kerogen, coal, petroleum, and methane), and other elements (e.g., silicon, sulfur, and nitrogen), in addition to elemental carbon (e.g., graphite and diamond).

Deep Carbon Observatory scientists underline that knowledge of total carbon in lower mantle and core is still speculative and the numbers are sure to evolve in accuracy as research continues. That said, experts (notably Lee et al., 2019) estimate reservoirs of carbon on Earth as follows:

By the numbers: Best current estimates, carbon on Earth

Release of CO2 from volcanoes

Earth’s total annual out-gassing of CO2 via volcanoes and through other geological processes such as the heating of limestone in mountain belts is newly estimated by DCO experts at roughly 300 to 400 million metric tonnes (0.3 to 0.4 Gt).

Volcanoes and volcanic regions alone outgas an estimated 280-360 million tonnes (0.28 to 0.36 Gt) of CO2 per year. This includes the CO2 contribution from active volcanic vents, from the diffuse, widespread release of CO2 through soils, faults, and fractures in volcanic regions, volcanic lakes, and from the mid-ocean ridge system.

In many world regions, tectonic outgassing (emissions from mountain belts and other plate boundaries), particularly in cool night temperatures, can cause dangerous levels of CO2 close to the ground — enough to suffocate livestock.

According to DCO researchers, with rare exceptions over millions of years the quantity of carbon released from Earth’s mantle has been in relative balance with the quantity returned through the downward subduction of tectonic plates and other processes.

While the volume of carbon buried through subduction and what’s released from volcanoes and tectonic fractures are normally in steady state, about four times over the past 500 million years this balance has been upended by the emergence of large volcanic events — 1 million or more square kilometers (the area of Canada) of magma released within a timeframe of a few tens of thousands of years up to 1 million years.

These “large igneous provinces” degassed enormous volumes of carbon (estimated at up to 30,000 Gt — equal to about 70% of the estimated 43,500 Gt of carbon above surface today).

Carbon cycle imbalance can cause rapid global warming, changes to the silicate weathering rate, changes to the hydrologic cycle, and overall rapid habitat changes that can cause mass extinction as the Earth rebalances itself.

Similar carbon catastrophes have been caused by asteroids / meteors (bolides), such as the massive Chixculub impact in the Yucatan area of Central America 65 million years ago — an event to which extinction of the dinosaurs and most other plants and animals of the time has been attributed.

According to Australian researchers Balz Kamber and Joseph Petrus: “The Chicxulub event … greatly disrupted the budget of climate-active gases in the atmosphere, leading to short-term abrupt cooling and medium-term strong warming.”

“Thus, some large bolide impacts are comparable to those observed in the Anthropocene in terms of rapidly disrupting the C (carbon) cycle and potentially exceeding a critical size of perturbation.”

DCO experts estimate that about 400 of the 1500 volcanoes active since the last Ice Age 11,700 years ago are venting CO2 today. Another 670 could be producing diffuse emissions, with 102 already documented. Of these, 22 ancient volcanoes that have not erupted since Pleistocene epoch (2.5 million years ago to the Ice Age) are outgassing. Thus all volcanoes, the young and very old, may be emitting CO2.

Today’s CO2, sulphur dioxide and hydrogen sulphide emissions rates are now quantified for many of the world’s most active volcanoes thanks in part to the development of miniature, durable, inexpensive instruments.

And several volcanoes have been wired up with permanent gas instrument monitoring stations to obtain real time data readings, improving monitoring by governments and universities in the USA, Italy, Costa Rica, and elsewhere. About 30 collaboratively operated gas-monitoring stations on volcanoes across five continents now exist, which continually monitor emissions.

Pioneered by scientists with DCO’s DECADE (Deep Earth Carbon DEgassing) subgroup, the technologies and installations have helped revolutionize data collection within inaccessible or dangerous volcanic places. The data obtained are combined with readings from long-established ground and satellite systems.

Recent research has revealed the number of volcanoes thought to be out-gassing measurable amounts of CO2 today. Estimated at 150 in 2013, DECADE researchers confirm that more than 200 volcanic systems emitted measurable volumes of CO2 between the years 2005 and 2017. Of these, several super-regions of diffuse degassing have been documented (e.g., Yellowstone, USA, the East African Rift, Africa, and the Technong volcanic province in China, to name a few). Diffuse degassing is now recognized as a CO2 source comparable to active volcanic vents.

Among the DCO’s legacies: a new database (http://www.magadb.net) to capture information on CO2 fluxes from volcanic and non-volcanic sources around the world.

Volcanic whispers: Changes in ratio of vented SO2 to CO2 can forewarn of eruptions

Research at a growing number of well-monitored volcanoes worldwide has provided important new insight about the timing of eruptions relative to the composition of volcanic outgassing.

Year-round monitoring at five volcanoes revealed that the level of carbon dioxide relative to sulfur dioxide in volcanic gases systematically changes in the hours to months before an eruption. Volcanoes where such patterns have been documented include Poas (Costa Rica), Etna and Stromboli (Italy), Villarica (Chile), and Masaya (Nicaragua). (See also http://bit.ly/2Ssk2UN).

Likewise the CO2 to SO2 ratio changed dramatically months to years prior to large eruptions at Kilauea (Hawaii) and Redoubt Volcano (Alaska), in the USA, suggesting that monitoring gas composition, often in invisible plumes, offers a new eruption forecasting tool that, in some cases, precedes increases in volcano seismicity or ground deformation.

“Carbon, the sixth element, plays unique roles in our dynamic and evolving planet. It provides the chemical foundation for life, it serves as the primary source of our energy needs, it inspires a host of remarkable new materials, and it plays a disproportionate role in Earth’s uncertain, changeable climate and environment. These multi-faceted aspects of carbon have inspired decades of intensive research, most of which has focused on the near-surface carbon cycle–the oceans, atmosphere, and biosphere that display rapid changes and that are most influenced by human activities. Deep carbon research takes a longer-term, global view by considering the estimated 90 percent of Earth’s carbon that is hidden from view in the planet’s interior. We explore the forms, quantities, movements, and origins of carbon sequestered in Earth’s inaccessible core, cycling in the deep mantle, reacting in deep fluids, and lurking in a fascinating subsurface biosphere. We cannot understand carbon in Earth–we cannot place the changeable surface world in context–without the necessary baseline provided by deep carbon research.”

“For billions of years, Earth seems to have found a balance between carbon subducted deep into the interior and carbon emitted from volcanoes – processes that help to stabilize climate and environment. But how stable is that incessant cycling? No natural law requires that the amount of carbon going down … must exactly equal the carbon returned to the surface by volcanoes and other less violent means. No question is more central to the Deep Carbon Observatory than this balance between what goes down and what comes back up.”

“Earth is unique among the planets in our solar system in that it has liquid water at its surface, fosters life, and has active plate tectonics. Identifying all linkages between these phenomena serve as important steps in humanities enduring quest to understand the origins of Earth-like habitability. One absolute certainly, however, is that carbon plays a governing role. For example, Earth’s clement environment is related to atmospheric chemistry, which is warm enough to stabilize liquid water at its surface but cold enough to permit plate tectonics, and it is an incontrovertible fact that the carbon content of our atmosphere and oceans are directly linked with Earth’s climate”

” Important DCO outputs are steady-state models with powerful new data to evaluate the contemporary fluxes between carbon reservoirs in the deep Earth and their effects on everything from the evolution of life to the air we breathe. Armed with this understanding, we can better evaluate perturbations to, or non-linearities in, the Earth system through deep time.”

“We have achieved a much more complete picture of volcanic carbon dioxide degassing on Earth, reinforcing the importance of active volcanoes, but discovering that the subtle release over large hydrothermal provinces and areas of continental rifting are also dominant regions of planetary outgassing.”

Dedicated to developing a fundamental understanding of environments and processes that regulate the volume and rates of production of abiogenic hydrocarbons and other organic species in the crust and mantle through geological time.

Dedicated to improving our understanding of the physical and chemical behavior of carbon at extreme conditions, as found in the deep interiors of Earth and other planets.

Dedicated to assessing the nature and extent of the deep microbial and viral biosphere.

The new CO2 flux data from volcanoes showed that dormant volcanoes as well as active volcanoes emit large fluxes of previously “unseen” CO2, derived from the degassing of magma bodies in the crust below. These diffuse CO2 fluxes make a large contribution to the total volcanic outgassing carbon flux.