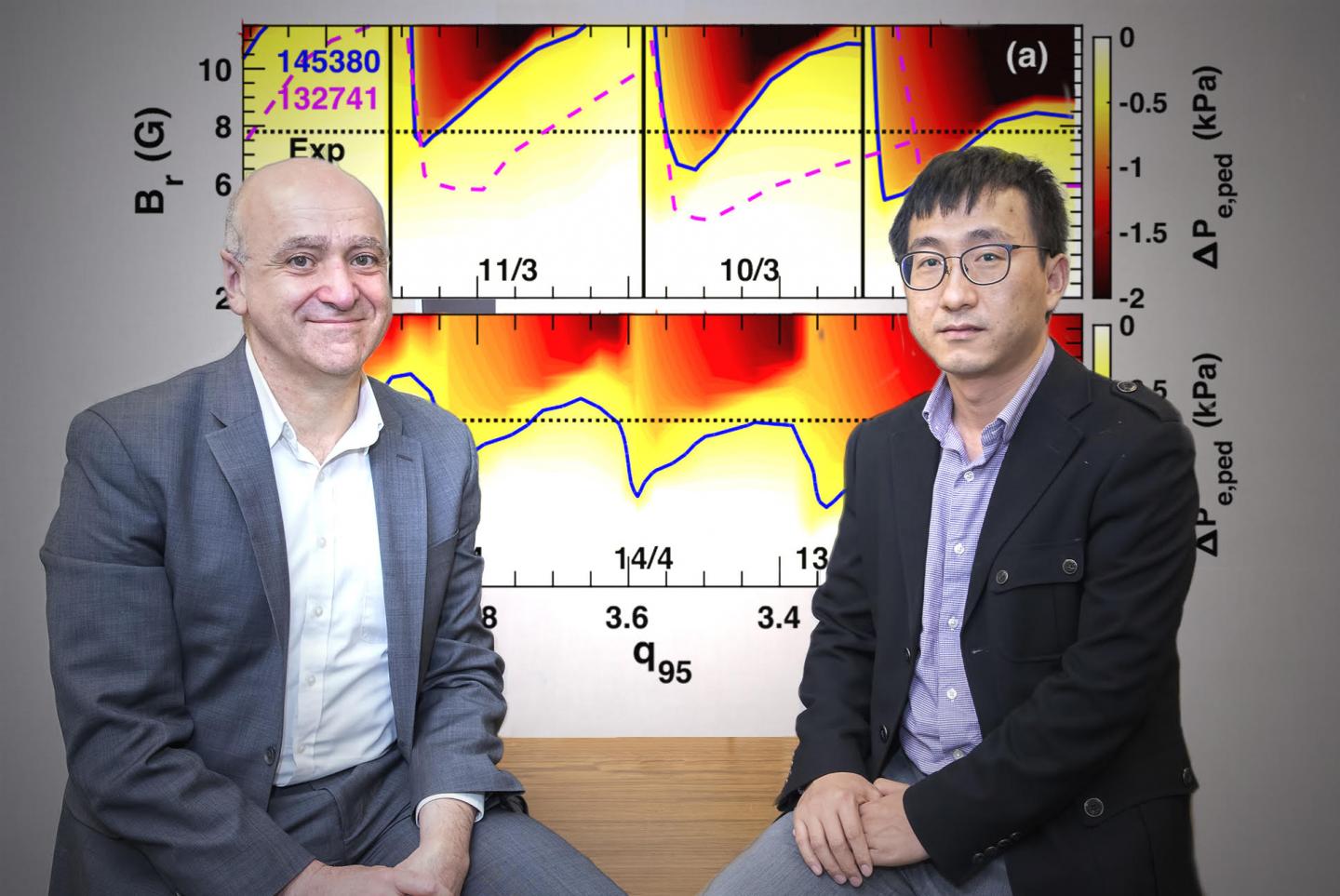 Picture an airplane that can only climb to one or two altitudes after taking off. That limitation would be similar to the plight facing scientists who seek to avoid instabilities that restrict the path to clean, safe and abundant fusion energy in doughnut-shaped tokamak facilities. Researchers at the U.S. Department of Energy’s (DOE) Princeton Plasma Physics Laboratory (PPPL) and General Atomics (GA) have now published a breakthrough explanation of this tokamak restriction and how it may be overcome.

Toroidal, or doughnut-shaped, tokamaks are prone to intense bursts of heat and particles, called edge localized modes (ELMs). These ELMs can damage the reactor walls and must be controlled to develop reliable fusion power. Fortunately, scientists have learned to tame these ELMs by applying spiraling rippled magnetic fields to the surface of the plasma that fuels fusion reactions. However, the taming of ELMs requires very specific conditions that limit the operational flexibility of tokamak reactors.

Now, researchers at PPPL and GA have developed a model that, for the first time, accurately reproduces the conditions for ELM suppression in the DIII-D National Fusion Facility that GA operates for DOE. The model predicts the conditions under which ELM suppression should extend over a wider range of operating conditions in the tokamak than previously thought possible. The work presents important predictions for how to optimize the effectiveness of ELM suppression in ITER, the massive international fusion device under construction in the south of France to demonstrate the feasibility of fusion power.

Fusion, the power that drives the sun and stars, combines light elements in the form of plasma — the hot, charged state of matter composed of free electrons and atomic nuclei that makes up 99 percent of the visible universe — to generate massive amounts of energy. Tokamaks are the most widely used devices by scientists seeking to replicate fusion as a renewable, carbon-free source of virtually limitless energy for generating electricity.

PPPL physicists Qiming Hu and Raffi Nazikian are the lead authors of a paper describing the model in Physical Review Letters. They note that under normal conditions the rippled magnetic field can only suppress ELMs for very precise values of the plasma current that produces the magnetic fields that confine the plasma. This creates a problem because tokamak reactors must operate over a wide range of plasma current to explore and optimize the conditions required to generate fusion power.

The authors show how, by modifying the structure of the helical magnetic ripples applied to the plasma, ELMs should be eliminated over a wider range of plasma current with improved generation of fusion power. Hu said he believes the findings could provide ITER with the wide operational flexibility it will need to demonstrate the practicality of fusion energy. “This model could have significant implications for suppressing ELMs in ITER,” he said.

Indeed, “What we have done is to accurately predict when we can achieve ELM suppression over wider ranges of the plasma current,” said Nazikian, who oversees PPPL research on tokamaks. “By trying to understand some strange results we saw on DIII-D, we figured out the key physics that controls the range of ELM suppression that can be achieved using these helically rippled magnetic fields. We then went back and figured out a method that could produce wider operational windows of ELM suppression more routinely in DIII-D and ITER.”

The findings open the door to enhanced tokamak operation. “This work describes a path to expand the operational space for controlling edge instability in tokamaks by modifying the structure of the ripples,” said Carlos Paz-Soldan, a GA scientist and a co-author of the paper. “We look forward to testing these predictions with our upgraded field coils that are planned for DIII-D in a few years’ time.”

Returning to the aircraft analogy, “If you could fly at only one or two different altitudes, travel would be very limited,” said PPPL physicist Brian Grierson, a co-author of the paper. “Fixing the restriction would enable the plane to fly over a wide range of altitudes in order to optimize its flight path and fulfill its mission.” In the same way, the present paper lays out an approach that is predicted to expand the capabilities of fusion reactors to operate free from ELMs that can damage the facilities and hinder the development of tokamaks for fusion energy.

Support for this research comes from the DOE Office of Science. Collaborators include researchers at the University of California, San Diego, and the Max Planck Institute for Plasma Physics. Part of the data analysis was performed using the OMFIT integrated modeling framework developed by GA scientists.

About the DIII-D National Fusion Facility. DIII-D is the largest magnetic fusion research facility in the U.S. and has been the site of numerous pioneering contributions to the development of fusion energy science. DIII-D continues the drive toward practical fusion energy with critical research conducted in collaboration with more than 600 scientists representing over 100 institutions worldwide. For more information, visit https://www.ga.com/magnetic-fusion/diii-d