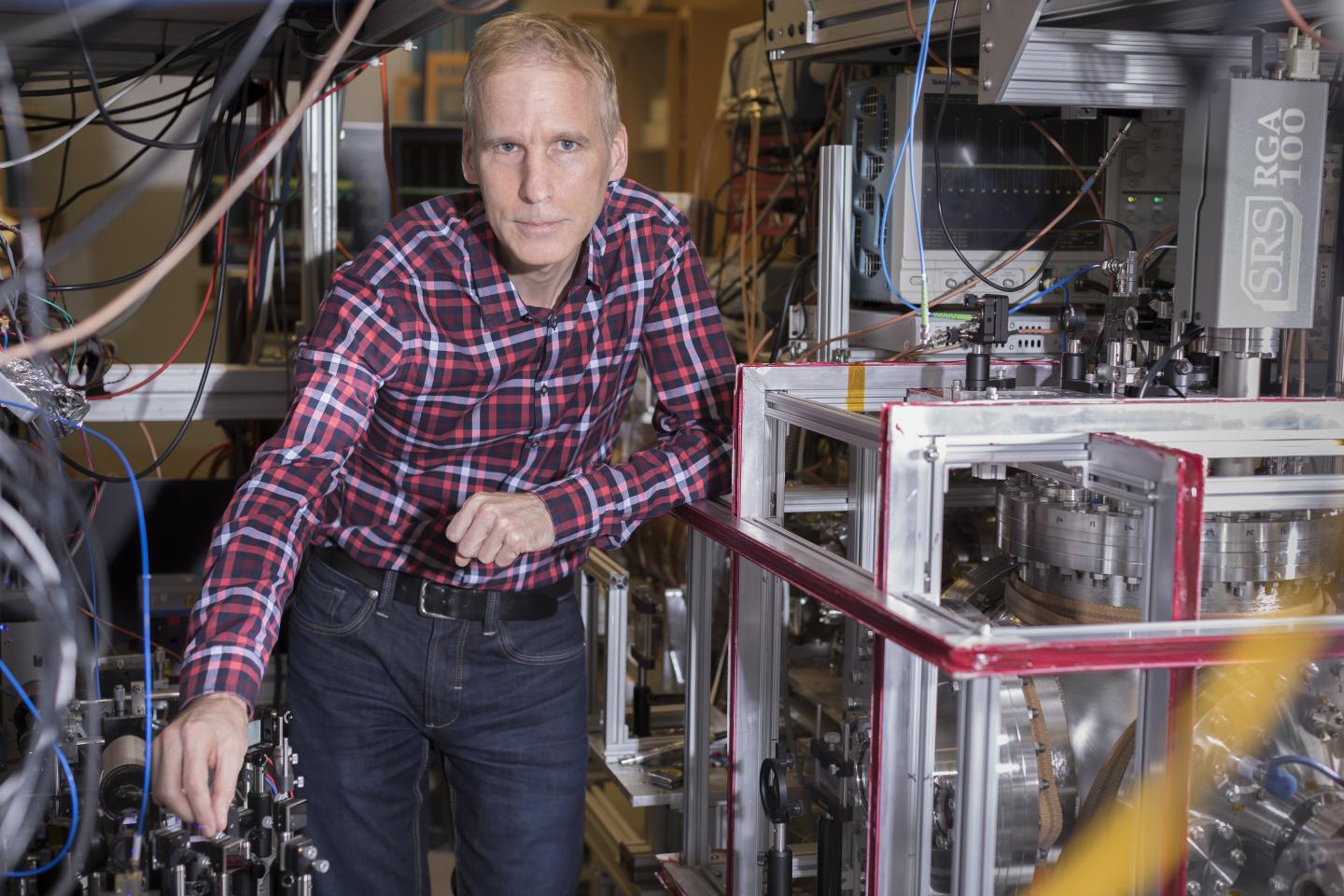 TORONTO, September 5, 2019 – York University researchers have made a precise measurement of the size of the proton – a crucial step towards solving a mystery that has preoccupied scientists around the world for the past decade.

Now, a study to be published in the journal Science finds a new measurement for the size of the proton at 0.833 femtometres, which is just under one trillionth of a millimetre. This measurement is approximately five percent smaller than the previously-accepted radius value from before 2010.

The study, led by researchers in York University’s Faculty of Science, presents a new electron-based measurement of how far the proton’s positive charge extends, and it confirms the 2010 finding that the proton is smaller than previously believed.

“The level of precision required to determine the proton size made this the most difficult measurement our laboratory has ever attempted,” said Distinguished Research Professor Eric Hessels, Department of Physics & Astronomy, who led the study.

“After eight years of working on this experiment, we are pleased to record such a high-precision measurement that helps to solve the elusive proton-radius puzzle,” said Hessels.

The quest to resolve the proton-radius puzzle has far-reaching consequences for the understanding of the laws of physics, such as the theory of quantum electrodynamics, which describes how light and matter interact.

Hessels, who is an internationally-recognized physicist and expert in atomic physics, says three previous studies were pivotal in attempting to resolve the discrepancy between electron-based and muon-based determinations of the proton size.

The 2010 study was the first to use muonic hydrogen to determine the proton size, compared to prior experiments that used regular hydrogen. At the time, scientists studied an exotic atom in which the electron is replaced by a muon, the electron’s heavier cousin. While a 2017 study using hydrogen agreed with the 2010 muon-based determination of the proton charge radius, a 2018 experiment, also using hydrogen, supported the pre-2010 value.

Hessels and his team of scientists spent eight years focused on resolving the proton-radius puzzle and understanding why the proton radius took on a different value when measured with muons, rather than electrons.

The York University team studied atomic hydrogen to understand the deviant value obtained from muonic hydrogen. They conducted a high-precision measurement using the frequency-offset separated oscillatory fields (FOSOF) technique, which they developed for this measurement. This technique is a modification of the separated oscillatory fields technique that has been around for almost 70 years and won Norman F. Ramsey a Nobel Prize. Their measurement used a fast beam of hydrogen atoms created by passing protons through a molecular hydrogen gas target. The method allowed them to make an electron-based measurement of the proton radius that is directly analogous to the muon-based measurement from the 2010 study. Their result agrees with the smaller value found in the 2010 study.

York University champions new ways of thinking that drive teaching and research excellence. Our students receive the education they need to create big ideas that make an impact on the world. Meaningful and sometimes unexpected careers result from cross-disciplinary programming, innovative course design and diverse experiential learning opportunities. York students and graduates push limits, achieve goals and find solutions to the world’s most pressing social challenges, empowered by a strong community that opens minds. York U is an internationally recognized research university – our 11 faculties and 25 research centres have partnerships with 200+ leading universities worldwide. Located in Toronto, York is the third largest university in Canada, with a strong community of 53,000 students, 7,000 faculty and administrative staff, and more than 300,000 alumni.

Scienmag May 1, 2019
Credit: Merritt Melancon/University of Georgia, used with permission STONEVILLE, MISSISSIPPI, May 1,…