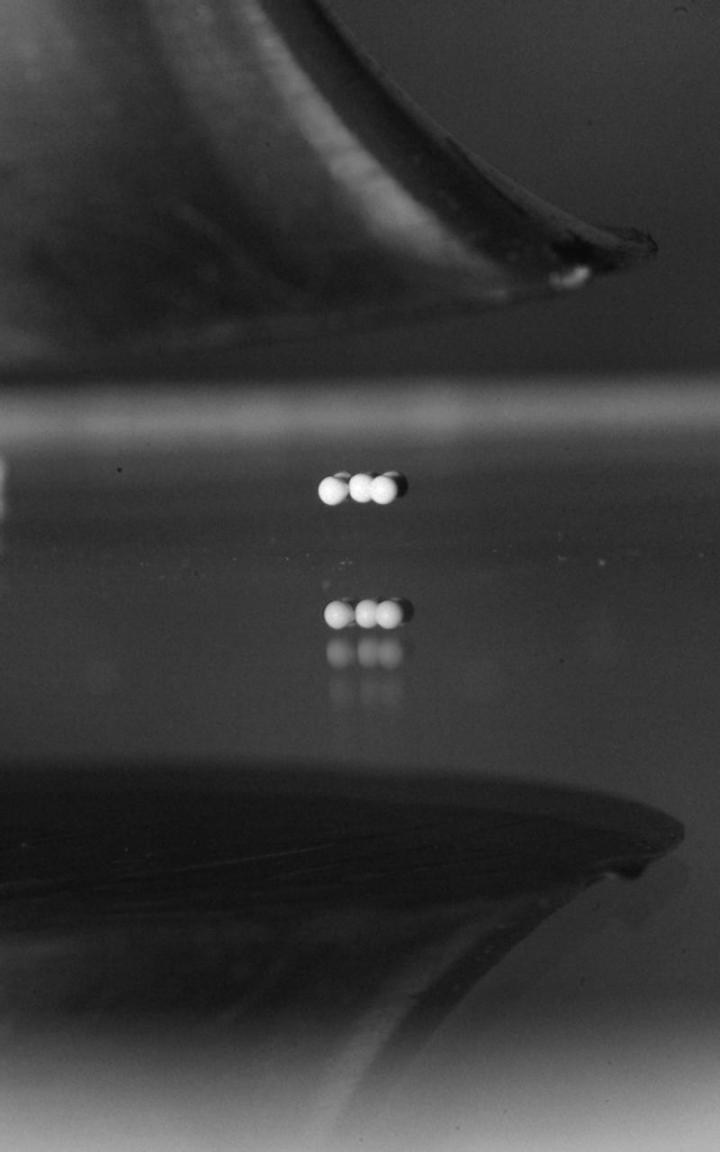 Scientists from the University of Chicago and the University of Bath used sound waves to levitate particles, revealing new insights about how materials cluster together in the absence of gravity–principles which underlie everything from how molecules assemble to the very early stages of planet formation from space dust.

“Much of the universe is made up of particles assembling,” said Heinrich Jaeger, the Sewell Avery Distinguished Service Professor of Physics, who co-authored a new study that appears in Nature Physics. “With acoustic levitation, we have a beautiful model system to study assembly at scales visible to the human eye, where we can track each particle with precision, and then relate the results to a wide range of often much more microscopic phenomena.”

Jaeger’s lab conducts innovative studies of the laws governing the interactions of particles–which they’ve used to create a robotic gripper to pick up almost any object and to explain a long-standing physics mystery that lets you run across the surface of a pool filled with water and corn starch.

In this case, the team was interested in the shape of prototypical clusters that form when, starting from a single particle, more are added one by one. They used sound waves to levitate plastic particles in midair–each about one millimeter in diameter, about the thickness of a penny–and studied how these particles interact with each other as they formed clusters, broke up and then reassembling into different configurations.

When there are five particles or fewer, they found, the particles cluster densely in only one configuration. However, when there are at least six particles, there are a number of different shapes they could assemble into when brought together tightly.

By using high-speed cameras to track the levitated particles, the researchers were able to capture these various configurations. They found that groups of six particles can form three distinct compact shapes: parallelogram, chevron and triangle. Adding one more particle to make seven meant that particles clustered together in one of four shapes, which scientists termed a flower, a turtle, a tree or a boat.

“Six particles is the minimum needed to change between different shapes, which is where things get interesting,” said co-first author Anton Souslov, then a UChicago postdoctoral researcher and now on the faculty at the University of Bath. “For us scientists, defying gravity to levitate dust also has this more fundamental interest of developing Earth-based experiments to understand how bodies in space like planets start to form.” This would be the very earliest stages, the scientists added, when the future planet is just a clump of space dust perhaps a centimeter across–before gravity starts to become a factor.

One unique aspect of the experiments is that the sound not only levitates the particles, but can also be used to affect how they interact as they float.

“A surprise was that by changing the sound wave frequency, we could manipulate the clusters and influence the shape that emerged,” said graduate student Melody Lim, the first author on the paper. Modeling the physics behind such acoustic forces, which was done by Souslov and professor of physics Vincenzo Vitelli, gives scientists a new means to control the assembly process.

They found that rearranging the shapes often depends on one particle acting as a “hinge” and swinging around the others to reconfigure, which could be very useful in a range of potential applications.

The research team now intends to look at how acoustic levitation can bring together larger numbers of particles to assemble more complex structures.