DeKalb, Ill. — Scientists at Northern Illinois University continue to hone extended-range weather forecasting, identifying patterns halfway around the globe that will heighten the probability weeks later for hail- and tornado-producing storms in the United States. 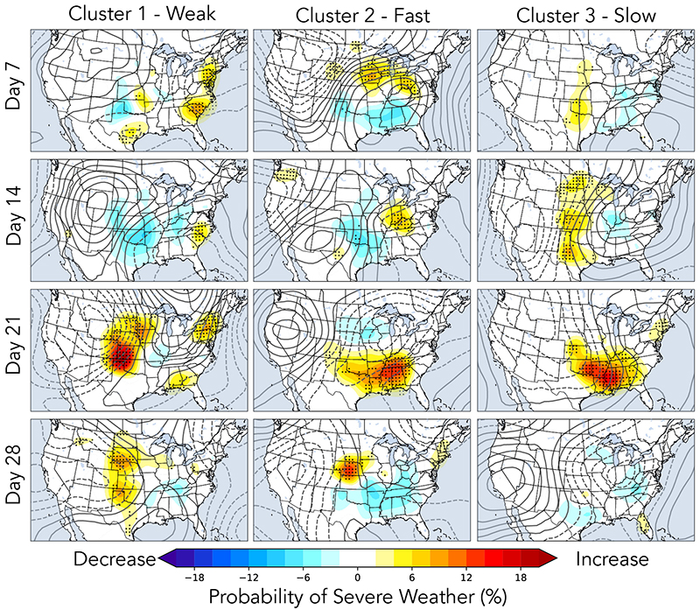 DeKalb, Ill. — Scientists at Northern Illinois University continue to hone extended-range weather forecasting, identifying patterns halfway around the globe that will heighten the probability weeks later for hail- and tornado-producing storms in the United States.

New research identifies three specific orientations of atmospheric phenomena occurring near the equator over the Maritime continent that increase the probability of severe U.S. weather events three to four weeks later. Using such information to create extended-range forecasts would provide more time to raise awareness of severe weather, and potentially save lives and property.

Combing through data from 1979–2019, the scientists found 100 instances of significant fluctuations that had occurred in the Madden-Julian Oscillation (MJO)—a major eastward moving disturbance of winds, rain and pressure—and looked for correlations to U.S. severe weather weeks later.

As an MJO moves eastward along the equator, it can weaken or strengthen as it crosses the islands of the Maritime Continent, which include Indonesia and the Philippines. Of the 100 identified MJO fluctuations, 53 of these storm clusters gained strength as they crossed the Maritime Continent and entered the Pacific Ocean, causing ripples in the atmosphere and eventually changing circulation patterns over North America.

The researchers used machine learning to separate characteristics of the 53 storm clusters according to location, strength and propagation speed. Composites of the clusters were then categorized as one of three “flavors”—weak, slow or fast.

“Our work highlights pathways forward for better prediction and understanding of how the Madden-Julian Oscillation clusters influence U.S tornado and hail frequency,” Miller said. “While not part of this study, we saw two bursts of maximum convection this spring. Each time we verified increases in severe U.S. weather three to four weeks later.”

Past research by NIU’s Gensini, who has pioneered extended-range forecasting, had identified MJO disturbances as an influencer on severe weather in the United States. In 2019, he led a team of scientists who reported that they accurately predicted the nation’s extensive tornado outbreak in May of that year—nearly four weeks before it began. During a 13-day stretch that month, 374 tornadoes occurred, more than triple the average.

Gensini said recurring MJO modes like those identified in the new study present “forecasts of opportunity,” providing enhanced predictability of the potential for severe weather frequency. Such opportunities do not always exist because often there is no recognizable pattern.

“This new work helps us catalogue weather patterns that present these forecasts of opportunity,” Gensini said. “We’re learning that there are quite a few different flavors this convection has in terms of modulating how the overall weather pattern sets up across the United States.”

MJO disturbances only happen once or twice each spring, so the sample size for the new study was limited, the authors said.

“The main caveat associated with this analysis is sample size,” Gensini said. “We are limited by the number of years in the study and the temporal frequency at which MJO events cycle in the North American springtime. If MJO events were examined over thousands of years, it would be likely that more than three clusters would emerge. Future work may focus on the issue of sample size by utilizing climate model simulations, allowing for more robust results.”

The research was supported by a grant to Gensini from the National Science Foundation, with computing resources provided by NIU’s Center for Research Computing and Data.