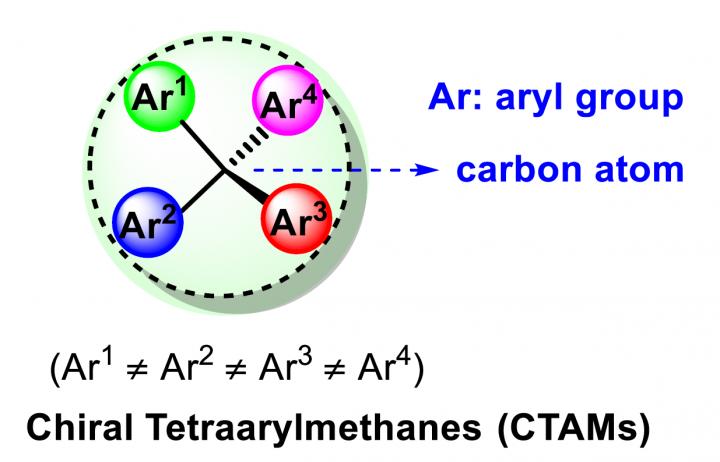 Credit: The Hong Kong University of Science and Technology

The research was published on the journal Nature Catalysis on December 14, 2020.

Chiral tetraarylmethanes (CTAMs), a unique family of spherical molecules which bear four different aryl groups with defined stereochemistry, remain as a mystery due to the lack of efficient asymmetric synthesis. The challenge in asymmetric synthesis of CTAMs lies in not only the high barrier in making the extremely congested C?C bond connecting the central carbon and the aryl rings by conventional strategies, but also the difficulty in stereodifferentiation between the existing and likely similar aryl rings when attaching a new aryl ring to the central carbon.

“The difficulty associated with the synthesis of chiral tetraarylmethanes is that forming extremely crowded bonds around a small carbon atom requires overcoming a substantial energy barrier,” said Jianwei Sun, the group’s leading researcher and Professor at the Department of Chemistry, HKUST. “The other difficulty is that the bond has to be made in a defined 3D orientation. These two requirements substantially reduce the chance of success, but we were able to overcome by using a tagging strategy.”

Starting from suitably tagged triarylmethanols, the protocol takes advantage of the hydrogen bonding interactions in the key para-quinone methide and indole iminium intermediates to build two libraries of enantioenriched CTAMs.

“Initially, we hypothesized that a racemic triarylmethane with a leaving group on the central carbon would be easily activated by a catalyst to generate the triarylmethyl cation intermediate,” Sun continued. “We tagged two of the three aryl groups differently. When a hydroxy group is attached to one of the aryl groups, the chiral ion pair intermediate could be further stabilized as a hydrogen-bonded quinone methide (QM). The other tag then provides a secondary hydrogen bond interaction to provide the key differentiation.”

Chiral spherical molecules synthesized with this method have shown promising activity against cancer cells as well as enterovirus. The group expects to establish a large and diversified library of such spherical molecules for lead optimization and structure activity relationship study, which would eventually lead to further collaborative opportunities with expertise in medicinal chemistry, chemical biology, viral biology, and pharmacology.

“High efficiency and selectivity are where our catalytic asymmetric approach really shines,” noted Sun. “We are excited to start this exploration of a new paradigm of chemical space previously left overlooked.”