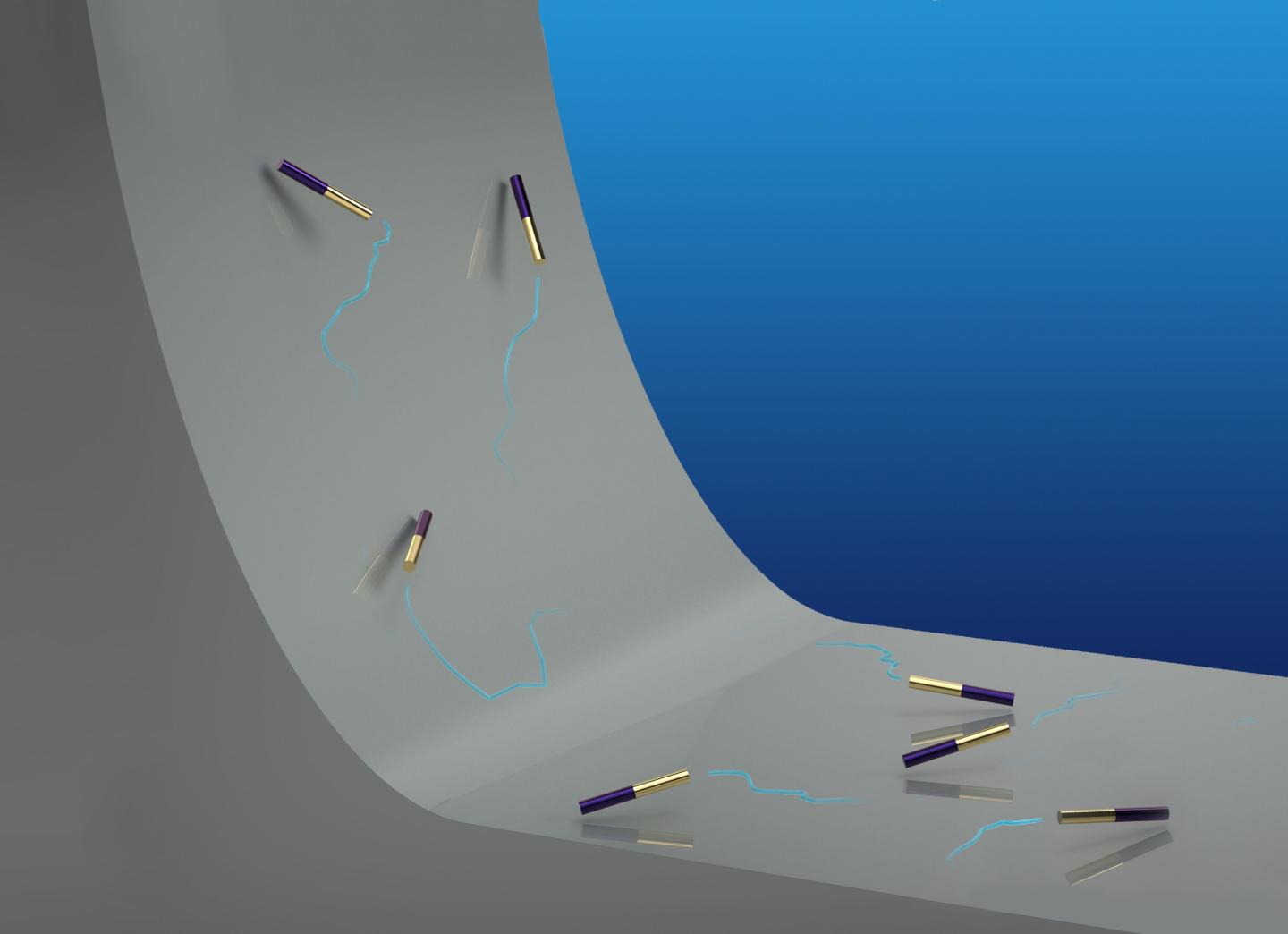 The findings, which appear in the journal Soft Matter, stem from a series of experiments in which motorized objects were placed in liquid and then moved up tilted surfaces.

“These ‘micro-swimmers’ are about 20 times heavier than the fluid they swim in, but they were able to climb steep slopes that are almost vertical,” explains Jun Zhang, one of the paper’s authors and a professor of physics and mathematics at New York University’s Courant Institute of Mathematical Sciences and NYU Shanghai.

The work enhances our understanding of “gravitaxis”–directional movement in response to gravity. The phenomenon is a vital consideration in not only engineering, but also in medicine and pharmaceutical development. It explains, in part, how bacteria move through the body and provides insights into ways to create more effective drug-delivery mechanisms.

In the Soft Matter research, the scientists created swimmers, or nanorods, whose length is roughly 1/40th the width of a strand of human hair. These motorized swimmers were tasked with moving up an inclined surface while immersed in a liquid solution within a walled container. The swimmers were composed of two types of metal–gold and rhodium as well as gold and platinum–a makeup that gave them unbalanced densities given the varying weights of these metals.

The swimmers’ composition, liquid environment, and juxtaposition of surfaces enabled them to move upward, despite their significant weight.

“These motors reorient themselves upward against gravity thanks to their density imbalance–much like a seesaw reorients itself in response to the movement and weight of its riders,” adds Michael Shelley, a professor at the Courant Institute and director of the Flatiron Institute’s Center for Computational Biology. “A hydrodynamic effect amplifies this movement–swimming next to a wall yields a bigger torque in repositioning the motors’ bodies upwards. This is important because the microscopic world is noisy–for the motor it’s always two steps up and one step down–and the bigger torque improves their ability to move vertically.”

In previous work, published in Physical Review Letters, Zhang, Shelley, and their colleagues created “nano-motors” in uncovering an effective means of movement against currents. The new research expands on these findings by revealing how heavy objects can move up steeply inclined surfaces, offering the promise of even more sophisticated maneuvers.

“Now that these micro-swimmers are able to climb very steep slopes against gravity, we can look toward developing even more difficult assignments,” observes Zhang. “Future, advanced motors will be designed to reach targeted locations and to perform designated functions.”

The study’s other co-authors included Quentin Brosseau, a post-doctoral researcher at the Courant Institute at the time of the research, Yang Wu, a doctoral candidate in NYU’s Department of Chemistry, Michael Ward, a professor in NYU’s Department of Chemistry, Leif Ristroph, an associate professor at the Courant Institute, Florencio Balboa Usabiaga of the Flatiron Institute, and Enkeleida Lushi of the New Jersey Institute of Technology.