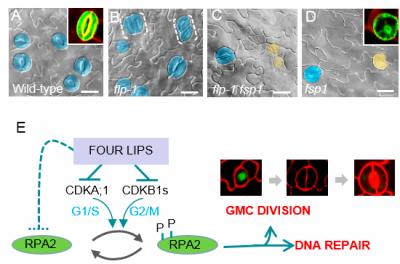 Stomata are plant-specific epidermal structures that consist of paired guard cells surrounding a pore. The opening and closing of these micro-valves facilitate carbon dioxide uptake for photosynthesis and reduce excessive water loss in plants.

Recently, a research group led by Prof. LE Jie at the Institute of Botany of the Chinese Academy of Sciences (IBCAS) found a genetic suppressor of flp stomatal defects. They found that RPA2a, a core subunit of Replication Protein A (RPA) complexes, acted downstream from the core cell cycle genes of CDKB1 to ensure terminal division during stomatal development and the formation of paired guard cells to create functional stomata units.

RPA is a heterotrimeric single-stranded DNA (ssDNA)-binding protein complex that is required for multiple aspects of DNA metabolism, including DNA replication, recombination, and repair. The homologues of each of the three RPA subunits (RPA1-3) are well conserved in eukaryotes, including humans.

LE’s group demonstrated that CDK-mediated phosphorylation at the N-terminus of RPA2a was essential for RPA functioning and localization. The scientists also showed that Serine-11 and Serine-21 are evolutionarily conserved CDK-phosphorylation sites. Furthermore, their results revealed that being phosphorylated by CDK was required for RPA2a to respond to DNA damage.

The study, entitled “A conserved but plant specific CDK-mediated regulation of DNA replication protein A2 in the precise control of stomatal terminal division,” was published online in PNAS on August 20, 2019. YANG Kezhen is the first author and LE Jie is the corresponding author.

This work was supported by the National Natural Science Foundation of China.

Protein aggregation: Protein assemblies relevant not only for neurodegenerative disease

Climate change affects the genetic diversity of a species