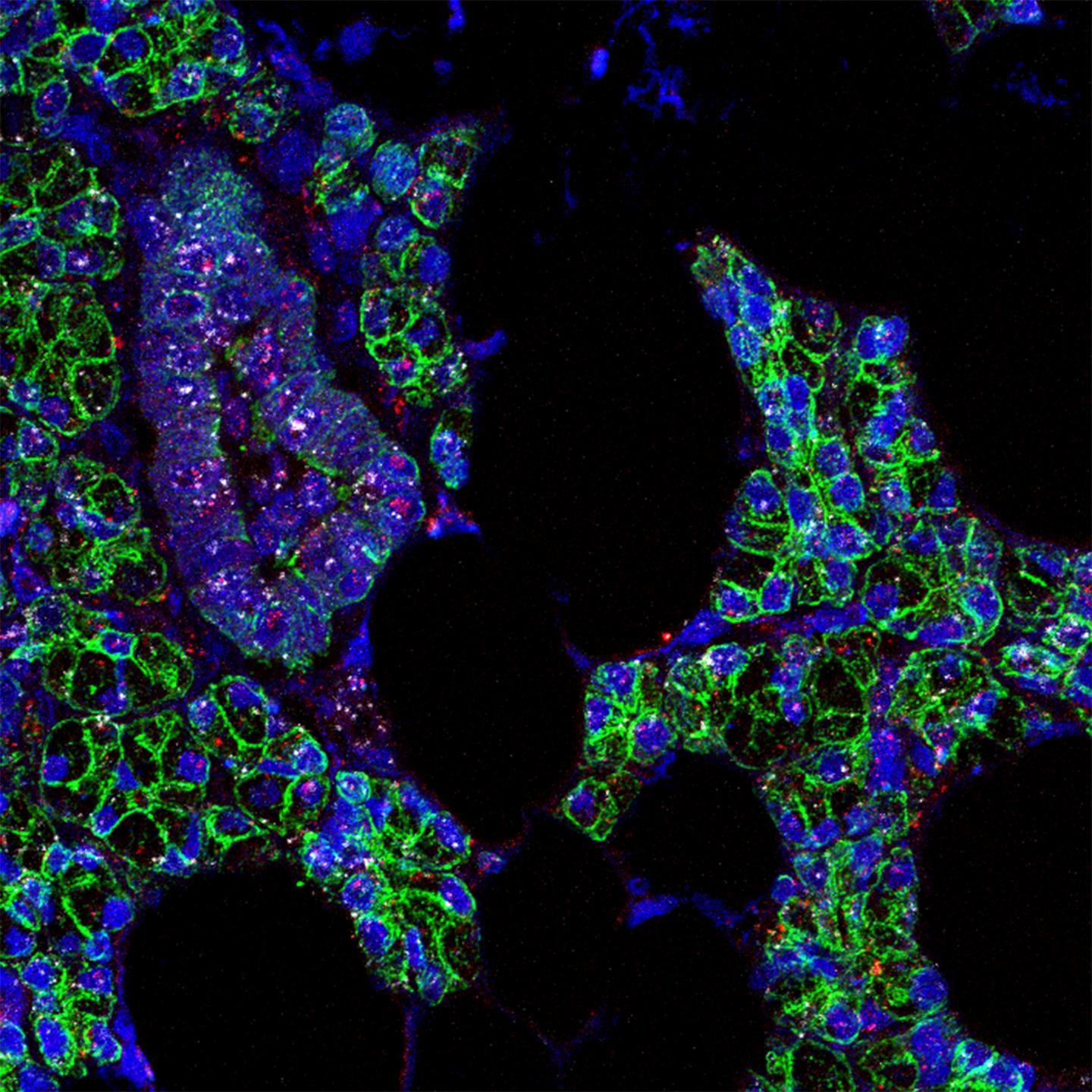 An international team of scientists has found evidence that SARS-CoV-2, the virus that causes COVID-19, infects cells in the mouth. While it’s well known that the upper airways and lungs are primary sites of SARS-CoV-2 infection, there are clues the virus can infect cells in other parts of the body, such as the digestive system, blood vessels, kidneys and, as this new study shows, the mouth. The potential of the virus to infect multiple areas of the body might help explain the wide-ranging symptoms experienced by COVID-19 patients, including oral symptoms such as taste loss, dry mouth and blistering. Moreover, the findings point to the possibility that the mouth plays a role in transmitting SARS-CoV-2 to the lungs or digestive system via saliva laden with virus from infected oral cells. A better understanding of the mouth’s involvement could inform strategies to reduce viral transmission within and outside the body. The team was led by researchers at the National Institutes of Health and the University of North Carolina at Chapel Hill.

“Due to NIH’s all-hands-on-deck response to the pandemic, researchers at the National Institute of Dental and Craniofacial Research were able to quickly pivot and apply their expertise in oral biology and medicine to answering key questions about COVID-19,” said NIDCR Director Rena D’Souza, D.D.S., M.S., Ph.D. “The power of this approach is exemplified by the efforts of this scientific team, who identified a likely role for the mouth in SARS-CoV-2 infection and transmission, a finding that adds to knowledge critical for combatting this disease.”

The study, published online March, 25, 2021 in Nature Medicine, was led by Blake M. Warner, D.D.S., Ph.D., M.P.H., assistant clinical investigator and chief of NIDCR’s Salivary Disorders Unit, and Kevin M. Byrd, D.D.S., Ph.D., at the time an assistant professor in the Adams School of Dentistry at the University of North Carolina at Chapel Hill. Byrd is now an Anthony R. Volpe Research Scholar at the American Dental Association Science and Research Institute. Ni Huang, Ph.D., of the Wellcome Sanger Institute in Cambridge, U.K., and Paola Perez, Ph.D., of NIDCR, were co-first authors.

Researchers already know that the saliva of people with COVID-19 can contain high levels of SARS-CoV-2, and studies suggest that saliva testing is nearly as reliable as deep nasal swabbing for diagnosing COVID-19. What scientists don’t entirely know, however, is where SARS-CoV-2 in the saliva comes from. In people with COVID-19 who have respiratory symptoms, virus in saliva possibly comes in part from nasal drainage or sputum coughed up from the lungs. But according to Warner, that may not explain how the virus gets into the saliva of people who lack those respiratory symptoms.

“Based on data from our laboratories, we suspected at least some of the virus in saliva could be coming from infected tissues in the mouth itself,” Warner said.

To explore this possibility, the researchers surveyed oral tissues from healthy people to identify mouth regions susceptible to SARS-CoV-2 infection. Vulnerable cells contain RNA instructions for making “entry proteins” that the virus needs to get into cells. RNA for two key entry proteins–known as the ACE2 receptor and the TMPRSS2 enzyme–was found in certain cells of the salivary glands and tissues lining the oral cavity. In a small portion of salivary gland and gingival (gum) cells, RNA for both ACE2 and TMPRSS2 was expressed in the same cells. This indicated increased vulnerability because the virus is thought to need both entry proteins to gain access to cells.

“The expression levels of the entry factors are similar to those in regions known to be susceptible to SARS-CoV-2 infection, such as the tissue lining the nasal passages of the upper airway,” Warner said.

Once the researchers had confirmed that parts of the mouth are susceptible to SARS-CoV-2, they looked for evidence of infection in oral tissue samples from people with COVID-19. In samples collected at NIH from COVID-19 patients who had died, SARS-CoV-2 RNA was present in just over half of the salivary glands examined. In salivary gland tissue from one of the people who had died, as well as from a living person with acute COVID-19, the scientists detected specific sequences of viral RNA that indicated cells were actively making new copies of the virus–further bolstering the evidence for infection.

Once the team had found evidence of oral tissue infection, they wondered whether those tissues could be a source of the virus in saliva. This appeared to be the case. In people with mild or asymptomatic COVID-19, cells shed from the mouth into saliva were found to contain SARS-CoV-2 RNA, as well as RNA for the entry proteins.

To determine if virus in saliva is infectious, the researchers exposed saliva from eight people with asymptomatic COVID-19 to healthy cells grown in a dish. Saliva from two of the volunteers led to infection of the healthy cells, raising the possibility that even people without symptoms might transmit infectious SARS-CoV-2 to others through saliva.

Finally, to explore the relationship between oral symptoms and virus in saliva, the team collected saliva from a separate group of 35 NIH volunteers with mild or asymptomatic COVID-19. Of the 27 people who experienced symptoms, those with virus in their saliva were more likely to report loss of taste and smell, suggesting that oral infection might underlie oral symptoms of COVID-19.

Taken together, the researchers said, the study’s findings suggest that the mouth, via infected oral cells, plays a bigger role in SARS-CoV-2 infection than previously thought.

“When infected saliva is swallowed or tiny particles of it are inhaled, we think it can potentially transmit SARS-CoV-2 further into our throats, our lungs, or even our guts,” said Byrd.

More research will be needed to confirm the findings in a larger group of people and to determine the exact nature of the mouth’s involvement in SARS-CoV-2 infection and transmission within and outside the body.

“By revealing a potentially underappreciated role for the oral cavity in SARS-CoV-2 infection, our study could open up new investigative avenues leading to a better understanding of the course of infection and disease. Such information could also inform interventions to combat the virus and alleviate oral symptoms of COVID-19,” Warner said.

This research was supported by the NIDCR Division of Intramural Research. Support also came from the National Institute of Diabetes and Digestive and Kidney Disease (NIDDK) grant DK034987 and the intramural programs of NIDDK, the National Cancer Institute, NIH Clinical Center, and the National Institute of Allergy and Infectious Diseases. Additional support came from the American Academy of Periodontology/Sunstar Foundation, American Lung Association, and the Cystic Fibrosis Foundation.

About the National Institute of Dental and Craniofacial Research:

NIDCR is the nation’s leading funder of research on oral, dental, and craniofacial health.

About the National Institutes of Health (NIH):

NIH, the nation’s medical research agency, includes 27 Institutes and Centers and is a component of the U.S. Department of Health and Human Services. NIH is the primary federal agency conducting and supporting basic, clinical, and translational medical research, and is investigating the causes, treatments, and cures for both common and rare diseases.