The recently-discovered atmospheric glow is both like typical auroras and distinct from them, new research finds 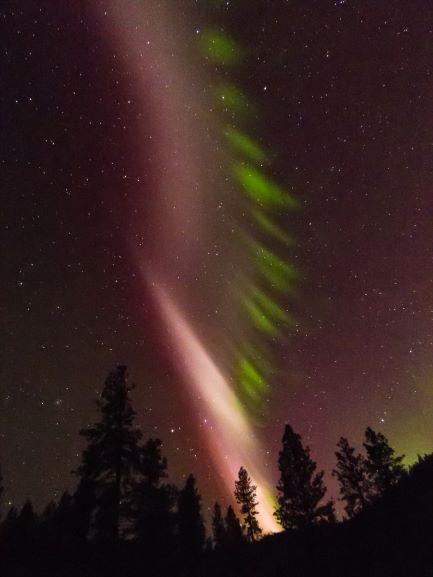 WASHINGTON–The celestial phenomenon known as STEVE is likely caused by a combination of heating of charged particles in the atmosphere and energetic electrons like those that power the aurora, according to new research. In a new study, scientists found STEVE’s source region in space and identified two mechanisms that cause it.

Last year, the obscure atmospheric lights became an internet sensation. Typical auroras, the northern and southern lights, are usually seen as swirling green ribbons spreading across the sky. But STEVE is a thin ribbon of pinkish-red or mauve-colored light stretching from east to west, farther south than where auroras usually appear. Even more strange, STEVE is sometimes joined by green vertical columns of light nicknamed the “picket fence.”

Auroras are produced by glowing oxygen and nitrogen atoms in Earth’s upper atmosphere, excited by charged particles streaming in from the near-Earth magnetic environment called the magnetosphere. Scientists didn’t know if STEVE was a kind of aurora, but a 2018 study found its glow is not due to charged particles raining down into Earth’s upper atmosphere.

The authors of the 2018 study dubbed STEVE a kind of “sky-glow” that is distinct from the aurora, but were unsure exactly what was causing it. Complicating the matter was the fact that STEVE can appear during solar-induced magnetic storms around Earth that power the brightest auroral lights.

Authors of a new study published in AGU’s journal Geophysical Research Letters analyzed satellite data and ground images of STEVE events and conclude that the reddish arc and green picket fence are two distinct phenomena arising from different processes. The picket fence is caused by a mechanism similar to typical auroras, but STEVE’s mauve streaks are caused by heating of charged particles higher up in the atmosphere, similar to what causes light bulbs to glow.

“Aurora is defined by particle precipitation, electrons and protons actually falling into our atmosphere, whereas the STEVE atmospheric glow comes from heating without particle precipitation,” said Bea Gallardo-Lacourt, a space physicist at the University of Calgary and co-author of the new study. “The precipitating electrons that cause the green picket fence are thus aurora, though this occurs outside the auroral zone, so it’s indeed unique.”

Images of STEVE are beautiful in themselves, but they also provide a visible way to study the invisible, complex charged particle flows in Earth’s magnetosphere, according to the study’s authors. The new results help scientists better understand how particle flows develop in the ionosphere, which is important goal because such disturbances can interfere with radio communications and affect GPS signals.

Where does STEVE come from?

In the new study, researchers wanted to find out what powers STEVE and if it occurs in both the Northern and Southern Hemispheres at the same time. They analyzed data from several satellites passing overhead during STEVE events in April 2008 and May 2016 to measure the electric and magnetic fields in Earth’s magnetosphere at the time.

The researchers then coupled the satellite data with photos of STEVE taken by amateur auroral photographers to figure out what causes the unusual glow. They found that during STEVE, a flowing “river” of charged particles in Earth’s ionosphere collide, creating friction that heats the particles and causes them to emit mauve light. Incandescent light bulbs work in much the same way, where electricity heats a filament of tungsten until it’s hot enough to glow.

Interestingly, the study found the picket fence is powered by energetic electrons streaming from space thousands of kilometers above Earth. While similar to the process that creates typical auroras, these electrons impact the atmosphere far south of usual auroral latitudes. The satellite data showed high-frequency waves moving from Earth’s magnetosphere to its ionosphere can energize electrons and knock them out of the magnetosphere to create the striped picket fence display.

The researchers also found the picket fence occurs in both hemispheres at the same time, supporting the conclusion that its source is high enough above Earth to feed energy to both hemispheres simultaneously.

Public involvement has been crucial for STEVE research by providing ground-based images and precise time and location data, according to Toshi Nishimura, a space physicist at Boston University and lead author of the new study.

“As commercial cameras become more sensitive and increased excitement about the aurora spreads via social media, citizen scientists can act as a ‘mobile sensor network,’ and we are grateful to them for giving us data to analyze,” Nishimura said.

Notes for Journalists
This paper is freely available through May 31. Journalists and public information officers (PIOs) can download a PDF copy of the article by clicking on this link:
https://agupubs.onlinelibrary.wiley.com/doi/pdf/10.1029/2019GL082460

Journalists and PIOs may also request a copy of the final paper by emailing Lauren Lipuma at [email protected] Please provide your name, the name of your publication, and your phone number.

Neither this paper nor this press release is under embargo.

“Magnetospheric signatures of STEVE: Implication for the magnetospheric energy source and inter-hemispheric conjugacy”

Scienmag May 22, 2019
Nearly half of patients saw improvements in their symptomsCredit: Children's Hospital of Philadelphia A new…

Showing how the tiniest particles in our universe saved us from…