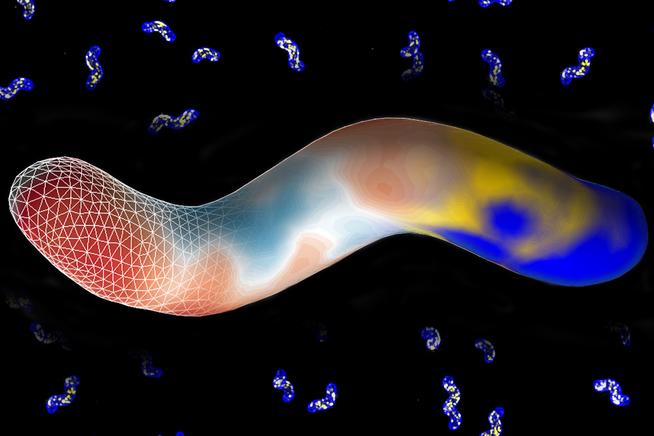 A new study shows how a common stomach bacterium is able to keep its corkscrew-like shape as it grows. Disrupting the shape could point the way for future, more-specialized antibiotics that prevent the bacterium from being harmful.

The study, published in eLife earlier this month by scientists at Fred Hutchinson Cancer Research Center, revealed that Helicobacter pylori maintains its helical shape by targeting cell-wall synthesis on opposite sides of the curvy-shaped bacterium. The team identified two proteins, MreB and CcmA, that balance cell-wall production in the right areas.

“In the case of H. pylori, its shape is key to its success as a pathogen,” said Dr. Nina Salama, a bacteriologist at Fred Hutch who led the study. “In our latest study we show for the first time how two proteins are responsible for giving the bacterium its twisty form, and without those proteins H. pylori cannot work.”

Salama is a member of the Human Biology and the Public Health Sciences Divisions at Fred Hutch. Her team was the first to demonstrate how important H. pylori‘s corkscrew shape is for its ability to infect its host. The distinctive shape helps it swim through stomach mucus, allowing it to cause an infection that can trigger ulcers and stomach cancer.

“Our latest findings take an important step toward understanding how H. pylori maintain their shape and how to design more specific antibiotics to target the infections they cause,” Salama said.

H. pylori infects about half of the world’s population. The bacterium burrows into mucus lining of the stomach and sets up long-term inflammation that can trigger ulcers and stomach cancer. Stomach cancer is the third-leading cause of cancer-related death worldwide, particularly in Asian countries.

The bacterium’s shape is dictated by the shape of its cell wall, a strong, flexible meshwork that contains its cellular contents. But how does H. pylori make itself helical? That’s a fundamental question that Jennifer Taylor, first author of the eLife paper and a graduate student in Salama’s lab, explored.

“Bacteria put a lot of effort into maintaining their shapes,” she said. “A deeper understanding of how the bacterium creates and maintains its shape even as it grows and divides could spur the development of more cell-wall attacking antibiotics.”

Taylor examined a variety of cell-wall building mechanism in H. pylori to figure out what strategy it was using to build its shape. It turns out that two proteins coordinated the growth:

The researchers also saw that H. pylori cells with defective CcmA achieve only a gentle curve, suggesting that disrupting the CcmA protein could help weaken the harm from the bacterium.

Though a tiny organism, H. pylori is still very large with respect to the molecules that set its shape pattern. Its shape doesn’t just help scientists spot H. pylori under the microscope; the bug’s corkscrew form is critical to its ability to escape stomach acid and anchor in for the long haul by swimming through the stomach’s mucus lining.

Antibiotics are already used to help prevent stomach cancer and ulcers by wiping out H. pylori — but they have downsides.

“Some of these antibiotics that target the cell wall wipe out lots of different bugs,” Salama said. “One of the goals of our research is to discover a more specific approach for a bug like Helicobacter. We could target its special shape to create a less-broad, more-specific antibiotic.”

They’re now looking beyond how the cell wall is created to how it is structured and changed over time and how the cell shape contributes to H. pylori‘s ability to colonize and survive in the stomach.

The National Institutes of Health, National Science Foundation and Department of Defense funded the research.

Note: Fred Hutch and its scientists who contributed to these discoveries may stand to benefit from their commercialization.

Ghostly particles detected in condensates of light and matter