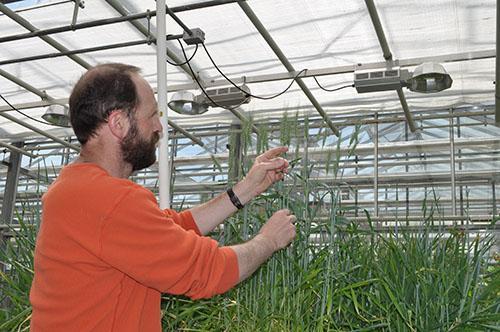 Fusarium Head Blight (FHB), also known as scab, is a significant disease of small grain cereals, such as wheat and barley, that impacts farmers around the world. The disease has been reducing acreage and increasing the price of wheat production in the United States since the early 1990s, which in turn increases costs for downstream producers, such as millers and brewers.

The disease is caused by a fungus that produces heat-stable trichothecene mycotoxins, which help the disease spread. To stop the spread, plant breeders are working to develop cultivars with improved resistance to FHB. A team of plant pathologists primarily based at Rutgers University recently generated wheat overexpressing two non-specific lipid transfer proteins and found that this enhanced protection against the fungus and led to a reduction of one of the major mycotoxins.

“We found that the AtLTp4.4 protein, from the large gene family of nsLTPs, had both antifungal and antioxidant properties,” said John McLaughlin. “This is the first study to show that nsLTPs have dual functions and the first study to explore how these functions contribute to FHB-resistance in wheat.”

The discovery that genes like nsLTPs can improve FHB-resistance in wheat adds to the catalog of genes that plant breeders can use in their breeding programs. This discovery also opens new research avenues for McLaughlin and his colleagues.

“We are exploring if nsLTP overexpression in barley can impact FHB resistance and if the increase of nsLTPs in the grain improves the antioxidant properties of malt,” said McLaughlin. “Additionally, nsLTPs are predicted to improve beer shelf life and flavor stability, and we will be testing that.”

Their research also highlights the need to better understand the connection between the induction of reactive oxygen species and mycotoxin production/accumulation in small grain cereals as the scientists found that application of trichothecenes to wheat leaf tissue and the accumulation of reactive oxygen species, independent of the fungus, can be significantly impacted by the overexpression of nsLTPs.

For more information, read “A Lipid Transfer Protein has Antifungal and Antioxidant Activity and Suppresses Fusarium Head Blight Disease and DON Accumulation in Transgenic Wheat” published in the April issue of Phytopathology.