Scientists discover a new genetic form of ALS in children 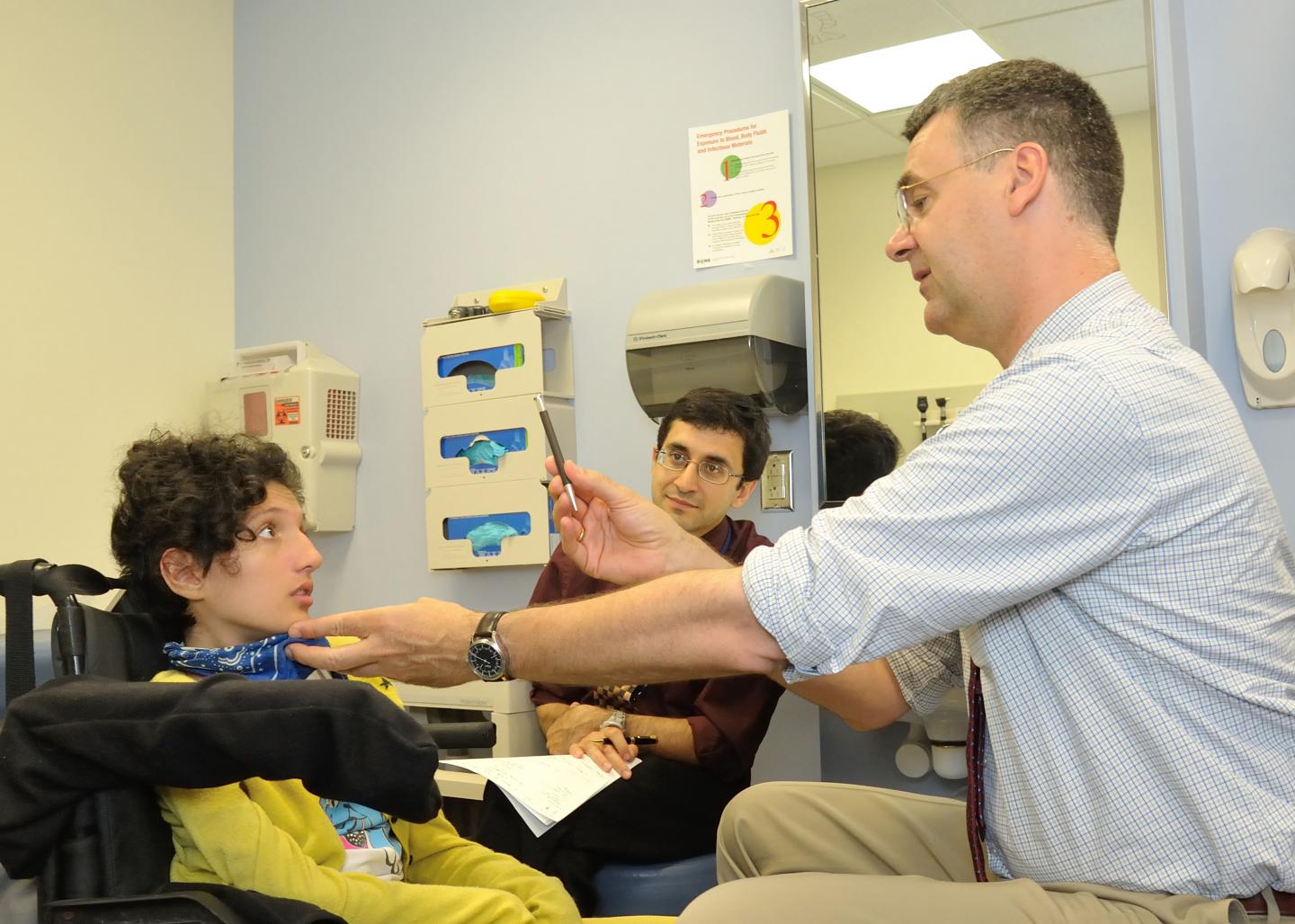 Credit: Courtesy of the NIH/NINDS.

In a study of 11 medical-mystery patients, an international team of researchers led by scientists at the National Institutes of Health and the Uniformed Services University (USU) discovered a new and unique form of amyotrophic lateral sclerosis (ALS). Unlike most cases of ALS, the disease began attacking these patients during childhood, worsened more slowly than usual, and was linked to a gene, called SPTLC1, that is part of the body’s fat production system. Preliminary results suggested that genetically silencing SPTLC1 activity would be an effective strategy for combating this type of ALS.

“ALS is a paralyzing and often fatal disease that usually affects middle-aged people. We found that a genetic form of the disease can also threaten children. Our results show for the first time that ALS can be caused by changes in the way the body metabolizes lipids,” said Carsten Bönnemann, M.D., senior investigator at the NIH’s National Institute of Neurological Disorders and Stroke (NINDS) and a senior author of the study published in Nature Medicine. “We hope these results will help doctors recognize this new form of ALS and lead to the development of treatments that will improve the lives of these children and young adults. We also hope that our results may provide new clues to understanding and treating other forms of the disease.”

Dr. Bönnemann leads a team of researchers that uses advanced genetic techniques to solve some of the most mysterious childhood neurological disorders around the world. In this study, the team discovered that 11 of these cases had ALS that was linked to variations in the DNA sequence of SPLTC1, a gene responsible for manufacturing a diverse class of fats called sphingolipids.

In addition, the team worked with scientists in labs led by Teresa M. Dunn, Ph.D., professor and chair at USU, and Thorsten Hornemann, Ph.D., at the University of Zurich in Switzerland. Together they not only found clues as to how variations in the SPLTC1 gene lead to ALS but also developed a strategy for counteracting these problems.

The study began with Claudia Digregorio, a young woman from the Apulia region of Italy. Her case had been so vexing that Pope Francis imparted an in-person blessing on her at the Vatican before she left for the United States to be examined by Dr. Bönnemann’s team at the NIH’s Clinical Center.

Like many of the other patients, Claudia needed a wheelchair to move around and a surgically implanted tracheostomy tube to help with breathing. Neurological examinations by the team revealed that she and the others had many of the hallmarks of ALS, including severely weakened or paralyzed muscles. In addition, some patients’ muscles showed signs of atrophy when examined under a microscope or with non-invasive scanners.

Nevertheless, this form of ALS appeared to be different. Most patients are diagnosed with ALS around 50 to 60 years of age. The disease then worsens so rapidly that patients typically die within three to five years of diagnosis. In contrast, initial symptoms, like toe walking and spasticity, appeared in these patients around four years of age. Moreover, by the end of the study, the patients had lived anywhere from five to 20 years longer.

“These young patients had many of the upper and lower motor neuron problems that are indicative of ALS,” said Payam Mohassel, M.D., an NIH clinical research fellow and the lead author of the study. “What made these cases unique was the early age of onset and the slower progression of symptoms. This made us wonder what was underlying this distinct form of ALS.”

The first clues came from analyzing the DNA of the patients. The researchers used next-generation genetic tools to read the patients’ exomes, the sequences of DNA that hold the instructions for making proteins. They found that the patients had conspicuous changes in the same narrow portion of the SPLTC1 gene. Four of the patients inherited these changes from a parent. Meanwhile, the other six cases appeared to be the result of what scientist call “de novo” mutations in the gene. These types of mutations can spontaneously occur as cells rapidly multiply before or shortly after conception.

Mutations in SPLTC1 are also known to cause a different neurological disorder called hereditary sensory and autonomic neuropathy type 1 (HSAN1). The SPLTC1 protein is a subunit of an enzyme, called SPT, which catalyzes the first of several reactions needed to make sphingolipids. HSAN1 mutations cause the enzyme to produce atypical and harmful versions of sphingolipids.

At first, the team thought the ALS-causing mutations they discovered may produce similar problems. However, blood tests from the patients showed no signs of the harmful sphingolipids.

“At that point, we felt like we had hit a roadblock. We could not fully understand how the mutations seen in the ALS patients did not show the abnormalities expected from what was known about SPTLC1 mutations,” said Dr. Bönnemann. “Fortunately, Dr. Dunn’s team had some ideas.”

For decades Dr. Dunn’s team had studied the role of sphingolipids in health and disease. With the help of the Dunn team, the researchers reexamined blood samples from the ALS patients and discovered that the levels of typical sphingolipids were abnormally high. This suggested that the ALS mutations enhanced SPT activity.

Similar results were seen when the researchers programmed neurons grown in petri dishes to carry the ALS-causing mutations in SPLTC1. The mutant carrying neurons produced higher levels of typical sphingolipids than control cells. This difference was enhanced when the neurons were fed the amino acid serine, a key ingredient in the SPT reaction.

Next, Dr. Dunn’s team performed a series of experiments which showed that the ALS-causing mutations prevent another protein called ORMDL from inhibiting SPT activity.

“Our results suggest that these ALS patients are essentially living without a brake on SPT activity. SPT is controlled by a feedback loop. When sphingolipid levels are high then ORMDL proteins bind to and slow down SPT. The mutations these patients carry essentially short circuit this feedback loop,” said Dr. Dunn. “We thought that restoring this brake may be a good strategy for treating this type of ALS.”

To test this idea, the Bönnemann team created small interfering strands of RNA designed to turn off the mutant SPLTC1 genes found in the patients. Experiments on the patients’ skin cells showed that these RNA strands both reduced the levels of SPLTC1 gene activity and restored sphingosine levels to normal.

“These preliminary results suggest that we may be able to use a precision gene silencing strategy to treat patients with this type of ALS. In addition, we are also exploring other ways to step on the brake that slows SPT activity,” said Dr. Bonnemann. “Our ultimate goal is to translate these ideas into effective treatments for our patients who currently have no therapeutic options.”