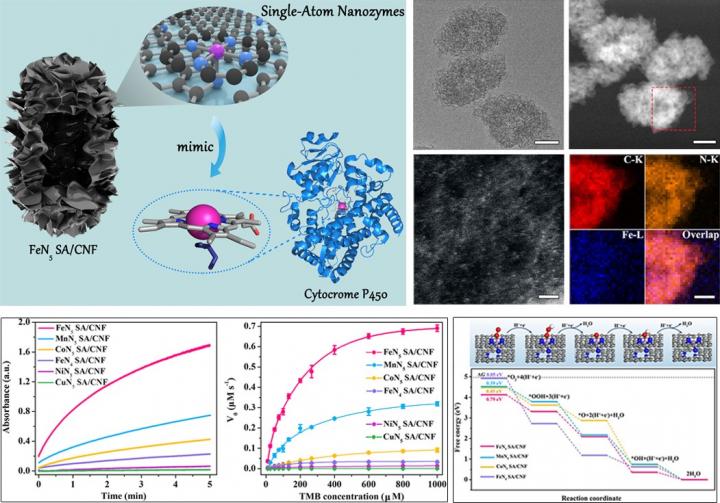 Nanozymes – catalytic nanomaterials with enzyme-like characteristics – offer the advantage of low cost, high stability, tunable catalytic activity and ease of mass production. For these reasons, they have been widely applied in biosensing, therapeutics and environmental protection.

However, the low density of active sites in nanozymes is related to much lower catalytic activity than with natural enzymes. In addition, their inhomogeneous elemental composition and facet structure-derived intricate catalytic mechanisms seriously restrict the extensive application of conventional nanozymes.

A research team led by Prof. DONG Shaojun from the Changchun Institute of Applied Chemistry (CIAC) of the Chinese Academy of Sciences discovered a new class of single-atom nanozymes, which integrates state-of-the-art single-atom technology with intrinsic enzyme-like active sites.

Furthermore, the catalytic property and the mechanism of single-atom nanozymes depend mainly upon the steric configuration of active centers, rather than the size, structure or facet of the supports. Thus, through altering the supported nanomaterials, certain types of active sites can be extended to general applications with definite enzyme-like mechanisms.

The study, published in Science Advances, shows that defined single-atom nanozymes provide a new perspective on the catalytic mechanism and rational design of nanozymes. They also show great potential for becoming the next generation of nanozymes.

A decade of renewable energy investment, led by solar, tops US $2.5…