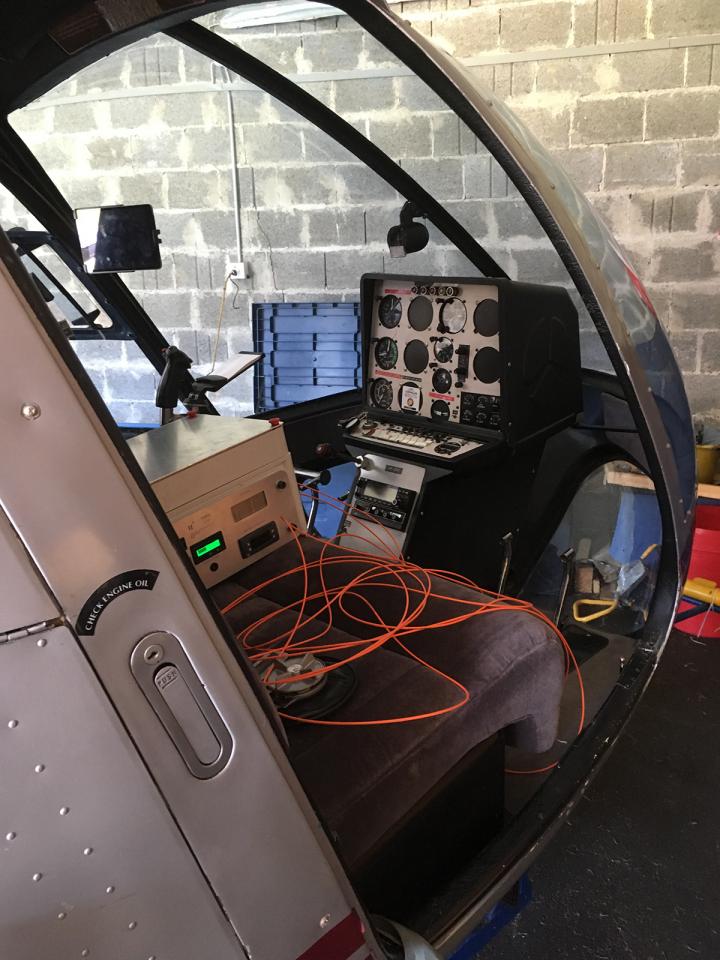 Left hands and right hands are almost perfect mirror images of each other. But whatever way they are twisted and turned, they cannot be superimposed onto each other. This is why the left glove simply won’t fit the right hand as well as it fits the left. In science, this property is referred to as chirality.

Just like hands are chiral, molecules can be chiral, too. In fact, most molecules in the cells of living organisms, such as DNA, are chiral. Unlike hands, however, that usually come in pairs of left and right, the molecules of life almost exclusively occur in either their “left-handed” or their “right-handed” version. They are homochiral, as researchers say. Why that is, is still not clear. But this molecular homochirality is a characteristic property of life, a so-called biosignature.

As part of the MERMOZ project (see info box), an international team led by the University of Bern and the National Centre of Competence in Research NCCR PlanetS, has now succeeded in detecting this signature from a distance of 2 kilometers and at a velocity of 70 kph. Jonas Kühn, MERMOZ project manager of the University of Bern and co-author of the study that has just been published in the journal Astronomy and Astrophysics, says: “The significant advance is that these measurements have been performed in a platform that was moving, vibrating and that we still detected these biosignatures in a matter of seconds.”

An instrument that recognizes living matter

“When light is reflected by biological matter, a part of the light’s electromagnetic waves will travel in either clockwise or counterclockwise spirals. This phenomenon is called circular polarization and is caused by the biological matter’s homochirality. Similar spirals of light are not produced by abiotic non-living nature”, says the first author of the study Lucas Patty, who is a MERMOZ postdoctoral researcher at the University of Bern and member of the NCCR PlanetS,

Measuring this circular polarization, however, is challenging. The signal is quite faint and typically makes up less than one percent of the light that is reflected. To measure it, the team developed a dedicated device called a spectropolarimeter. It consists of a camera equipped with special lenses and receivers capable of separating the circular polarization from the rest of the light.

Yet even with this elaborate device, the new results would have been impossible until recently. “Just 4 years ago, we could detect the signal only from a very close distance, around 20 cm, and needed to
observe the same spot for several minutes to do so”, as Lucas Patty recalls. But the upgrades to the instrument he and his colleagues made, allow a much faster and stable detection, and the strength of the signature in circular polarisation persists even with distance. This rendered the instrument fit for the first ever aerial circular polarization measurements.

Useful measurements on earth and in space

Using this upgraded instrument, dubbed FlyPol, they demonstrated that within mere seconds of measurements they could differentiate between grass fields, forests and urban areas from a fast moving helicopter. The measurements readily show living matter exhibiting the characteristic polarization signals, while roads, for example, do not show any significant circular polarization signals. With the current setup, they are even capable of detecting signals coming from algae in lakes.

After their successful tests, the scientists now look to go even further. “The next step we hope to take, is to perform similar detections from the International Space Station (ISS), looking down at the Earth. That will allow us to assess the detectability of planetary-scale biosignatures. This step will be decisive to enable the search for life in and beyond our Solar System using polarization”, says MERMOZ principal investigator and co-author Brice-Olivier Demory, professor of astrophysics at the University of Bern and member of the NCCR PlanetS says.

The sensitive observation of these circular polarization signals is not only important for future life detection missions. Lucas Patty explains: “Because the signal directly relates to the molecular composition of life and thus its functioning, it can also offer valuable complementary information in Earth remote sensing.” It can for instance provide information about deforestation or plant disease. It might even be possible to implement circular polarization in the monitoring of toxic algal blooms, of coral reefs and the effects of acidification thereon.

SAINT-EX – Search and characterisation of exoplanets

The SAINT-EX research group (funded by the SNF Professorship of Prof. Brice-Olivier Demory) focuses on the:

The MERMOZ (Monitoring planEtary suRfaces with Modern pOlarimetric characteriZation) project aims to investigate whether we can identify and characterize Earth’s life from space, by building a benchmark library of surface feature signatures with remote full-Stokes spectro-polarimetry. In this framework, our planet is considered as a proxy for other solar system bodies and exoplanets.

MERMOZ is a project in partnership between the Universities of Bern, Leiden and Delft (NL).

The project’s feasibility study is funded by the Centre for Space and Habitability (CSH) and the NCCR PlanetS.

Since its involvement in the first moon landing in 1969, the University of Bern has been participating in space missions of the major space organizations, such as ESA, NASA, ROSCOSMOS and JAXA. It is currently co-leading the European Space Agency’s (ESA) CHEOPS mission with the University of Geneva. In addition, Bernese researchers are among the world leaders when it comes to models and simulations of the formation and development of planets.

With the discovery of the first exoplanet, the University of Geneva positioned itself as one of the leading institutions in the field. This led, for example, to the construction and installation of the HARPS spectrograph on ESO’s 3.6 m telescope at La Silla in 2003 under Geneva’s leadership. This was followed by the ESPRESSO instrument on ESO’s VLT telescope in Paranal. The “Science Operation Center” of the CHEOPS mission is also in Geneva.

ETH Zurich and the University of Zurich are also partner institutions in the NCCR PlanetS. Scientists from the fields of Astrophysics, Data Processing and Earth Sciences lead projects and make important contributions to NCCR PlanetS research. In addition, ETH is a world leader in instrumentation for various observatories and space missions.

The NCCR PlanetS is organized into the following research areas:

-Architecture of planetary systems, their formation and evolution

-Atmospheres, surfaces and the interior of planets

-Determination of the habitability of planets.

Bernese space exploration: With the world’s elite since the first moon landing

When the second man, “Buzz” Aldrin, stepped out of the lunar module on July 21, 1969, the first task he did was to set up the Bernese Solar Wind Composition experiment (SWC) also known as the “solar wind sail” by planting it in the ground of the moon, even before the American flag. This experiment, which was planned and the results analyzed by Prof. Dr. Johannes Geiss and his team from the Physics Institute of the University of Bern, was the first great highlight in the history of Bernese space exploration.

Ever since Bernese space exploration has been among the world’s elite. The University of Bern has been participating in space missions of the major space organizations, such as ESA, NASA, ROSCOSMOS and JAXA. It is currently co-leading the European Space Agency’s (ESA) CHEOPS mission with the University of Geneva. In addition, Bernese researchers are among the world leaders when it comes to models and simulations of the formation and development of planets.