NEW YORK, October 20, 2021 — A multi-institutional research team has designed nanoparticles that can communicate with and slow the development of cancer cells. The work — detailed in a newly published paper in Advanced Materials — has uncovered a novel framework for the potential development of drug-free cancer therapies. 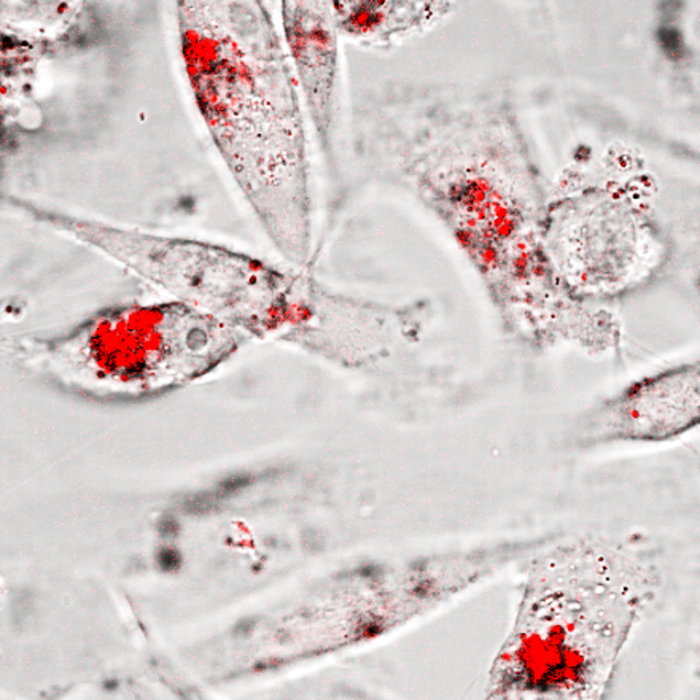 Credit: Richard Huang and Ye He

NEW YORK, October 20, 2021 — A multi-institutional research team has designed nanoparticles that can communicate with and slow the development of cancer cells. The work — detailed in a newly published paper in Advanced Materials — has uncovered a novel framework for the potential development of drug-free cancer therapies.

Led by scientists at the Advanced Science Research Center at the Graduate Center, CUNY (CUNY ASRC), the research team was able to design nanoparticles that are activated to self-assemble when they encounter cancer cells and send messages to instruct the cells to slow their growth. Because the nanoparticles communicate only with the cancer cells, the surrounding healthy cells aren’t impacted.

“Cancer cells take up materials from their environment, and they also secrete factors that help them degrade surrounding tissue in order to spread and metastasize,” said Richard Huang, lead author of the paper, a Ph.D. student at the Graduate Center, CUNY (GC CUNY), and a researcher with the CUNY ASRC Nanoscience Initiative and the Center for Discovery and Innovation at CUNY’s City College of New York (CCNY). “We made particles that respond to both of these characteristics by aggregating into clusters that are actively taken up by cancer cells. Once inside, they appear to be able to reduce the cancer cells’ metabolic activity and consequently reduce their growth.”

One reason the progression of cancer is difficult to control is that the cells secrete an abnormally large amount of the matrix metalloproteinase-9 (MMP-9) enzyme, which breaks down the collagen that holds together healthy tissue. The research team was able to use this feature against the cancer cells. This is achieved by designing nanoparticles that when triggered by MMP-9, begin assembling to large aggregates in the cells’ vicinity. The cells engulf these aggregates, and their size causes physical distress to the cancer cells and reduces their ability to proliferate and survive.

One highlight of the study is that the researchers were able to use confocal reflection microscopy to visualize the nanoparticle aggregates inside the cancer cells in real-time. “This label-free, live imaging technique allowed us to have a closer look at when and where the aggregates were formed, and how the cancer cells respond to the particles at the sub-cellular level,” said Ye He, director of the Live Imaging and Bioenergetics Facility in the CUNY ASRC Neuroscience Initiative.

“Through this research, we wanted to determine whether it’s possible to make use of relatively simple peptide design to create nanoparticles that could produce robust self-assembly in biological media and have an impact on cancer cells,” said Rein Ulijn, director of the CUNY ASRC Nanoscience Initiative and the study’s principal investigator. “While this is early-stage research, the findings provide exciting possibilities for a drug-free therapeutic treatment that could be extremely useful for cancer patients who have developed drug resistance and for extending the lives of people with metastatic cancer.”

Further studies are needed to fully access the therapeutic potential of the team’s discovery.

About the Advanced Science Research Center
The Advanced Science Research Center at the Graduate Center, CUNY (CUNY ASRC) elevates scientific research and education at The City University of New York and beyond through initiatives in five distinctive, but increasingly interconnected disciplines: environmental sciences, nanoscience, neuroscience, photonics, and structural biology. The CUNY ASRC promotes a collaborative, interdisciplinary research culture with renowned researchers from each of the initiatives working side-by-side in the CUNY ASRC’s core facilities, sharing equipment that is among the most advanced available.