Scientists have identified a chemical pathway to an innovative insulating nanomaterial that could lead to large-scale industrial production for a variety of uses – including in spacesuits and military vehicles. The nanomaterial — thousands of times thinner than a human hair, stronger than steel and noncombustible — could block radiation to astronauts and help shore up military vehicle armor, for example. 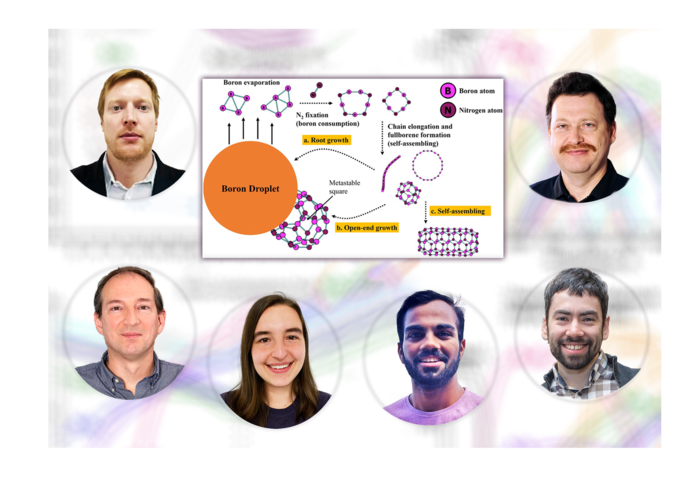 Scientists have identified a chemical pathway to an innovative insulating nanomaterial that could lead to large-scale industrial production for a variety of uses – including in spacesuits and military vehicles. The nanomaterial — thousands of times thinner than a human hair, stronger than steel and noncombustible — could block radiation to astronauts and help shore up military vehicle armor, for example.

Collaborative researchers at the U.S. Department of Energy’s (DOE) Princeton Plasma Physics Laboratory (PPPL) have proposed a step-by-step chemical pathway to the precursors of this nanomaterial, known as boron nitride nanotubes (BNNT), which could lead to their large-scale production.

The breakthrough brings together plasma physics and quantum chemistry and is part of the expansion of research at PPPL. “This is pioneering work that takes the Laboratory in new directions,” said PPPL physicist Igor Kaganovich, principal investigator of the BNNT project and co-author of the paper that details the results in the journal Nanotechnology.

Collaborators identified the key chemical pathway steps as the formation of molecular nitrogen and small clusters of boron, which can chemically react together as the temperature created by a plasma jet cools, said lead author Yuri Barsukov of the Peter the Great St. Petersburg Polytechnic University. He developed the chemical reaction pathways by performing quantum chemistry simulations with the assistance of Omesh Dwivedi, a PPPL intern from Drexel University, and Sierra Jubin, a graduate student in the Princeton Program in Plasma Physics.

The interdisciplinary team included Alexander Khrabry, a former PPPL researcher now at Lawrence Livermore National Laboratory who developed a thermodynamic code used in this research, and PPPL physicist Stephane Ethier who helped the students compile the software and set up the simulations.

The results solved the mystery of how molecular nitrogen, which has the second strongest chemical bond among diatomic, or double-atom molecules, can nonetheless break apart through reactions with boron to form various boron-nitride molecules, Kaganovich said. “We spent considerable amount of time thinking about how to get boron – nitride compounds from a mixture of boron and nitrogen,” he said. “What we found was that small clusters of boron, as opposed to much larger boron droplets, readily interact with nitrogen molecules. That’s why we needed a quantum chemist to go through the detailed quantum chemistry calculations with us.”

BNNTs have properties similar to carbon nanotubes, which are produced by the ton and found in everything from sporting goods and sportswear to dental implants and electrodes. But the greater difficulty of producing BNNTs has limited their applications and availability.

Demonstration of a chemical pathway to the formation of BNNT precursors could facilitate BNNT production. The process of BNNT synthesis begins when scientists use a 10,000-degree plasma jet to turn boron and nitrogen gas into plasma consisting of free electrons and atomic nuclei, or ions, embedded in a background gas. This shows how the process unfolds:

• The jet evaporates the boron while the molecular nitrogen largely stays intact;

• The boron condenses into droplets as the plasma cools;

• The droplets form small clusters as the temperature falls to a few thousand degrees;

• The critical next step is the reaction of nitrogen with small clusters of boron molecules to form boron-nitrogen chains;

• The chains grow longer by colliding with one another and fold into precursors of boron nitride nanotubes.

“During the high-temperature synthesis the density of small boron clusters is low,” Barsukov said. “This is the main impediment to large-scale production.”

“The beauty of this work,” he added, “is that since we had experts in plasma and fluid mechanics and quantum chemistry we could go through all these processes together in an interdisciplinary group. Now we need to compare possible BNNT output from our model with experiments. That will be the next stage of modeling.”

Support for this research comes from the DOE Office of Science.