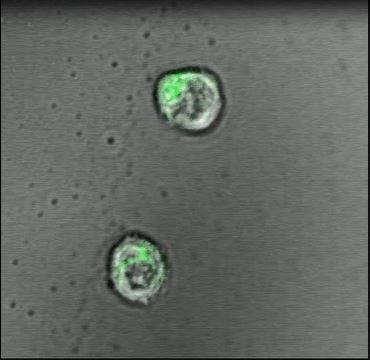 In a proof-of-principle study in mice, scientists at Johns Hopkins Medicine report the creation of a specialized gel that acts like a lymph node to successfully activate and multiply cancer-fighting immune system T-cells. The work puts scientists a step closer, they say, to injecting such artificial lymph nodes into people and sparking T-cells to fight disease.

In the past few years, a wave of discoveries has advanced new techniques to use T-cells — a type of white blood cell — in cancer treatment. To be successful, the cells must be primed, or taught, to spot and react to molecular flags that dot the surfaces of cancer cells. The job of educating T-cells this way typically happens in lymph nodes, small, bean-shaped glands found all over the body that house T-cells. But in patients with cancer and immune system disorders, that learning process is faulty, or doesn’t happen.

To address such defects, current T-cell booster therapy requires physicians to remove T-cells from the blood of a patient with cancer and inject the cells back into the patient after either genetically engineering or activating the cells in a laboratory so they recognize cancer-linked molecular flags.

One such treatment, called CAR-T therapy, is costly and available only at specialized centers with laboratories capable of the complicated task of engineering T-cells. In addition, it generally takes about six to eight weeks to culture the T-cells in laboratories and, once reintroduced into the body, the cells don’t last long in the patient’s body, so the effects of the treatment can be short-lived.

The new work, reported April 10 in the journal Advanced Materials, is a bid by Johns Hopkins scientists to find a more efficient way of engineering T-cells.

“We believe that a T-cell’s environment is very important. Biology doesn’t occur on plastic dishes; it happens in tissues,” says John Hickey, a Ph.D. candidate in biomedical engineering at the Johns Hopkins University School of Medicine and first author of the study report.

To make the engineered T-cells’ environment more biologically realistic, Hickey — working with his mentors Hai-Quan Mao, Ph.D., associate director of the Johns Hopkins Institute for NanoBioTechnology and Jonathan Schneck, M.D., Ph.D., professor of pathology, medicine and oncology at the Johns Hopkins University School of Medicine — tried using a jelly-like polymer, or hydrogel, as a platform for the T-cells. On the hydrogel, the scientists added two types of signals that stimulate and “teach” T-cells to hone in on foreign targets to destroy.

Because hydrogels can be made to order, the Johns Hopkins scientists created and tested a range of hydrogels, from the very soft feel of a single cell to the more rigid quality of a cell-packed lymph node.

“One of the surprising findings was that T-cells prefer a very soft environment, similar to interactions with individual cells, as opposed to a densely packed tissue,” says Schneck.

When the Johns Hopkins team put T-cells onto a soft hydrogel, they found that the T-cells multiplied from just a few cells to about 150,000 cells — plenty to use for cancer therapy — within seven days. By contrast, when the scientists used other conventional methods to stimulate and expand T-cells, they were able to culture only 20,000 cells within seven days.

In the next set of experiments, the scientists injected the T-cells engineered in either the soft hydrogels or the plastic culture dishes into mice implanted with melanoma, a lethal form of skin cancer. Tumors in mice with T-cells cultured on hydrogels remained stable in size, and some of the mice survived beyond 40 days. By contrast, tumors grew in most of the mice injected with T-cells cultured in plastic dishes, and none of these mice lived beyond 30 days.

“As we perfect the hydrogel and replicate the essential feature of the natural environment, including chemical growth factors that attract cancer-fighting T-cells and other signals, we will ultimately be able to design artificial lymph nodes for regenerative immunology-based therapy,” says Schneck, a member of the Johns Hopkins Kimmel Cancer Center.

The scientists have filed for patents related to the hydrogel technology described in their report.

Antimicrobial paints have a blind spot

Scienmag Aug 12, 2019
Two-fold test is capable of detecting and determining the type of human papillomavirus infection as well as the…

Elucidation of the atomic-level mechanism by which pathogenic bacteria…