Scent brings all the songbirds to the yard 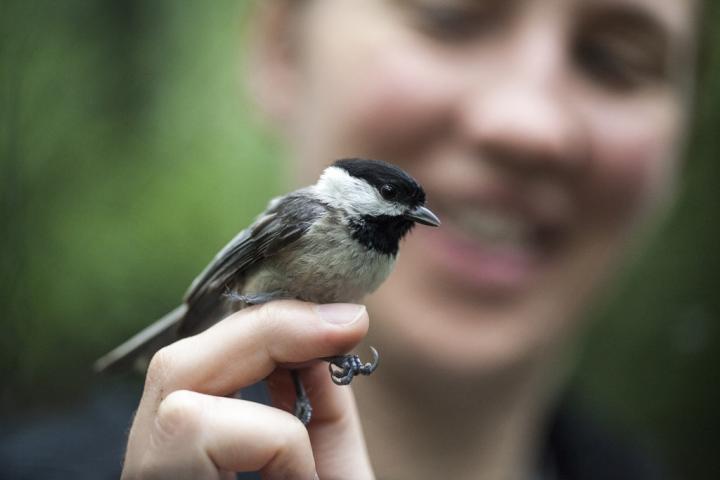 Chickadees can smell! That is the news from a study out of Lehigh University, the first to document naturally hybridizing songbirds’ preference for the scent of their own species.

Amber Rice, an evolutionary biologist at Lehigh, studies natural hybridization-when separate species come into contact and mate-to better understand how species originate and how existing species are maintained. The two species that make up the hybridized population she studies are the black-capped chickadee and its relative the Carolina chickadee.

Rice and Ph.D. student, Alex Van Huynh, set out to test the potential for scent to act as a mate choice cue, contributing to reproductive isolation between the black-capped and Carolina chickadees who live in the “hybrid zone” in the eastern Pennsylvania region where Lehigh is located.

Huynh and Rice found that both black-capped and Carolina chickadees produce chemically distinct natural oils. Testing both males and females of both chickadee species, they found that males and females prefer the smell of their own species over the smell of the opposite species. These preferences could be impacting hybridization. Their results have been published in an article entitled: “Conspecific olfactory preferences and interspecific divergence in odor cues in a chickadee hybrid zone” in Ecology and Evolution.

“The sense of smell has been very understudied in birds, particularly songbirds, because they frequently have such impressive plumage and song variation,” says Rice. “Some other recent work has documented that species of songbird can smell and prefer their species’ odors, but this is the first example in currently hybridizing species that we know of.”

“Our results show that not only can odor cues be used by songbirds, potentially as a mate choice cue, but that they can have ecological and evolutionary consequences for songbird species,” adds Huynh.

The black-capped and Carolina chickadees interbreed with one another, but their hybrid offspring suffer fitness costs. For example, the interbred chickadees are less likely to hatch from their eggs, and they have lower cognitive abilities than pure-species birds.

Interestingly, the researchers found that the chickadees they studied do not actively avoid the smell of the other species.

“This fact may be coincident with the observation that hybridization still does indeed take place,” says Huynh. “We know the hybrid zone is very small and its width is stable over time. In other words, the geographic area of hybridization is not growing or shrinking.”

Birds of the same smell, tend to gel

Huynh and Rice caught wild birds from hybrid zone populations in Pennsylvania. They used gas-chromatography mass-spectrometry to analyze differences between the species in the natural oils the birds produce from their uropygial glands (also known as the preen glands). They tested for the species’ odor preference using a Y-maze, measuring the amount of time a bird spends with a particular smell.

The experiments indicated a clear preference for same-species whole-body odors in both species of chickadees. These preferences were present in both male and female birds. The results, the team says, are consistent with a possible role for olfactory signaling in premating reproductive isolation in chickadees.

“Within the hybrid zone, the two species show differences in their uropygial oil chemistry as well as significant preferences for their own species over those of the other species,” says Rice.

The team believes that researchers in the fields of animal behavior and chemical ecology will find their study particularly interesting. Investigating odor in future studies of songbird behavior such as mate choice, predation risk assessment, or competitive interactions, are some promising avenues for future inquiry.

The research was supported by Lehigh University and the National Science Foundation, as well as research grants from the Society for the Study of Evolution (The Rosemary Grant Award) and the Animal Behavior Society.

It’s not you, it’s the network

Scienmag Oct 30, 2019
New adhesive that binds wet surfaces within seconds could be used to heal wounds or implant medical devicesCredit:…

New role for a driver of metastatic cancers