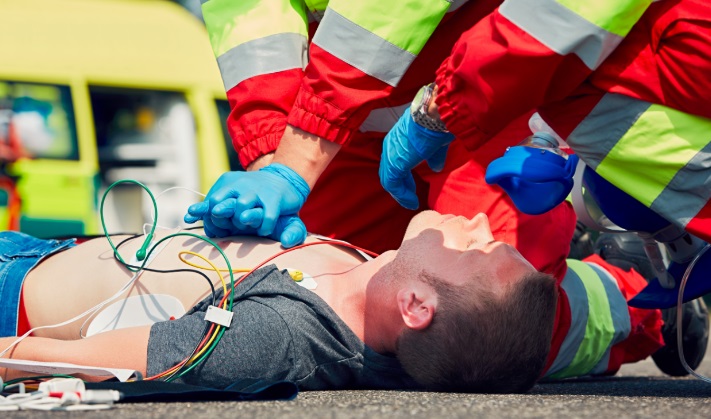 Heart scans for patients with chest pains could save thousands of lives in the UK, research suggests. The life-saving scans helped to spot those with heart disease so they could be given treatments to prevent heart attacks.

Researchers say current guidelines should be updated to incorporate the scans into routine care.

The SCOT-HEART study tracked more than 4000 patients who were referred to a hospital clinic with symptoms of angina – a condition that restricts the blood supply to the heart.

Half of the patients were given a scan called a computed tomography angiogram, or CTA, in addition to standard diagnostic tests.

After receiving the scan, the number of patients suffering a heart attack within five years dropped by 40 per cent, the study found.

The number of patients undergoing additional procedures increased within the first year but had levelled out by the end of the five-year period. This suggests that including the scans in routine care would not lead to a surge in costly tests or additional heart surgery, the researchers say.

Patients who are at risk of a heart attack are frequently diagnosed with a test called an angiogram. This involves inserting tubes into the body and heart to check the flow of blood and identify any obstructions that could pose a heart attack risk.

CTA scans enable doctors to look at the blood vessels from the outside the body, without the need to insert tubes into the heart. The scans are cheaper, quicker and safer than angiograms.

The study had previously found that around a quarter of patients had their diagnoses reclassified after receiving the scan, prompting new treatments in many cases.

This is the first study to look at the impact of the scans on long-term survival rates.

Lead researcher Professor David Newby, of the BHF Centre for Cardiovascular Science at the University of Edinburgh, said: “This relatively simple heart scan ensures that patients get the right treatment. This is the first time that CT guided management has been shown to improve patient outcomes with a major reduction in the future risk of heart attacks. This has major implications for how we now investigate and manage patients with suspected heart disease.”

The research is published in the New England Journal of Medicine and is being presented at the European Society of Cardiology Annual Congress in Munich. The study was funded by the Chief Scientist Office of the Scottish Government and the British Heart Foundation.

Too much of a good thing? Very high levels of ‘good’ cholesterol may be harmful

Revving up the engine

Two honored for remarkable achievement and outstanding leadership in cardiothoracic…

Scienmag Oct 29, 2019
Quantum mechanics is embracing patterns of light to create an alphabet that can be leveraged to build a light-based…

Ecological impacts of palm stearin spill to the coastal ecosystem