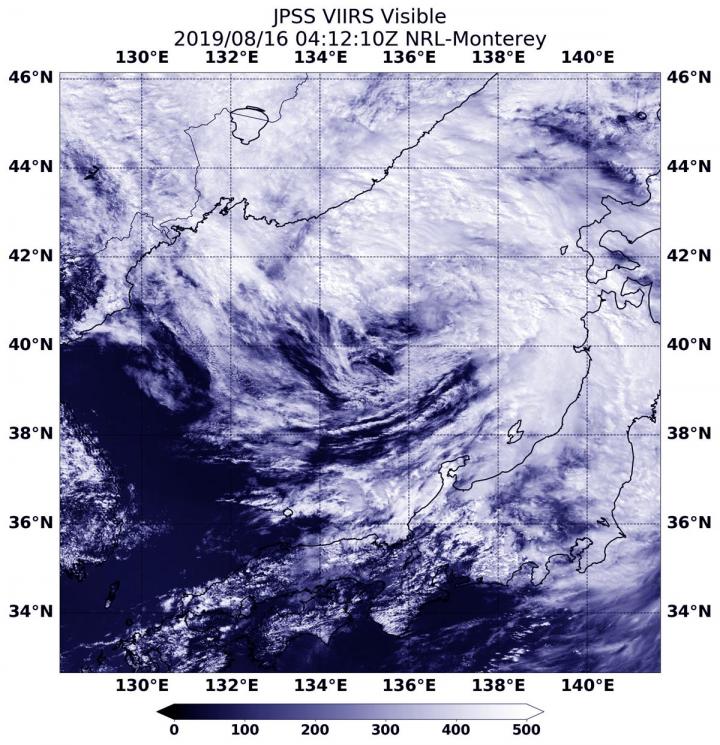 Tropical Storm Krosa continued to erode after it moved into the Sea of Japan and satellite data showed it as a ragged and shapeless storm on August 16, 2019.

The center of Tropical Storm Krosa’s circulation was difficult to pinpoint in the Aug. 16 visible image from the Visible Infrared Imaging Radiometer Suite (VIIRS) instrument aboard the NOAA-20 satellite. NOAA-20 passed over the Sea of Japan at 12:12 a.m. EDT (0412 UTC) and the VIIRS instrument provided a view of the shapeless storm. The bulk of clouds associated with the storm was north of the center.

The Joint Typhoon Warning Center or JTWC issued their final bulletin on Krosa at 0300 UTC on Aug. 16 (11 p.m. EDT on Aug. 15). At that time Tropical Storm Krosa was located near 39.4 degrees north latitude and 134.9 east longitude, about 296 miles west-southwest of Misawa, Japan. Krosa was moving to the north-northeast and had maximum sustained winds 35 knots (40 mph).

During this time Krosa was becoming extra-tropical. That means that a tropical cyclone has lost its “tropical” characteristics. The National Hurricane Center defines “extra-tropical” as a transition that implies both poleward displacement (meaning it moves toward the north or south pole) of the cyclone and the conversion of the cyclone’s primary energy source from the release of latent heat of condensation to baroclinic (the temperature contrast between warm and cold air masses) processes. It is important to note that cyclones can become extratropical and retain winds of hurricane or tropical storm force.

Krosa is veering northeast and will become fully extra-tropical during the day on Aug. 16.

Differences in end-of-life interventions between men, women with advanced dementia

New computational tool could change how we study pathogens

Secure quantum communications in the microwave range for the first…