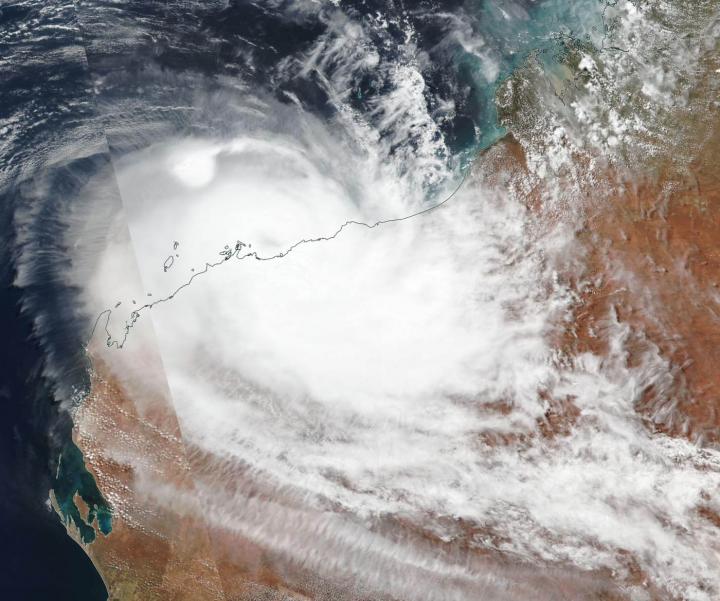 On March 25, Tropical Cyclone Veronica continued to move in southerly direction along the coast of Western Australia in the Southern Indian Ocean. NASA-NOAA’s Suomi NPP satellite provided a visible image of the storm.

Suomi NPP passed over Veronica on March 25 and the Visible Infrared Imaging Radiometer Suite (VIIRS) instrument provided a visible image of the storm. The VIIRS image showed what appeared to be a cloud-filled eye just off the coast, surrounded by powerful thunderstorms. The eastern and southern quadrant of Veronica was over land, while the rest of the storm was over the Southern Indian Ocean.

The Australian Bureau of Meteorology or ABM said that Tropical Cyclone Veronica, located near Karratha, was moving slowly west southwest and is likely to weaken below tropical cyclone intensity early Tuesday. Heavy rain over the central Pilbara will ease during Tuesday.

The Warning zone for March 25, 2019 extended from Roebourne to Mardie, including Karratha, and adjacent inland areas.

ABM expects Veronica to move in a westerly direction with its eye remaining just off the coast. It is forecast to pass just north of Dampier and over Barrier Island on its west-southwestward track. ABM noted that “widespread, very heavy rainfall conducive to major flooding is likely over the central Pilbara coast and adjacent inland areas, easing gradually during Tuesday. Heavy rainfall is expected to result in significant river rises, areas of flooding and hazardous road conditions. Some roads may become impassable and some communities may become isolated.”

The cyclone is a category one system currently located just off the central Pilbara coast, north of Karratha. Veronica is expected to move towards the west southwest and is likely to weaken below tropical cyclone intensity early Tuesday morning.