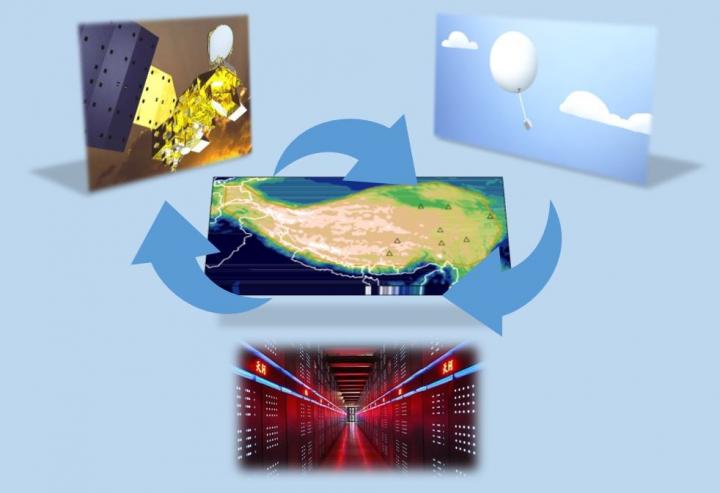 The Tibetan Plateau (TP), known as the “Asian water tower” because of its huge storage of glacier, has a profound impact on local and downstream ecosystems. However, it is a challenge to establish and maintain in situ observations there due to the complex terrain. Scientists have found substitutes, thanks to satellite technology.

“Both satellite and reanalysis data sets are reliable to be substitutes to reproduce the water vapor features over TP, but the time scale should be considered.” said Yin Zhao, a doctoral student from the Institute of Atmospheric Physics, Chinese Academy of Sciences. Zhao is the lead author of a recently published study in Climate Dynamics, along with her mentor Prof. Tianjun Zhou.

In sharp contrast with the importance of the giant water tower, sufficient in situ observations in the TP have been lacking due to the complex terrain. So satellite and reanalysis data sets become substitutes.

“In recent years, new versions of satellite data have been released and more reanalysis data sets have been updated. However, their quality needs to be evaluated, in particular, the reliability of existing satellite and reanalysis data products in capturing features of water vapor over TP”, said Zhao.

“Our analysis provides essential information about both the strengths and weakness of the current existing substitutes for the observational data, including the satellite products and reanalysis data. We recommend the application of the skill weighted ensemble mean of reanalysis data in future studies of water cycle over the TP, as it takes different time scale into account”, said Zhao.

Depression linked to nutrition in middle-aged and older Canadians

Researchers from the IDIBELL and the University of Barcelona describe…