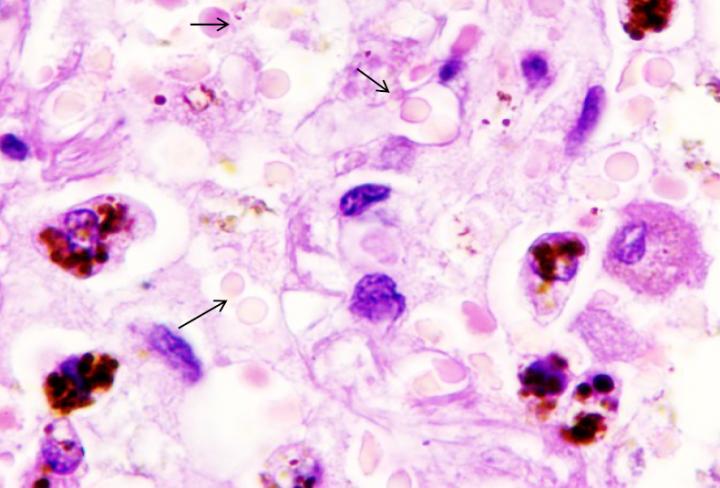 Specialists from the Department of Fundamental Medicine of Far Eastern Federal University (FEFU) with Russian and Japanese colleagues have probed into mechanisms of COVID-19 inside-the-body distribution linked to erythrocytes damaging. According to researchers, the virus might attack red marrow, thus being detrimental not only for erythrocytes in the bloodstream but also for the process of the formation of the new ones. A related article appears in Archiv EuroMedica.

Erythrocytes are the major target for the coronavirus (SARS-CoV-2). These red blood cells are responsible in the body for transport of the iron-rich protein hemoglobin carrying the oxygen.

Lost of erythrocytes might cause damage to the brain neurons, blood vessels, and internals, considering they get not enough oxygen. In the most severe cases, multiple organ failure can occur, and without his own red blood cells, the patient starts to suffocate. Artificial ventilation doesn’t help following there is no one who transports oxygen within the body. Effective therapy for such patients is to administer erythrocyte mass and vitamin B12. The mechanism of recovery of damaged red blood cells is still a mystery for scientists.

Early breakdown of red blood cells is the initial reaction of the body to the SARS COV-2 virus, which scales up gradually. The patient can learn about the pathology by feeling the taste of iron. That occurs because hemoglobin released from erythrocytes in the bloodstream is get in saliva.

According to scientists, everyone who has low hemoglobin is at risk. First of all, these are elderly people, patients with high blood pressure, people with obesity and diabetes mellitus, pregnant women, patients with primary and acquired immunodeficiency, with inhibition of hematopoietic function, HIV- and cancer patients.

“The virus enters the epithelium, where multiplies, then enters the bloodstream and attacks targets, which can be both the internal epithelium (gastrointestinal tract, lungs, genitourinary system) and erythrocytes,” explains Galina Reva, Professor of the Department of Fundamental Medicine, School of Biomedicine, FEFU. “Although most frequently we would see the pathology of the respiratory system, lungs, the virus needs epithelial cells only for reproduction. We believe the main target for the virus is the red marrow, where it damages the endothelium, the tissue, which normally regulates the migration of maturing cells into the blood. For this reason, strange things happen to the cells of the immune system, and megakaryocytes, very large cells of the bone marrow, had been found in the tissues of various organs. Normally, megakaryocytes become sources of platelets, which are responsible for blood coagulation, but with COVID-19 they clot blood in the vessels without any necessity.”

Professor Reva proceeds that lung fibrosis is just the most obvious manifestation of COVID-19, which appears not only as usual scar tissue formation in the defect’s area. Since the cause of fibrosis is megakaryocytes “thrown” into the bloodstream, similar processes might occur in the tissues of all parenchymal (dense) organs, which are lungs, liver, spleen, kidneys, pancreas, and thyroid.

“This is an aggressive process, though it can be slow and relatively benignant, with no clinical manifestations at the background of anemia, short wind, and increased heart rate. Simultaneously, the number of functionally active cells of organs’ tissue is shrinking, stromal elements that perform as a soft framework increase. Sometimes local changes take the form of a large fibrous tumor-like formation. The pathology is very dangerous since clinical signs can appear when these irreversible processes occupy a significant volume of the organ,” Professor Reva says.

In order to develop targeted treatment and measures to prevent possible complications after coronavirus 2, it is necessary to scrutinize the mechanism behind fibrosis of the lungs tissue, liver, kidneys, and other organs.

According to Galina Reva, coronavirus 2 also induces destruction of white pulp in the spleen, the very tissue producing cells responsible for infectious immunity like T-cells, and B-lymphocytes. For this exact reason, secondary infections comorbid to coronavirus 2 are dangerous to humans. The body simply has nothing to fight back. A patient can survive only through large doses of antibiotics, while the main thing is not to be late, because when the red cells begin to die from a shortage of oxygen, the person begins to suffocate and to save him is even more difficult.

At the next stage, scientists plan to check the intercellular connections and interactions in order to go down the chain of the virus’s way of action to the end. When did that, they hope to understand which cells in the body need to be stimulated in a severe course of the disease, and what it is simply useless to try to influence.

Conducting the investigation, scientists analyzed the results of their own studies of lung samples from 79 patients who died from COVID-19, which was PCR-confirmed. In the control group were 14 patients died accidentally.