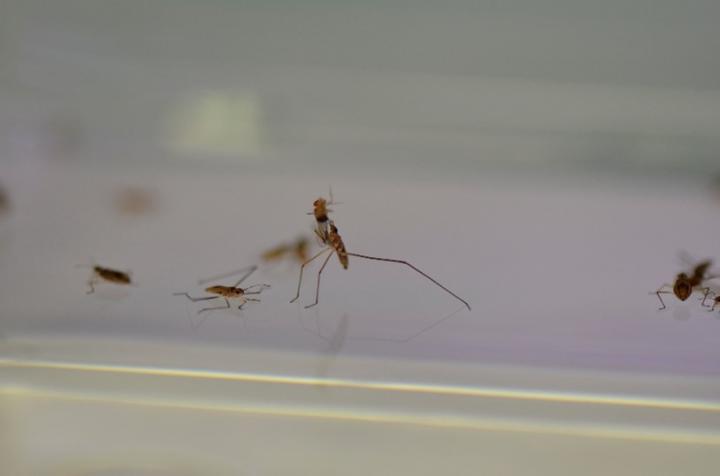 Some water strider males (Microvelia longipes) have enormous back legs relative to the rest of their body, which they use to guard egg-laying sites and to fight off rival males. William Toubiana, Abderrahman Khila and colleagues from the Universite? de Lyon in France report that the development of this exaggerated male sexual characteristic depends on the production of a ubiquitous growth factor, BMP11, also found in humans and mice. The study publishes 11th May, 2021 in the open-access journal PLOS Biology.

The water striders’ elongated third pair of legs are a classic example of hyperallometry, where the size of one body part grows disproportionally to the rest. The researchers used a combination of transcriptome sequencing, real-time PCR, and RNA interference (RNAi) to investigate its genetic underpinnings. They found striking differences in gene activity between the front, middle, and back legs, and between the equivalent legs of males and females. In RNAi “knock-down” experiments on 30 candidate genes, the loss of BMP11 function reduced the relative size of males’ back legs. But these BMP11 knock-down males were also smaller, on average, and in behavioral experiments they showed less aggression and avoided fights with other males.

A second candidate, the Hox gene Ultrabithorax, which normally helps to determine differences between body segments, was also more highly active in male striders’ back legs; however, knocking out its function reduced the relative size of the back legs without correlated reductions in average body size or behavior. This demonstrates that both genetically linked and unlinked traits can act as the basis for hyperallometry to evolve. The coupled effects of BMP11 on long-leggedness, body size, and aggression could be a behavioral adaptation, in which smaller-legged males chose to avoid conflicts they are unlikely to win; alternatively, BMP11 might have additional effects on nervous system development, the authors say.

Dr. Abderrahman Khila notes, “Discovering that a conserved gene, such as BMP11, was involved in the hyper-allometry of male third legs was quite interesting, but what was really exciting to us is to realize that males with reduced activity of BMP11 become so passive in.”

Dr, William Toubiana states, “That multiple traits, that combined increase fitness, could evolve in a correlated manner under the influence of a limited number of genes indicates that pleiotropy can promote the evolution of sexual dimorphism and exaggerated sexually selected traits.

One very important aspect of traits such as male leg size is the extreme variation in growth we observe between individuals of the same population. Among our future plans is to understand how this growth variation is mediated through the intricate interaction between genetics (DNA polymorphism), epigenetics, and nutrition. Microvelia longipes offers a unique opportunity to understand this interaction and, therefore, the complex genotype-phenotype map.”

In your coverage please use these URLs to provide access to the freely available articles in PLOS Biology: http://journals.plos.org/plosbiology/article?id=10.1371/journal.pbio.3001157

Funding: This work was supported by an ERC Co-G WaterWalking #616346 and Labex CEBA to AK, and a BMIC Lyon PhD fellowship to WT. The funders had no role in study design, data collection and analysis, decision to publish, or preparation of the manuscript.