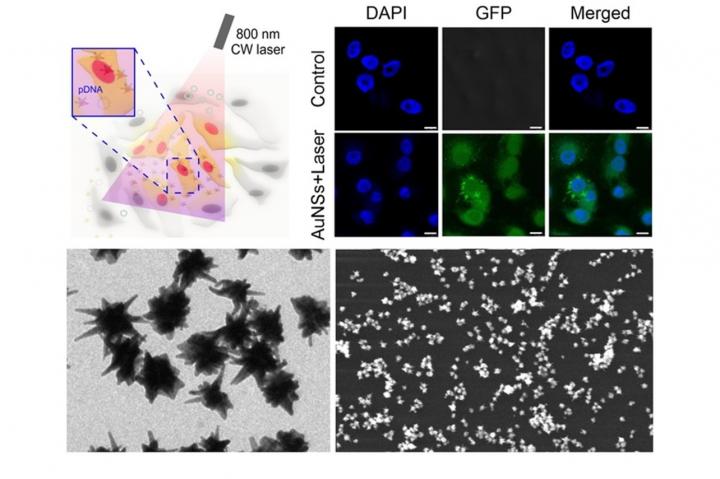 Researchers from Russian Academy of Sciences developed a new method for star-shaped nanoparticles synthesis based on laser irradiation. A wide range of customizable conditions provides an opportunity to create comfortable environment for various substances delivery to different types of cells. The results are published in Journal of Biophotonics. The research was supported by the Russian Science Foundation (RNF).

Intracellular delivery systems are of great importance for clinical and laboratory biomedical research. The latest techniques based on viral agents, chemical exposure and microinjections are aimed at achieving maximum efficiency while ensuring high cell viability. However, none of the currently known methods fully satisfies such requirements as compatibility with various cell types and delivered objects, minimal toxicity, maximum efficiency, relative cheapness and simplicity of execution.

The authors of the new study developed a new delivery method using gold nano-stars: star-shaped nanoparticles with sharp spikes. The researchers obtained them by reducing gold ions on spherical embryos of the same metal. After that the nano-stars were deposited in the form of single layers on the plastic surface and covered with cells. Laser irradiation caused electromagnetic waves to travel on the nanoparticles surface, thus transporting substances into the cell.

Scientists used pGFP (circular DNA with a gene encoding a fluorescent protein) to test the effectiveness of the developed method. They aimed at delivering this molecules into HeLa cells: human cervical cancer lines. This combination of model cells and the delivered object was chosen due to the frequent use of HeLa cells in clinical and biochemical studies, as well as easy testing since cells to which pGFP was successfully delivered are glowing. The efficiency of the developed method for model cells turned out to be more than 95%. Creating cell-friendly conditions led to almost absolute survival (about 92%), while after delivering in one of the most popular ways — using TurboFect chemical agent — about 75% of the cells survived.

The developed methodis simpler and cheaper than traditional commercial systems for the delivery of molecules into the cell. The advantages can also include the absence of direct contact of target substances and cells with nanoparticles, which reduces the likelihood of damage to cells and delivered substances/ Moreover, the spiked surface of nano-stars creates comfortable conditions for cell growth and adhesion (cell attachment to each other and to the surface). This makes the method applicable for delivering a wide range of molecules to different cells.

“We have developed and optimized a new platform for creating pores in cells based on monolayers of gold nano-stars using continuous laser radiation. Using this method, it is possible to produce highly efficient intracellular delivery of various substances in delicate conditions. We assume that methods using such nanoparticles can be an alternative to existing technologies of intracellular delivery of biomolecules for use in gene therapy, targeted drug application, obtaining modified cell cultures and other biomedical research,” explains Timofey Pylaev, one of the authors of the study from Russian Academy of Sciences.