Although you’ll probably never see them, you can spot them by the tell-tale mounds of sandy soil dotting a field: pocket gophers. Beneath your feet, the gophers continuously create and remold a labyrinth of winding tunnels hundreds of feet long. 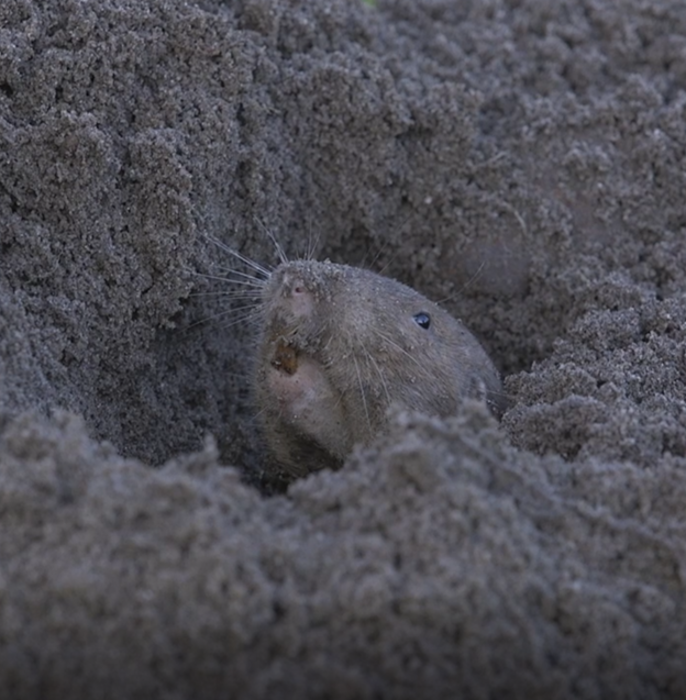 Although you’ll probably never see them, you can spot them by the tell-tale mounds of sandy soil dotting a field: pocket gophers. Beneath your feet, the gophers continuously create and remold a labyrinth of winding tunnels hundreds of feet long.

And, perhaps, tend the world’s most recently discovered farms. Root farms, that is.

A University of Florida biology professor and undergraduate student have discovered that southeastern pocket gophers tend to fields of subterranean roots they harvest for food. The discovery makes the rodents the only mammal — other than humans — known to farm for a living.

“They’re providing this perfect environment for roots to grow and fertilizing them with their waste,” said Veronica Selden, who recently graduated from Florida with a degree in zoology and is the first author of the new paper.

The gophers’ daily harvest of their root crops accounts for an average of 20% and as much as 60% of their energy needs, which helps make up for the intense energy cost of burrowing in dense soil. Selden and UF Professor Jack Putz published their findings July 11 in the journal Current Biology, where they argue that the root cropping behavior of the gophers constitutes a kind of rudimentary farming.

Enigmatic creatures, pocket gophers spend nearly their entire lives below ground in sprawling tunnels up to 500 feet long. Although often thought of as pests, they eat only roots and rarely damage crops. Nor do their strong tunnels undermine the ground.

“They live entirely alone in a tunnel system that’s 100 meters long. Dark and wet like a sewer pipe,” Putz said. “The roots grow in like stalactites and stalagmites. They cover the walls of their tunnel.”

Indeed, sewers helped inspire the project. Putz and Selden were puzzling over how the gophers got enough energy to dig when they recalled the perennial problem of roots growing into sewer pipes in homes.

“If roots grow into these man-made tunnels, perhaps they’ll grow into these gopher tunnels that have waste to fertilize them,” Selden said. Fortunately for gophers, though, the roots are their main food source.

The project relied on ingenuity, collaboration and — in an homage to the gophers — a lot of digging. Out at the property where Putz lives, he and Selden spent months trying to keep gophers out of their tunnels so they could measure the roots that grew back in. Using dams of wood or metal, the researchers attempted to block the gophers from their tunnels, but to no avail — the gophers merely went around.

Eventually, Putz and Selden turned to 50-gallon drums with the ends cut off. After even more digging, the researchers placed the open side of a drum into the soil to surround a patch of gopher tunnels while allowing plants on the surface to keep growing. The cylindrical shape provided 360 degrees of protection from gopher interference. (The scientists note in their paper that, while gophers were certainly inconvenienced by the project, none were harmed.)

Calculating the daily rate of root growth allowed Selden and Putz, with help from UF biology Professor Emeritus Brian McNab and others, to calculate how much of the gophers’ energy needs could be met by harvesting their crops.

They discovered that digging a tunnel costs far too much energy to be made up by the roots gophers eat while excavating. But, by harvesting the roots that grow into already-dug tunnels over time, the gophers can gain enough energy to keep digging tunnels in search of more food.

Although no other mammals are known to farm, other animals definitely do. Fungus-farming ants are perhaps the most famous. They sow and tend to fields of fungus and protect them from disease with antibiotics — much like how human farmers wield herbicides against weeds.

Unlike these ants, pocket gophers neither sow nor weed their crops. Indeed, while the gophers clearly harvest their crops of roots to survive, and take steps to defend and promote their crops, the new study reveals that the definition of “farming” is far from clear.

“Planting the crop, for some people, is what constitutes agriculture,” said Putz. Yet many other animals, and also different human cultures, use horticultural techniques to tend to crops they don’t plant themselves, Putz noted. “I think the whole issue is intellectually exciting because it’s not really settled.”

Selden hopes the debate calls attention to the overlooked animals.

“Pocket gophers are a lot more interesting than people give them credit for. They’re really important ecosystem engineers,” said Selden, who started her research career by pondering the habits of the rodents and has gone on to study the ecology of bats and bees. “They deserve more attention.”