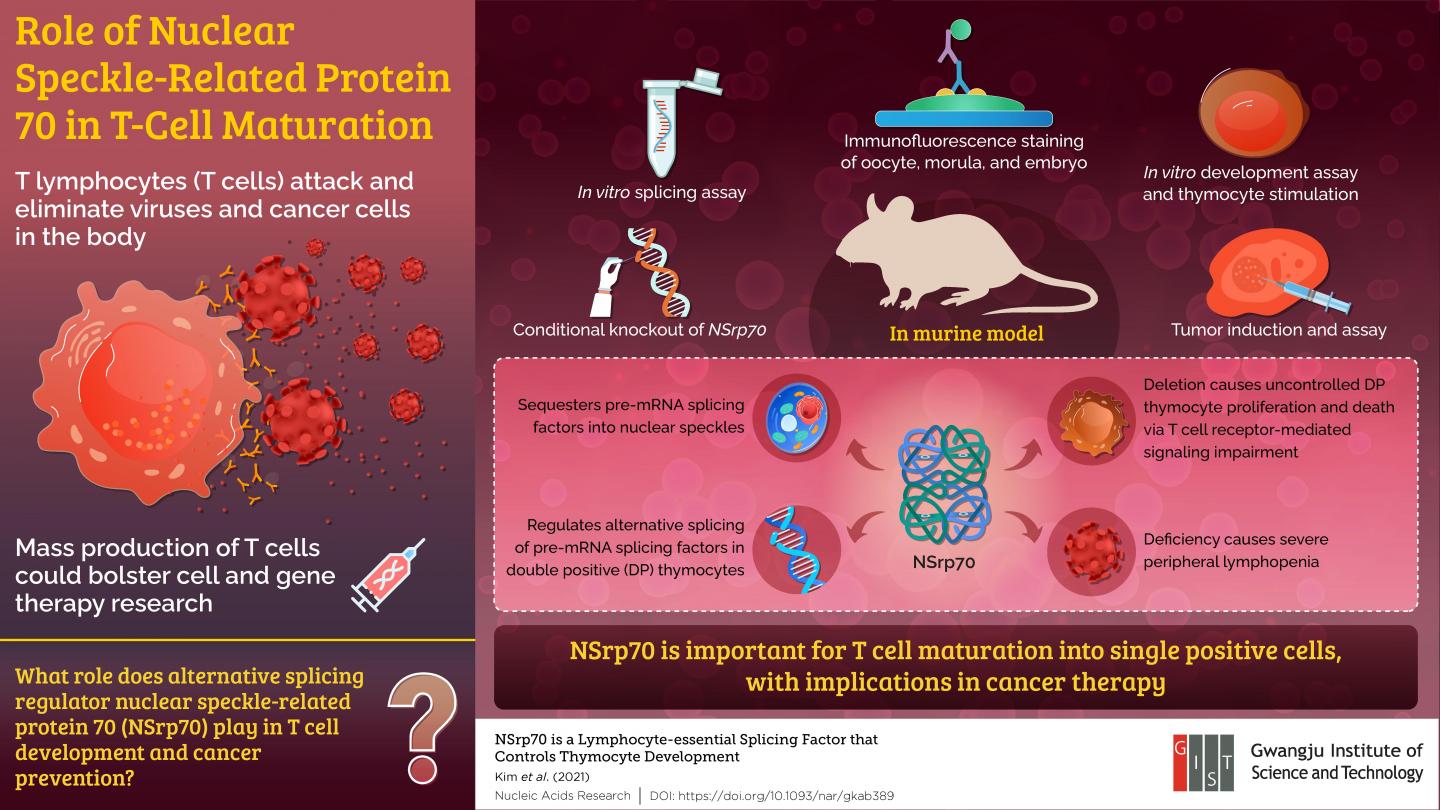 T lymphocytes, or T cells, are immune cells with diverse roles in building the body’s immunity. How does one particular cell type fight against a host of different pathogens? The key to this adaptability is in alternative splicing, wherein the cell produces multiple forms of proteins for identifying different types of invading viruses and microbes, as well as destroying cancer cells. So, it is not surprising that finding ways to improve the production of T cells with enhanced pathogen recognition capacity is an actively researched area of modern science.

In 2011, scientists from the Gwangju Institute of Science and Technology (GIST) in Korea discovered a protein called NSrp70, which is abundant in motile T cells. Located in specific regions inside the cell’s nucleus called nuclear speckles, NSrp70, which is short for nuclear speckle-related protein 70, is a gene regulator. Interestingly, nuclear speckles play an important role in protein production by housing mRNA splicing regulators that cut and join pre-messenger RNA fragments to produce the final messenger RNAs based on the proteins that are produced. With this knowledge, the scientists have been speculating about the possible role NSrp70 plays in the alternative splicing involved in T cell maturation and development.

Now, in a new study made available online on 25 May 2021 and published in Volume 49 Issue 10 of the journal Nucleic Acids Research, scientists from GIST led by Professor Chang-Duk Jun report their findings on the role of this protein and its encoding gene within a physiological environment. Explaining their motivation for the research, Prof. Jun says, “Ever since we discovered and presented NSrp70 to the academic world, we have been exploring its functions and mechanisms of action.”

In experiments with mice, the scientists were able to analyze the function of the protein using a technique known as conditional gene knockout, whereby they inactivated the gene coding for NSrp70 and produced cell samples that lacked the protein. By comparing these cell samples with regular cells, they determined the effects caused by the absence of the protein.

They report that NSrp70 is expressed very early in the cell cycle and plays an important role in T cell development. Specifically, the absence of the protein induced uncontrolled cell growth and death in double positive thymocytes that are T cell precursors. This impeded their progression to single positive thymocytes stymying the formation of mature T cells. NSrp70-deficient mice had a noticeably reduced lymphocyte count in peripheral tissues, and, thus, resulted in unchecked tumor growth, further attesting to the role NSrp70 plays in cancer development. Prof. Jun sums up the findings emphatically, “Our study revealed that NSrp70 is an important regulator of T cell proliferation. This finding can help us mass-produce specific T cells for cell therapy or use mass-produced T cells to inhibit the proliferation of cancer cells through gene therapy.”

The world welcomes such critical findings on nuclear speckles and constituent proteins with eager anticipation!

The Gwangju Institute of Science and Technology (GIST) is a research-oriented university situated in Gwangju, South Korea. As one of the most prestigious schools in South Korea, GIST was founded in 1993 and aims to create a strong research environment to spur advancements in science and technology and to promote collaboration between foreign and domestic research programs. With the motto, “A Proud Creator of Future Science and Technology,” GIST has consistently received one of the highest university rankings in Korea.

Chang-Duk Jun is a professor of Immune Synapse & Cell therapy Research Lab at the Gwangju Institute of Science and Technology. His team studies the immunological role of T cell microvilli, which are densely packed with T cell antigen receptors (TCRs) that recognize dendritic cell antigens.