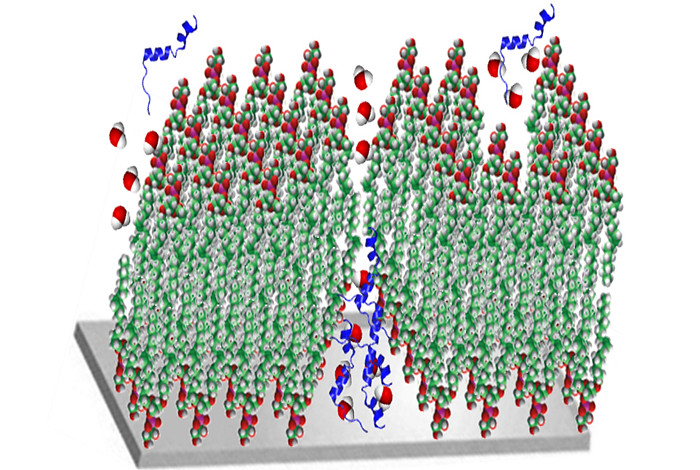 A collaboration between Los Alamos, Yale University, and Worcester Polytechnic Institute published research in the journal Langmuir that sheds light on pathological properties of amyloids identified in type II diabetes. Amyloids are unwanted aggregates of proteins in our bodies. Frequently they form fibers or plaques whose presence is correlated with the pathology for many diseases, including Alzheimer’s, Parkinson’s, and type II diabetes.

Significance of the work

Type II diabetes is a progressive disorder that has no known cause or cure. It affects approximately 28 million Americans and is the seventh leading cause of death in United States. The inability to maintain proper blood glucose levels defines type II diabetes. At the cellular level, loss of sensitivity to insulin, a hormone regulating the metabolism of carbohydrates, in the peripheral tissues results in increased insulin production by pancreatic β-cells. Secretion of insulin is also associated with increased production of islet amyloid polypeptide (IAPP), a short 37 amino acid peptide chain. The increase in amyloid secretion and aggregation into fibrils destroys the β-cells, subsequently leading to insulin deficiency. The molecular mechanism by which the cell death occurs is not yet understood, but evidence points towards interactions of IAPP oligomers with cellular membranes leading to breakdown of their integrity. Understanding the structural details of the lipid membrane and its interaction with IAPP could help identify the mechanisms of membrane disruption and enable the development of strategies to fight type II diabetes and other diseases in which amyloids play a role.

The investigators examined interactions of human and rat islet amyloid polypeptides with several formulations of model lipid membranes differing in ratio of neutral to charged molecules, density of their packing and the amount of defects in their structures. Human IAPP is toxic and prone to form amyloids, whereas rat IAPP has reduced toxicity and does not aggregate into fibrils under physiological conditions. However, both peptides are the same length, and their sequences differ by only a few amino acids.

The authors suggested that certain factors might contribute to the strong interaction of human hIAPP with lipid membranes. These include membrane electrical charge and macroscopic structural defects. Because the rat IAPP did not form fiber structures in solution nor perturb the structures of the model membranes, the team speculates that the observed effect of human IAPP on the model lipid membrane might be connected with its ability to form aggregates. The researchers concluded that the human IAAP disintegrates the lipid bilayer via folding and removing large patches of the membrane rather than by linking and removing single (or limited numbers) of lipid molecules. The insight into the mechanism of membrane disruption caused by human IAAP may help clinicians devise strategies to treat these types of diseases.

The research team used neutron surface scattering and fluorescence microscopy methods at Los Alamos Neutron Science Center’s Lujan Center to study interactions of IAPP with several formulations of supported lipid model membranes. Neutron scattering from nano-scale structures like lipid membranes provides several distinctive advantages over other methods. Penetrability of neutrons, their sensitivity to light elements, and good scattering contrast between biological objects and their environment provide high spatial resolution information on the structure of bio-membranes and their interactions with polypeptides.

The investigators showed that human IAPP had little or no effect on most of the lipid membrane formulations studied. However, the membrane structure and stability of negatively charged and unsaturated lipids in model membranes are extremely sensitive to interaction with human IAPP, and amyloid aggregates partly destroyed these membrane. Negatively charged lipids normally localize in the inner leaflet of the cell membrane. When the bilayer is damaged, the lipids can be present in the outer leaflet and interact with biological molecules like human IAPP. The human IAPP partially solubilized the bilayer under these conditions. In contrast, rodent IAPP had no perturbing effects on any of the membrane formulations. The results provide evidence of possible mechanisms that amyloid materials use to disrupt membranes.

Authors of the publication include Ann Junghans of Engineering Materials (MST-7), Erik B. Watkins of Materials Synthesis and Integrated Devices (MPA-11), Jaroslaw Majewski of the Center for Integrated Nanotechnologies (MPA-CINT), Andrew Miranker of Yale University, and Izabela Stroe of Worchester Polytechnic Institute.

This research used resources of the Manuel Lujan Jr. Neutron Scattering Center, which was a DOE Office of Science User Facility at that time the data used in this publication were collected. The research supports LANL’s Global Security mission area and Materials for the Future and Science of Signatures science pillars through the study of complex and living systems to understand the molecular basis of disease.