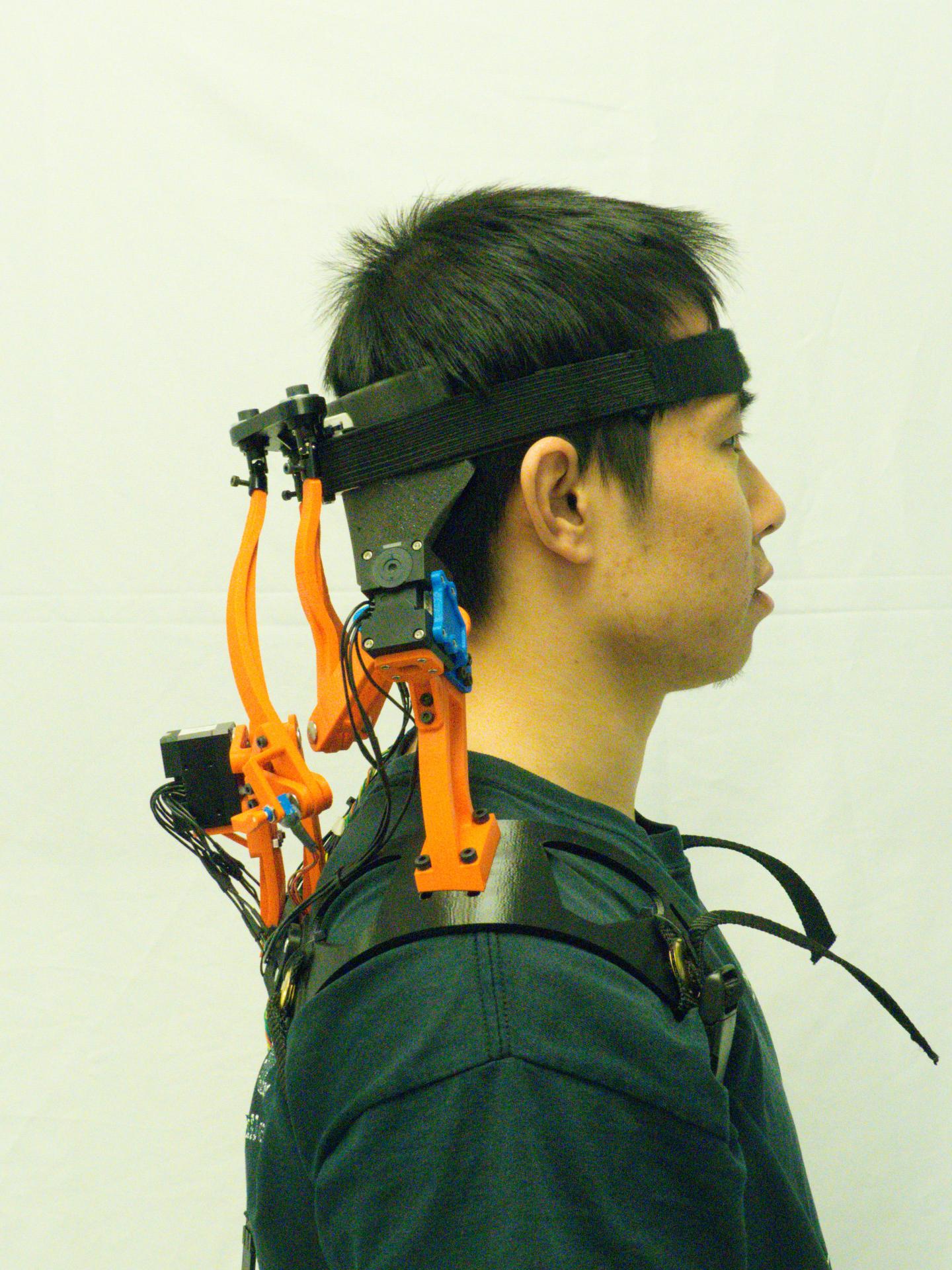 New York, NY–August 12, 2019–A novel neck brace, which supports the neck during its natural motion, was designed by Columbia engineers. This is the first device shown to dramatically assist patients suffering from Amyotrophic Lateral Sclerosis (ALS) in holding their heads and actively supporting them during range of motion. This advance would result in improved quality of life for patients, not only in improving eye contact during conversation, but also in facilitating the use of eyes as a joystick to control movements on a computer, much as scientist Stephen Hawkins famously did.

A team of engineers and neurologists led by Sunil Agrawal, professor of mechanical engineering and of rehabilitation and regenerative medicine, designed a comfortable and wearable robotic neck brace that incorporates both sensors and actuators to adjust the head posture, restoring roughly 70% of the active range of motion of the human head. Using simultaneous measurement of the motion with sensors on the neck brace and surface electromyography (EMG) of the neck muscles, it also becomes a new diagnostic tool for impaired motion of the head-neck. Their pilot study was published August 7 in the Annals of Clinical and Translational Neurology.

The brace also shows promise for clinical use beyond ALS, according to Agrawal, who directs the Robotics and Rehabilitation (ROAR) Laboratory. “The brace would also be useful to modulate rehabilitation for those who have suffered whiplash neck injuries from car accidents or have from poor neck control because of neurological diseases such as cerebral palsy,” he said.

“To the best of my knowledge, Professor Agrawal and his team have investigated, for the first time, the muscle mechanisms in the neck muscles of patients with ALS. Their neck brace is such an important step in helping patients with ALS, a devastating and rapidly progressive terminal disease,” said Hiroshi Mitsumoto, Wesley J. Howe Professor of neurology at the Eleanor and Lou Gehrig ALS Center at Columbia University Irving Medical Center who, along with Jinsy Andrews, assistant professor of neurology, co-led the study with Agrawal. “We have two medications that have been approved, but they only modestly slow down disease progression. Although we cannot cure the disease at this time, we can improve the patient’s quality of life by easing the difficult symptoms with the robotic neck brace.”

Commonly known as Lou Gehrig’s disease, ALS is a neurodegenerative disease characterized by progressive loss of muscle functions, leading to paralysis of the limbs and respiratory failure. Dropped head, due to declining neck muscle strength, is a defining feature of the disease. Over the course of their illness, which can range from several months to more than 10 years, patients completely lose mobility of the head, settling in to a chin-on-chest posture that impairs speech, breathing, and swallowing. Current static neck braces become increasingly uncomfortable and ineffective as the disease progresses.

To test this new robotic device, the team recruited 11 ALS patients along with 10 healthy, age-matched subjects. The participants in the study were asked to perform single-plane motions of the head-neck that included flexion-extension, lateral bending, and axial rotation. The experiments showed that patients with ALS, even in the very early stages of the disease, use a different strategy of head-neck coordination compared to age-matched healthy subjects. These features are well correlated with clinical ALS scores routinely used by clinicians. The measurements collected by the device can be used clinically to better assess head drop and the ALS disease progression.

“In the next phase of our research, we will characterize how active assistance from the neck brace will impact ALS subjects with severe head drop to perform activities of daily life,” said Agrawal, who is also a member of Columbia University’s Data Science Institute. “For example, they can use their eyes as a joystick to move the head-neck to look at loved ones or objects around them.”

The study is titled “A Robotic Brace to Characterize Head-Neck Motion and Muscle EMG in Subjects with ALS.”

The authors declare they have no competing financial interests.

Paying attention to complaints can protect nurses from violence

Scienmag Feb 20, 2020
Credit: ©The University of British Columbia Complaints from patients and their family members could signal…

An 18-carat gold nugget made of plastic