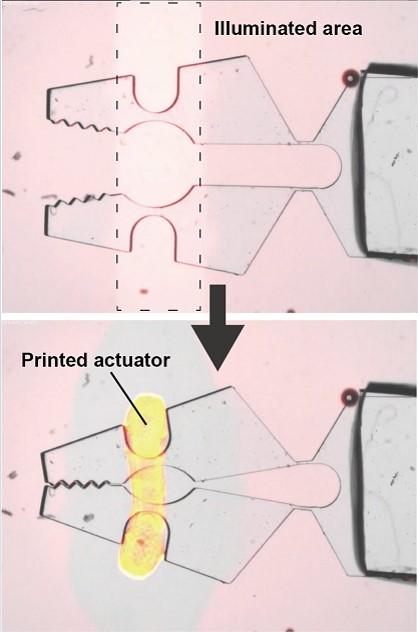 Ishikawa, Japan – Inside our cells, and those of the most well-known lifeforms, exist a variety of complex compounds known as “molecular motors.” These biological machines are essential for various types of movement in living systems, from the microscopic rearrangement or transport of proteins within a single cell to the macroscopic contraction of muscle tissues. At the crossroads between robotics and nanotechnology, a goal that is highly sought after is finding ways to leverage the action of these tiny molecular motors to perform more sizeable tasks in a controllable manner. However, achieving this goal will certainly be challenging. “So far, even though researchers have found ways to scale up the collective action of molecular motor networks to show macroscopic contraction, it is still difficult to integrate such networks efficiently into actual machines and generate forces large enough to actuate macroscale components,” explains Associate Professor Yuichi Hiratsuka from the Japan Advanced Institute of Science and Technology, Japan.

Fortunately, Dr. Hiratsuka, in collaboration with Associate Professor Takahiro Nitta from Gifu University and Professor Keisuke Morishima from Osaka University, both in Japan, have recently made remarkable progress in the quest to bridge the micro with the macro. In their latest study published in Nature Materials, this research team reported the design of a novel type of actuator driven by two genetically modified biomolecular motors. One of the most attractive aspects of their biologically inspired approach is that the actuator self-assembles from the basic proteins by simple light irradiation. In a matter of seconds after light hits a given area, the surrounding motor proteins fuse with rail-like proteins called microtubules and arrange themselves into a hierarchical macroscopic structure that resembles muscle fibers.

Upon formation around the target (illuminated) zone, this “artificial muscle” immediately contracts, and the collective force of the individual motor proteins is amplified from a molecular scale to a millimeter one. As the scientists showed experimentally, their approach could be ideal for small-scale robotics applications, such as actuating microscopic grippers to handle biological samples (Figure 1). Other millimeter-scale applications also demonstrated include joining separate components together, such as miniature cogwheels, and powering minimalistic robotic arms to make an insect-like crawling microrobot.

What’s also very remarkable about this technique is that it is compatible with existing 3D printing techniques that use light, such as stereolithography. In other words, microrobots with built-in artificial muscles may be 3D printable, enabling their mass production and hence increasing their applicability to solve various problems! “In the future, our printable actuator could become the much-needed ‘actuator ink’ for the seamless 3D printing of entire robots. We believe that such a biomolecule-based ink can push forward the frontier of robotics by enabling the printing of complex bone and muscle components required for robots to further resemble living creatures,” highlights Dr. Hiratsuka.

One potential improvement to the present technique would be finding ways to efficiently decontract the artificial muscles (reversibility). Alternatively, the present strategy could also be changed so as to produce spontaneous oscillatory behavior instead of contraction, as is observed in the mobile cilia of microbes or in insect flight muscles.

In any case, this study effectively shows how mimicking the strategies that nature has come up with is often times a recipe for success, as many scientists in the field of robotics have already figured out!

Founded in 1990 in Ishikawa prefecture, the Japan Advanced Institute of Science and Technology (JAIST) was the first independent national graduate school in Japan. Now, after 30 years of steady progress, JAIST has become one of Japan’s top-ranking universities. JAIST counts with multiple satellite campuses and strives to foster capable leaders with a state-of-the-art education system where diversity is key; about 40% of its alumni are international students. The university has a unique style of graduate education based on a carefully designed coursework-oriented curriculum to ensure that its students have a solid foundation on which to carry out cutting-edge research. JAIST also works closely both with local and overseas communities by promoting industry-academia collaborative research.

Yuichi Hiratsuka obtained a PhD in physical sciences from Hokkaido University, Japan. In 2006, he joined the School of Materials Science at JAIST. He currently works there as an Associate Professor and specializes in applied biofunctional and bioprocess engineering, biophysics, nanobioscience, and nano/micro-systems. He has authored approximately 20 papers.

This study was supported by the New Energy and Industrial Technology Development Organization (NEDO, No. 16100859-0), MEXT (KAKENHI ‘Molecular Robotics’ JP24104004), and the Japan Society for the Promotion of Science (JSPS, KAKENHI JP18H01407).