Circumstances surrounding suicide among incarcerated youth and those in the community calls for further intervention, reports a new study in the Journal of the American Academy of Child and Adolescent Psychiatry 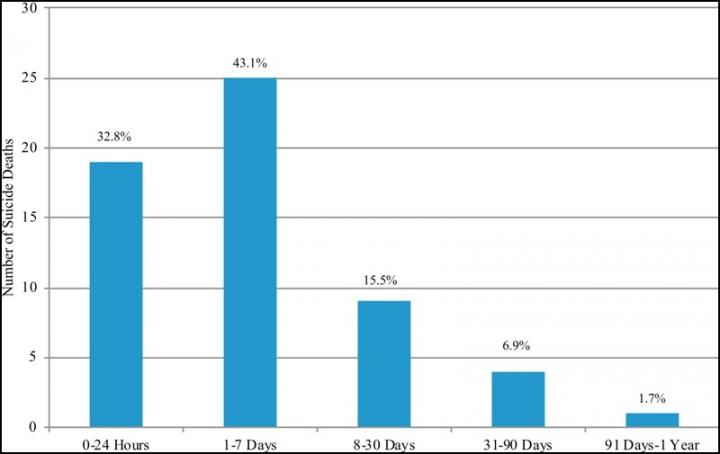 Washington, DC, May 2, 2019 – While little is known about the factors associated with suicide for incarcerated youth, it is the second leading cause of death among youth 10- to 24-years-old in the United States. A new study in the Journal of the American Academy of Child and Adolescent Psychiatry (JAACAP), published by Elsevier, shows there is little disagreement that youth in custody are at an increased risk for suicidal behavior. Suicide rates were reported to be 2-to-3 times higher for youth in custody than those in the general population; calls for improving current intervention methods in correctional facilities and identifying the signs earlier are highlighted in the study.

Based on a US Department of Justice survey conducted from 2000 to 2014, researchers from Nationwide Children’s Hospital, Columbus, OH, USA, looked at circumstances preceding suicide to understand better why this disparity in suicide rate exists, and identified that key risk factors for suicide – history of suicide attempts; history of mental health conditions; and alcohol/drug use – were not significantly different between the two groups.

“Youth who were incarcerated and died by suicide were no more likely to have mental health conditions than those who died by suicide in the community,” said Donna Ruch, PhD, post-doctoral scientist at the Center for Suicide Prevention and Research in The Research Institute at Nationwide Children’s. “That surprised us and led us to question whether there may be something about the environment that contributed to the increase in suicides.”

The study used a nationally representative sample to examine characteristics and circumstances leading to suicide deaths among incarcerated youth. By mining the National Violent Death Reporting System data from 2003 to 2012, researchers compared data from youth aged 10-to-24 who died by suicide during incarceration to those who died by suicide in the general population.

A key difference between the groups is that incarcerated youth were less likely to disclose suicide intent (19.2 compared to 30.5 percent) or leave a suicide note (23.5 compared to 31.0 percent).

“The immediate shock of confinement and disruption to a youth’s regular life can be traumatic and increase the risk for suicidal behavior,” explained Dr. Ruch. “This might be especially true for incarcerated youth with existing risk factors.”

According to the study, the prominence of strangulation or suffocation as a means of suicide for incarcerated youth highlights the potential impact of greater attention to restricting access to ligatures and ligature points in correctional facilities.

Practical recommendations from the study include timely and ongoing suicide risk assessments and implementation of targeted suicide prevention programs for incarcerated youth. According to the study, 93 percent of juvenile correctional facilities screen for suicide risk at intake only, with re-screening performed only when “deemed necessary.” Adequately addressing the mental health needs of juveniles detained in adult facilities is even more challenging, Dr. Ruch highlighted. The authors note that their study was not designed to address this issue.

Responsible reporting on suicide and the inclusion of stories of hope and resilience can prevent more suicides. You can find more information on safe messaging about suicide here.

The article is “Characteristics and Precipitating Circumstances of Suicide Among Incarcerated Youth,” by Donna A. Ruch, PhD, Arielle H. Sheftall, PhD, Paige Schlagbaum, BS, Cynthia A. Fontanella, PhD, John V. Campo, MD, Jeffrey A. Bridge, PhD (https://doi.org/10.1016/j.jaac.2018.07.911). It will appear in the Journal of the American Academy of Child and Adolescent Psychiatry, volume 58, issue 5 (May 2019), published by Elsevier.

The Journal’s purpose is to advance research, clinical practice, and theory in child and adolescent psychiatry. It is interested in manuscripts from diverse viewpoints, including genetic, epidemiological, neurobiological, cognitive, behavioral, psychodynamic, social, cultural, and economic. Studies of diagnostic reliability and validity, psychotherapeutic and psychopharmacological treatment efficacy, and mental health services effectiveness are encouraged. The Journal also seeks to promote the well-being of children and families by publishing scholarly papers on such subjects as health policy, legislation, advocacy, culture and society, and service provision as they pertain to the mental health of children and families. http://www.jaacap.org

Elsevier is a global information analytics business that helps scientists and clinicians to find new answers, reshape human knowledge, and tackle the most urgent human crises. For 140 years, we have partnered with the research world to curate and verify scientific knowledge. Today, we’re committed to bringing that rigor to a new generation of platforms. Elsevier provides digital solutions and tools in the areas of strategic research management, R&D performance, clinical decision support, and professional education; including ScienceDirect, Scopus, SciVal, ClinicalKey and Sherpath. Elsevier publishes over 2,500 digitized journals, including The Lancet and Cell, 39,000 e-book titles and many iconic reference works, including Gray’s Anatomy. Elsevier is part of RELX Group, a global provider of information and analytics for professionals and business customers across industries. http://www.elsevier.com