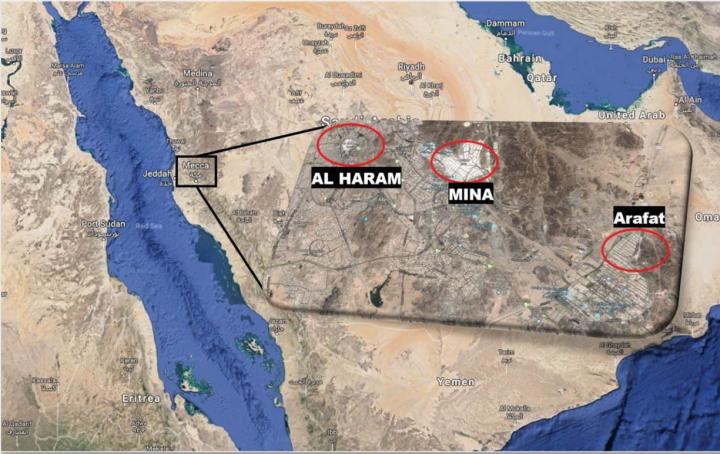 WASHINGTON – Over two million Muslim travelers just finished the annual religious pilgrimage to Mecca, Saudi Arabia, traveling during some of the country’s hottest weather. New research finds pilgrims in future summers may have to endure heat and humidity extreme enough to endanger their health. The results can help inform policies that would make the trip safer for the several million people who make the pilgrimage each year, according to the study’s authors.

Hajj, or Muslim Pilgrimage, is one of the five pillars of the Muslim faith. It is an annual pilgrimage to Mecca, Saudi Arabia, that involves living in the hot weather conditions of Saudi Arabia. Muslims are expected to make the pilgrimage at least once in their lifetimes. Islam follows a lunar calendar, so the dates for Hajj change every year. But for five to seven years at a time, the trip falls over summer.

A new study projecting future summer temperatures in the region around Mecca finds that as soon as 2020, summer days in Saudi Arabia could surpass the United States National Weather Service’s extreme danger heat-stress threshold, at a wet-bulb temperature of 29.1 degrees C (84.3 degrees Fahrenheit).

Wet-bulb temperature is a measurement combining temperature with the amount of moisture in the air. At the extreme danger threshold defined by the National Weather Service, sweat no longer evaporates efficiently, so the human body cannot cool itself and overheats. Exposure to these conditions for long periods of time, such as during Hajj, could cause heat stroke and possibly death.

“When the Hajj happens in summer, you can imagine with climate change and increasing heat-stress levels conditions could be unfavorable for outdoor activity,” said Elfatih Eltahir, a civil and environmental engineer at Massachusetts Institute of Technology and co-author of the new study in the AGU journal Geophysical Research Letters.

“Hajj may be the largest religious tourism event,” Eltahir said. “We are trying to bring in the perspective of what climate change could do to such large-scale outdoor activity.”

Middle Eastern temperatures are rising because of climate change and scientists project them to keep rising in the coming decades. In the new study, Eltahir and his colleagues wanted to know how soon and how frequently temperatures during summer Hajj would pass the extreme danger threshold. The researchers examined historical climate models and used past data to create a projection for the future.

The study authors stress that their projections are meant not to cause anxiety among pilgrims but instead to help them adapt, and to help authorities plan for safe Hajj.

“These results are not meant to spread any fears, but they are meant to inform policies about climate change, in relation to both mitigation and adaptation” Eltahir said. “There are ways people could adapt, including structural changes by providing larger facilities to help people perform Hajj as well as nonstructural changes by controlling the number of people who go.”

“They’ve provided a very compelling example of an iconic way that 2 to 3 million people per year that can be really vulnerable to what to me is the biggest underrated climate hazard – this combination of high temp and high humidity,” said Radley Horton, a climate scientist at Columbia University Lamont Doherty Earth Observatory who was not involved with the study. “I believe as the century progresses if we don’t reduce our greenhouse gases [this] could become every much as an existential threat as sea level rising and coastal flooding.”

This paper is freely available for 30 days. Journalists and public information officers (PIOs) can download a PDF copy of the article by clicking on this link: https://agupubs.onlinelibrary.wiley.com/doi/full/10.1029/2019GL083235

Journalists and PIOs may also request a copy of the final paper by emailing Nanci Bompey at [email protected] Please provide your name, the name of your publication, and your phone number.

Neither this paper nor this press release is under embargo.