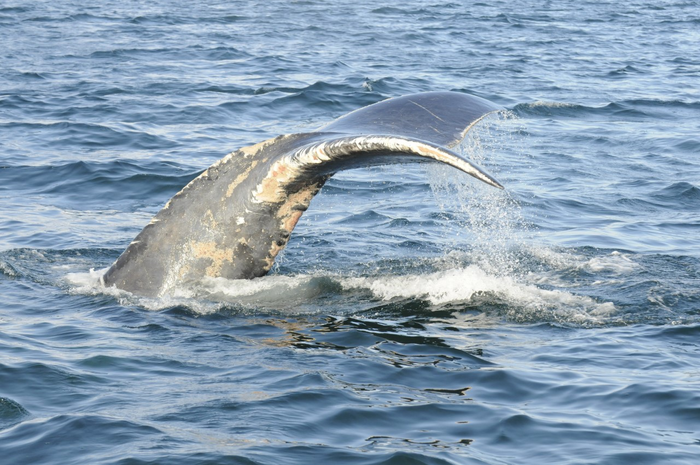 North Atlantic right whales are a critically endangered species whose population has shrunk in recent decades. Scientists estimate fewer than 350 of the iconic whales are still alive in the wild today.

To examine the role fishing gear entanglements have played in the species’ decline, the researchers tracked the outcomes of 1,196 entanglements involving 573 right whales between 1980 and 2011 and categorized each run-in based on the severity of the injury incurred

Females that did survive had much lower birth rates and longer intervals between calving, a worrisome trend for the long-term survival of the species.

“This species is heading quickly towards extinction because of human activities,” said lead author Amy Knowlton, a senior scientist at the New England Aquarium. “This study sheds further light on the role of fishing gear entanglements in their decline. Even if a right whale survives an entanglement, the injuries it sustains endure and can impact its health.”

“Our findings underscore the urgent need for changes to the fixed gear fishing industry,” said Robert Schick, a research scientist at Duke’s Nicholas School of the Environment, who was a co-lead author of the study.

Knowlton, Schick and their colleagues published their peer-reviewed, open-access study June 14 in the journal Conservation Science and Policy.

Entanglements of North Atlantic right whales typically occur in fixed fishing gear, including lobster and crab pots and gillnets, after an animal collides with ropes in the water. The resulting injuries can range from superficial wounds with no gear still attached to the whale’s body, to cases where the fishing line wraps tightly around the body, possibly many times, causing deep wounds, impaired feeding, and much higher energy expenditure for the whale as it drags the heavy gear through the open ocean.

While most gear interactions result only in scars, the new study shows that the rate of serious entanglements — those with attached gear or severe injuries — is increasing and the sub-lethal effects of these entanglements are more pronounced than previously reported.

“What really surprised us was the reduction in survival regardless of whether gear remains attached or not, which was especially apparent in females,” said Schick.

Although right whales have shown an ability to adapt to many threats, including how climate change is making the prey species they depend on for food less predictable and harder to find, the new findings suggest they are having a tougher time adapting to changes in fishing activities, including the expansion of fishing efforts and the strengthening of ropes. These findings amplify other recent research that suggest human activities, especially fishing gear entanglements, are the primary cause of death and serious injury to North Atlantic right whales and are the primary contributor to the current population decline.

“If we are going to save right whales from imminent extinction, dramatic changes to how fixed fishing gear activities are presently conducted are required,” Knowlton said. “We believe these changes will require support from both the U.S. and Canadian governments to help the fishing industry transition to gear that will allow the industry to operate in a manner that is safer for whales and other marine species,” she said.

Knowlton and Schick conducted the new study with James Clark of Duke’s Nicholas School, and Philip Hamilton, Scott Kraus, Heather Pettis, and Rosalind Rolland of the New England Aquarium. Schick also holds a research appointment at the University of St. Andrews in Scotland.