Revisiting the hub of protein synthesis 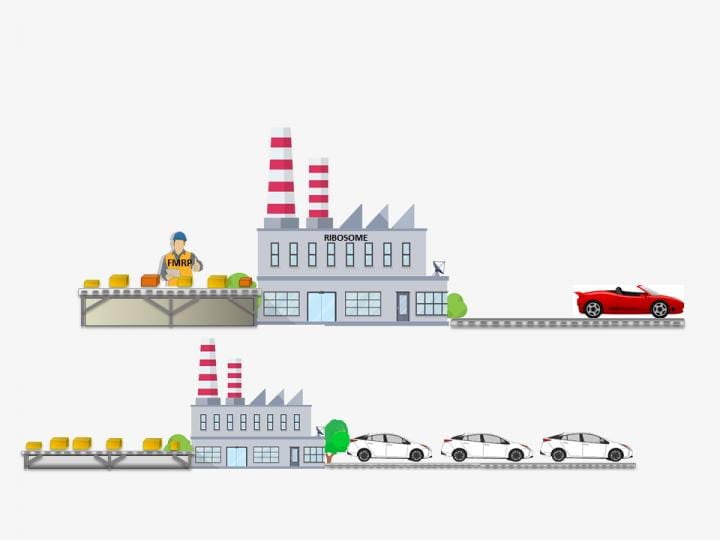 Proteins are not only necessary for making strong muscles, they are also required for building a smart brain too! When we learn new things, several proteins are produced in the neurons of our brain which help to establish new connections between the neurons. A defect in protein synthesis leads to defects in learning, memory and also brain development..

The human body has around 20,000 different proteins that need to be made, destroyed and remade at different rates in different cell types at various times. Proteins are synthesized in all living cells by complex molecular machines called ribosomes. The 1974 Nobel prize in physiology and medicine was awarded to A Claude, CD Duve and GE Palade for the discovery of the ribosome. Following this, after three decades of intense and careful research, V Ramakrishnan, TA Steitz and AE Yonath won the 2009 Nobel prize in chemistry for determining the detailed structure of these interesting machines that make proteins. For a very long time it was believed that every ribosome is identical to another ribosome; churning out specific proteins based on the genetic information that they received. However, recent studies have disproved this idea by indicating that all ribosomes are not identical in composition and there are some ribosomes which are specialized. These specialized ribosomes determine which protein they make and at what rate. A study led by Dr. Ravi Muddashetty at InStem, Bangalore identified distinct markers to distinguish ribosomes that are specialized for producing specific sets of proteins and hinted that this specialization could be important for the development of the nervous system. As mentioned earlier, the ribosome is a complex made up of a large assemblage of proteins and RNAs, carrying all the required tools to build proteins based on the genetic message, making the ribosome a specialized operational hub (similar to an assembly line in a car factory). Just as factories are designed to manufacture a variety of products from the same starting material, ribosomes can generate a variety of proteins depending on their own composition of proteins and nucleic acids, making each ribosome distinct in its design although their function remains the same. What adds to this phenomenon of specialization is the fact that both the protein and RNA components are prone to certain modifications during the course of a ribosome’s biogenesis and scientists claim that this addition of modifications could be another level of complexity in protein synthesis regulation, ‘This means certain proteins could be made by specific set of ribosomes in specific compartments of a cell ‘adds Michelle D’Souza, first author of the paper that has been published in iScience this week.

During the course of their research, the team also discovered that these modifications of ribosomal RNA (called 2’O-methylations) are altered in the absence of a protein called Fragile X Mental Retardation Protein (FMRP). This protein is mostly found in the brain and is essential for normal cognitive development. Mutations in the FMRP coding gene, FMR1, leads to Fragile-X Syndrome (FXS), which results in developmental delays of the nervous system and intellectual disability. A general function of this protein involves binding messenger RNA (mRNA) and regulating their translation into proteins especially at the connections (synapse) of neurons. However, in cases, where FMRP is absent, there is a dysregulation in protein production, a phenotype that is observed in Fragile X Syndrome. FMRP could also regulate protein synthesis beyond the synapse and its role of FMRP in normal and disease states needs to be explored.

This work has established a novel role for FMRP in modifying ribosomal RNA and thus regulating the recruitment of specialized ribosomes to specific mRNAs. In future, the team aims to understand the mechanism by which FMRP’s interaction with ribosomes regulates protein synthesis and contributes to manifestation of the symptoms of Fragile-X syndrome and other cognitive deficits.

The work was supported by funding from NeuroStem (Indo-Danish grant) and Department of Biotechnology (Government of India) and carried out at the Centre for Brain Development and Repair at Institute for Stem Cell Biology and Regenerative Medicine (InStem), Bangalore.

The paper titled ‘FMRP interacts with C/D box snoRNA in the nucleus and regulates ribosomal RNA methylation’ can be accessed here https://www.cell.com/action/showPdf?pii=S2589-0042(18)30197-4

Article by Sumita Chakraborty, a postdoctoral fellow, with inputs from Michelle D’souza at the Centre for Brain Development and Repair at Institute for Stem Cell Biology and Regenerative Medicine (InStem), Bangalore.