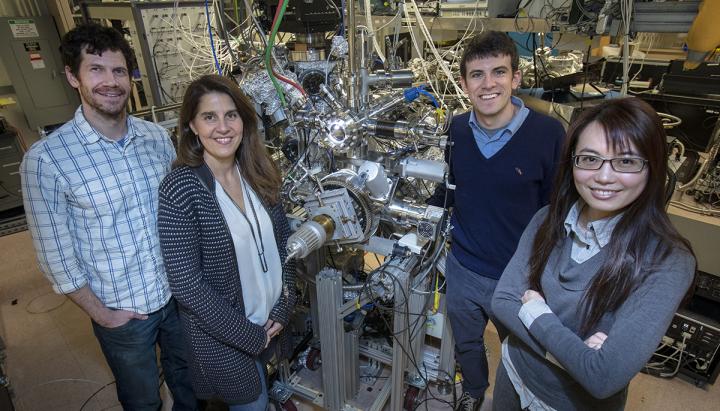 Now, researchers at the U.S. Department of Energy’s Lawrence Berkeley National Laboratory (Berkeley Lab) have unveiled a clue into the cuprates’ unusual properties – and the answer lies within an unexpected source: the electron spin. Their paper describing the research behind this discovery was published on Dec. 13 in the journal Science.

Adding electron spin to the equation

Every electron is like a tiny magnet that points in a certain direction. And electrons within most superconductor materials seem to follow their own inner compass. Rather than pointing in the same direction, their electron spins haphazardly point every which way – some up, some down, others left or right.

When scientists are developing new kinds of materials, they usually look at the materials’ electron spin, or the direction in which the electrons are pointing. But when it comes to making superconductors, condensed matter physicists haven’t traditionally focused on spin, because the conventionally held view was that all of the properties that make these materials unique were shaped only by the way in which two electrons interact with each other through what’s known as “electron correlation.”

But when a research team led by Alessandra Lanzara, a faculty scientist in Berkeley Lab’s Materials Sciences Division and a Charles Kittel Professor of Physics at UC Berkeley, used a unique detector to measure samples of an exotic cuprate superconductor, Bi-2212 (bismuth strontium calcium copper oxide), with a powerful technique called SARPES (spin- and angle-resolved photoemission spectroscopy), they uncovered something that defied everything they had ever known about superconductors: a distinct pattern of electron spins within the material.

“In other words, we discovered that there was a well-defined direction in which each electron was pointing given its momentum, a property also known as spin-momentum locking,” said Lanzara. “Finding it in high-temperature superconductors was a big surprise.”

A new map for high-temperature superconductors

And within this special class of high-temperature superconductor materials, cuprates are some of the best performers, leading some researchers to believe that they have potential use as a new material for building super-efficient electrical wires that can carry power without any loss of electron momentum, said co-lead author Kenneth Gotlieb, who was a Ph.D. student in Lanzara’s lab at the time of the discovery. Understanding what makes some exotic cuprate superconductors such as Bi-2212 work at temperatures as high as 133 Kelvin (about -220 degrees Fahrenheit) could make it easier to realize a practical device.

Among the very exotic materials that condensed matter physicists study, there are two kinds of electron interactions that give rise to novel properties for new materials, including superconductors, said Gotlieb. Scientists who have been studying cuprate superconductors have focused on just one of those interactions: electron correlation.

The other kind of electron interaction found in exotic materials is “spin-orbit coupling” – the way in which the electron’s magnetic moment interacts with atoms in the material.

Spin-orbit coupling was often neglected in the studies of cuprate superconductors, because many assumed that this kind of electron interaction would be weak when compared to electron correlation, said co-lead author Chiu-Yun Lin, a researcher in the Lab’s Materials Sciences Division and a Ph.D. student in the Department of Physics at UC Berkeley. So when they found the unusual spin pattern, Lin said that although they were pleasantly surprised by this initial finding, they still weren’t sure whether it was a “true” intrinsic property of the Bi-2212 material, or an external effect caused by the way the laser light interacted with the material in the experiment.

Shining a light on electron spin with SARPES

Over the course of nearly three years, Gotlieb and Lin used the SARPES detector to thoroughly map out the spin pattern at Lanzara’s lab. When they needed higher photon energies to excite a wider range of electrons within a sample, the researchers moved the detector next door to Berkeley Lab’s synchrotron, the Advanced Light Source (ALS), a U.S. DOE Office of Science User Facility that specializes in lower energy, “soft” X-ray light for studying the properties of materials.

The SARPES detector was developed by Lanzara, along with co-authors Zahid Hussain, the former ALS Division Deputy, and Chris Jozwiak, an ALS staff scientist. The detector allowed the scientists to probe key electronic properties of the electrons such as valence band structure.

After tens of experiments at the ALS, where the team of researchers connected the SARPES detector to Beamline 10.0.1 so they could access this powerful light to explore the spin of the electrons moving with much higher momentum through the superconductor than those they could access in the lab, they found that Bi-2212’s distinct spin pattern – called “nonzero spin – was a true result, inspiring them to ask even more questions. “There remains many unsolved questions in the field of high-temperature superconductivity,” said Lin. “Our work provides new knowledge to better understand the cuprate superconductors, which can be a building block to resolve these questions.”

Lanzara added that their discovery couldn’t have happened without the collaborative “team science” of Berkeley Lab, a DOE national lab with historic ties to nearby UC Berkeley. “This work is a typical example of where science can go when people with expertise across the scientific disciplines come together, and how new instrumentation can push the boundaries of science,” she said.

The work was supported by the DOE Office of Science.

DOE’s Office of Science is the single largest supporter of basic research in the physical sciences in the United States, and is working to address some of the most pressing challenges of our time. For more information, please visit the Office of Science website at http://science.energy.gov.

Eating your veggies, even in space