Rethinking the science of plastic recycling 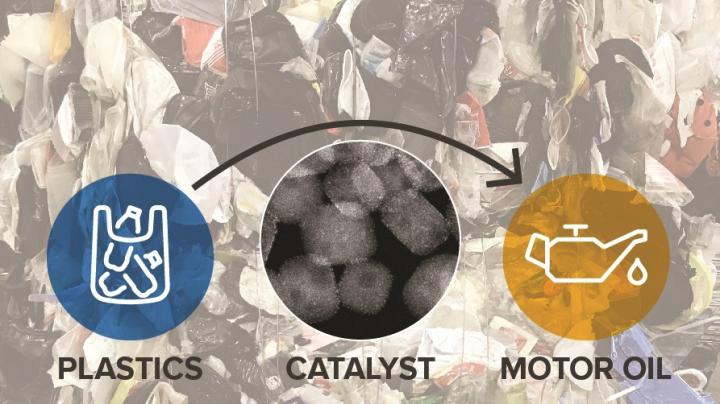 We depend on plastics in our daily life — not just for conveniences like plastic bags and bottles, but also for essential applications like food packaging and medical devices where plastic is simply the best material available. To meet the ever-rising demand, manufacturers now produce nearly 400 million tons of plastic every year worldwide, and that number could jump fourfold by 2050. Yet, today, we throw away over three-quarters of our plastics after one-time use. Left untreated in landfills or the environment, this waste can take thousands of years to decompose. But what if we could convert these plastics into high-quality products like lubricant oils, detergents, or cosmetics?

“We asked ourselves the question, ‘Plastic, plastic everywhere: What can we do about it in terms of chemical recycling?'” said Max Delferro, group leader of the Catalysis Science Program in the Chemical Sciences and Engineering division at the U.S. Department of Energy’s (DOE’s) Argonne National Laboratory. “So, we assembled a talented team with DOE’s Ames Laboratory and researchers from top universities to provide a solution.” The partners from academia included Northwestern University, Cornell University, University of South Carolina and University of California, Santa Barbara.

“We asked ourselves the question, ‘Plastic, plastic everywhere: What can we do about it in terms of chemical recycling?'” — Max Delferro, group leader of the Catalysis Science Program in the Chemical Sciences and Engineering division

“There are certainly things we can do as a society to reduce consumption of plastics in some cases, but there will always be instances where plastics are difficult to replace, so we really want to see what we can do to find value in the waste,” said Aaron Sadow, scientist and team leader of the project at Ames Laboratory.

While some waste plastic does get recycled, the resulting product is generally of lower quality and value than the original polymer. In a recently published study in the journal ACS Central Science, the multi-institutional team reported a catalytic method for selectively converting discarded plastics into higher quality products, such as lubricant oils or waxes. In turn, the waxes can be processed into everyday products like detergents and cosmetics.

Plastics, such as polyethylene, do not degrade easily because of their very strong carbon-carbon bonds. “We sought to recoup the high energy that holds those bonds together by catalytically converting the polyethylene molecules into value-added commercial products,” Delferro said. Polyethylene and other polyolefins, in particular, are challenging to deconstruct catalytically.

The catalyst itself consists of platinum nanoparticles — each a mere two nanometers in size — held in place on perovskite nanocuboids about a hundred nanometers in size (central image in accompanying figure). The team chose perovskite because it is very stable under the demanding temperatures and pressures required for catalysis and has proven to be an exceptionally good material for energy conversion.

For the difficult task of depositing nanoparticles of one material on larger nanoparticles of another material, the team opted for an atomic layer deposition approach for catalyst development, a technique developed at Argonne and Northwestern that allows precise control of nanoparticle size.

To test the catalyst, the authors began with a research-grade polyethylene, the most common component in plastic. Under the appropriate reaction conditions, the catalyst converted the polyethylene into a high-quality liquid product in high yield. Next, they tested the catalyst with a commercial plastic bag. Remarkably, the catalyst was just as effective with the plastic bag as pure polyethylene, and it produced far less of the light hydrocarbons (methane, ethane, etc.) generated by pyrolysis — a process that involves heating at high temperatures– or use of a conventional catalyst consisting of platinum nanoparticles on an alumina substrate.

Upon further study in the lab, which included theoretical calculations, the team found that two main features contribute to the effectiveness of their catalyst. One is the thermal stability of the platinum nanoparticles on the larger perovskite particles, due to the close geometric match between the cubic shapes of the nanoparticles and the support. The other is the non-porosity of the perovskite material, which promotes the catalytic reaction.

“Our team is delighted to have discovered this new technology that will help us get ahead of the mounting issue of plastic waste accumulation,” said Kenneth R. Poeppelmeier, the Charles E. and Emma H. Morrison Professor of Chemistry at Northwestern’s Weinberg College of Arts and Sciences, as well as director of Northwestern’s Center for Catalysis and Surface Science and member of the Program on Plastics, Ecosystems and Public Health. “Our findings have broad implications for developing a future in which we can continue to benefit from plastic materials, but do so in a way that is sustainable and less harmful to the environment and potentially human health.”

“Plastic pollution is obviously a big problem,” Delferro added. “No one wants to go on vacation at the beach only to find plastics strewn about everywhere. While our catalyst still needs further development, our results look very promising for contributing to the national laboratories’ mission of solving some of the world’s most complex problems.”

The teams performed some of this research at the Center for Nanoscale Materials, a DOE Office of Science User Facility at Argonne. This work was supported by the DOE Office of Basic Energy Sciences (Division of Chemical Sciences, Geosciences, and Biosciences, Catalysis Science Program).

About Argonne’s Center for Nanoscale Materials
The Center for Nanoscale Materials is one of the five DOE Nanoscale Science Research Centers, premier national user facilities for interdisciplinary research at the nanoscale supported by the DOE Office of Science. Together the NSRCs comprise a suite of complementary facilities that provide researchers with state-of-the-art capabilities to fabricate, process, characterize and model nanoscale materials, and constitute the largest infrastructure investment of the National Nanotechnology Initiative. The NSRCs are located at DOE’s Argonne, Brookhaven, Lawrence Berkeley, Oak Ridge, Sandia and Los Alamos National Laboratories. For more information about the DOE NSRCs, please visit https://science.osti.gov/User-Facilities/User-Facilities-at-a-Glance.

One quarter of bacterial pathogens can spread antibiotic resistance directly to…

‘TransMap’ will ensure reliable and efficient…