LA JOLLA—Rabies virus kills a shocking 59,000 people each year, many of them children. Some victims, especially kids, don’t realize they’ve been exposed until it is too late. For others, the intense rabies treatment regimen is out of the question: treatment is not widely available and the average $3,800 expense poses unthinkable economic burden for most people around the world. 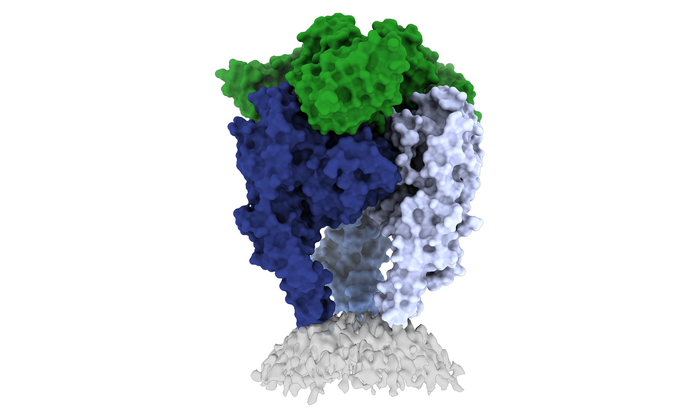 LA JOLLA—Rabies virus kills a shocking 59,000 people each year, many of them children. Some victims, especially kids, don’t realize they’ve been exposed until it is too late. For others, the intense rabies treatment regimen is out of the question: treatment is not widely available and the average $3,800 expense poses unthinkable economic burden for most people around the world.

Rabies vaccines, rather than treatments, are much more affordable and easier to administer. But those vaccines also come with a massive downside:

“Rabies vaccines don’t provide lifelong protection. You have to get your pets boosted every year to three years,” says LJI Professor Erica Ollmann Saphire, Ph.D. “Right now, rabies vaccines for humans and domestic animals are made from killed virus. But this inactivation process can cause the molecules to become misshapen—so these vaccines aren’t showing the right form to the immune system. If we made a better shaped, better structured vaccine, would immunity last longer?”

Saphire and her team, in collaboration with a team led by Hervé Bourhy, Ph.D., at the Institut Pasteur, may have discovered the path to better vaccine design. In a new study, published in Science Advances, the researchers share one of the first high-resolution looks at the rabies virus glycoprotein in its vulnerable “trimeric” form.

“The rabies glycoprotein is the only protein that rabies expresses on its surface, which means it is going to be the major target of neutralizing antibodies during an infection,” says LJI Postdoctoral Fellow Heather Callaway, Ph.D., who serves as the study’s first author.

“Rabies is the most lethal virus we know. It is so much a part of our history—we’ve lived with its specter for hundreds of years,” adds Saphire, who also serves as LJI’s President and CEO. “Yet scientists have never observed the organization of its surface molecule. It is important to understand that structure to make more effective vaccines and treatments—and to understand how rabies and other viruses like it enter cells.”

Scientists don’t know exactly why rabies vaccines don’t provide long-term protection, but they do know that its shape-shifting proteins are a problem.

Like a Swiss Army knife, the rabies glycoprotein has sequences that unfold and flip upward when needed. The glycoprotein can shift back and forth between pre-fusion (before fusing with a host cell) and post-fusion forms. It can also fall apart, changing from a trimer structure (where three copies come together in a bundle) to a monomer (one copy by itself).

This shapeshifting gives rabies a kind of invisibility cloak. Human antibodies are built to recognize a single site on a protein. They can’t follow along when a protein transforms to hide or move those sites.

The new study gives scientists a critical picture of the correct glycoprotein form to target for antibody protection.

Capturing the glycoprotein at last

Over the course of three years, Callaway worked to stabilize and freeze the rabies glycoprotein in its trimeric form. This “pre-fusion” form is the shape the glycoprotein takes before it infects human cells.

Callaway paired the glycoprotein with a human antibody, which helped her pinpoint one site where the viral structure is vulnerable to antibody attacks. The researchers then captured a 3D image of the glycoprotein using cutting-edge cryo-electron microscope equipment at LJI.

The new 3D structure highlights several key features researchers hadn’t seen before. Importantly, the structure shows two key pieces of the virus structure, called the fusion peptides, the way they appear in real life. These two sequences link the bottom of the glycoprotein to the viral membrane, but project into the target cell during infection. It is very hard to get a stable image of these sequences. In fact, other rabies researchers have had to cut them off to try to get images of the glycoprotein.

Callaway solved this problem by capturing the rabies glycoprotein in detergent molecules. “That let us see how the fusion sequences are attached before they snap upward during infection,” says Saphire.

Now that scientists have a clear view of this viral structure, they can better design vaccines that tell the body how to make antibodies to target the virus.

“Instead of being exposed to four-plus different protein shapes, your immune system should really just see one—the right one,” says Callaway. “This could lead to a better vaccine.”

Preventing a family of viruses

Saphire hopes stronger, broader immunity could help people in regular contact with animals, such as veterinarians and wildlife workers, as well as the billions of people who may accidentally come in contact with a rabid animal. Rabies is endemic across every continent except Antarctica and infects numerous species including dogs, racoons, bats, and skunks.

This new work may also open the door to a vaccine to protect against the whole lyssavirus genus, which includes rabies and similar viruses that can spread between humans and other mammals.

The next step in this work is to capture more images of rabies virus and its relatives together with neutralizing antibodies. Callaway says scientists are working on solving several of these structures, which could reveal antibody targets that lyssaviruses have in common.

“Because we didn’t have these structures of the rabies virus in this conformational state before, it’s been hard to design a broad-spectrum vaccine,” says Callaway.

This study was supported by the National Institutes of Health (grants 5T32AI07244-36 and 5F32AI147531-03) and a Swiss National Science Foundation Early Postdoc Mobility Fellowship (P2EZP3_195680). A portion of this research was supported by NIH grant U24GM129547 and performed at the 742 PNCC at OHSU and accessed through EMSL (grid.436923.9), a DOE Office of Science User Facility sponsored by the Office of Biological and Environmental Research. Confocal microscopy on the Zeiss LSM 880 was supported by equipment grant NIH 745 S10OD021831.

La Jolla Institute for Immunology is dedicated to understanding the intricacies and power of the immune system so that we may apply that knowledge to promote human health and prevent a wide range of diseases. Since its founding in 1988 as an independent, nonprofit research organization, the Institute has made numerous advances leading toward its goal: life without disease.

About the Institut Pasteur

The Institut Pasteur, a non-profit foundation with recognized charitable status set up by Louis Pasteur in 1887, is today an internationally renowned center for biomedical research.  In the pursuit of its mission to tackle diseases in France and throughout the world, the Institut Pasteur operates in four main areas: research, public health, training, and development of research applications. The Institut Pasteur is a globally recognized leader in infectious diseases, microbiology, and immunology, with research focusing on the biology of living systems. Among its areas of investigation are emerging infectious diseases, antimicrobial resistance, certain cancers, neurodegenerative diseases, and brain connectivity disorders. The Institut Pasteur’s outstanding research is facilitated by the development of a technological environment of the highest standard, with core facilities for nanoimaging, computational biology and artificial intelligence. Since its inception, 10 Institut Pasteur scientists have been awarded the Nobel Prize for Medicine, including two in 2008 for the 1983 discovery of the human immunodeficiency virus (HIV) that causes AIDS.

Since July 1, 2021, the Institut Pasteur is a research partner organization of Université Paris Cité.

The Institut Pasteur is part of the Pasteur Network a worldwide network of 33 members on five continents, united by Pasteurian values, that contribute to global health.