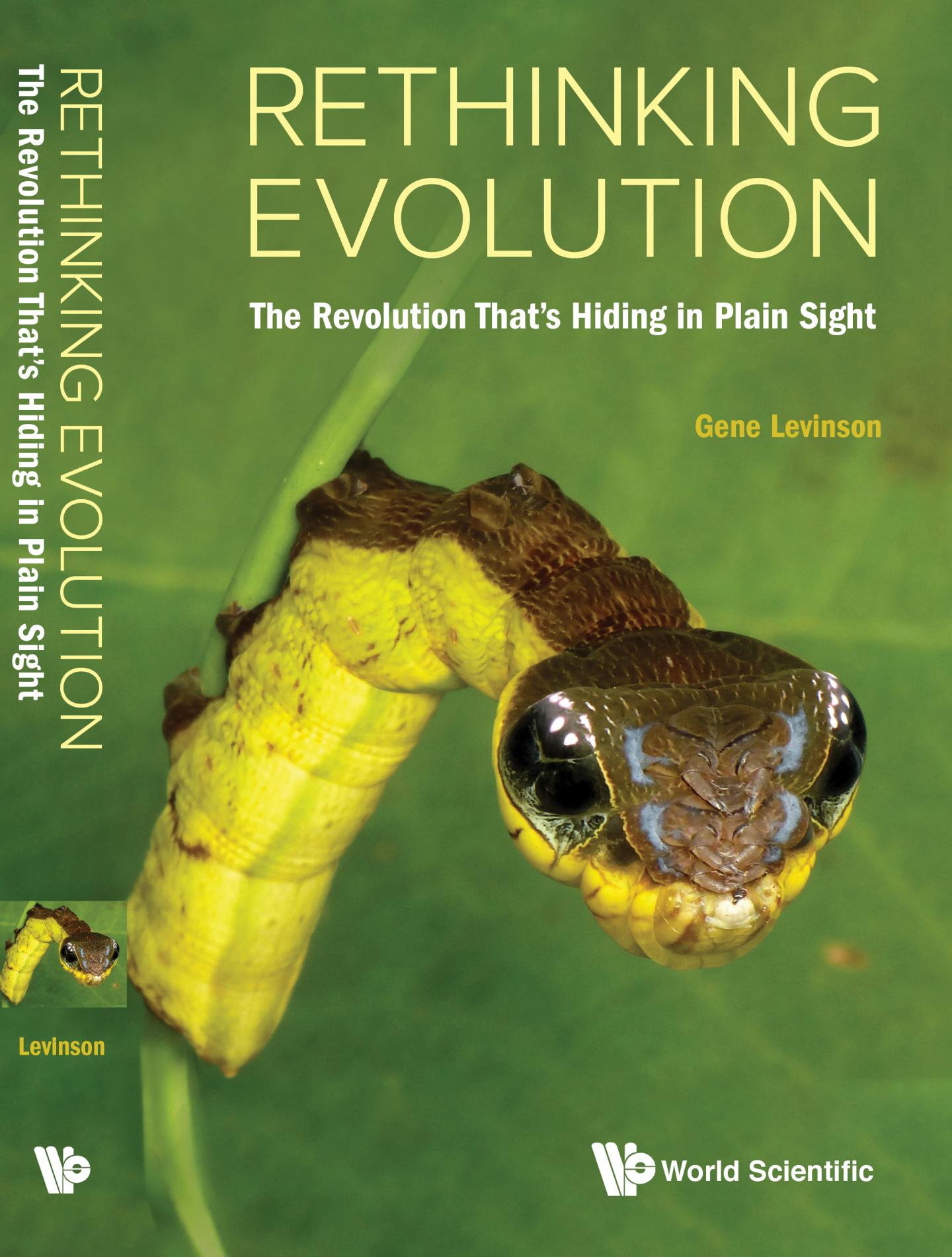 In the cover photo, nature photographer Andreas Kay has captured one of the most striking examples of Batesian Mimicry in nature–first reported by Henry Walter Bates in 1861. If you thought you were looking at a photograph of a venomous snake, you are not alone. The snake mimic is actually a caterpillar, the larval form of a moth (Hemeroplanes triptolemus). Its extraordinary resemblance to the triangular head of a viper is achieved by expanding its first body segments when disturbed. Darwin’s classical theory could only explain the origins of mimicry in very general terms, at a high level. But today, biologists understand the details of the concrete molecular, cellular, and developmental processes that make natural selection possible in the first place.

Rethinking Evolution: the Revolution That’s Hiding in Plain Sight makes these recent discoveries accessible to the general public, to biology teachers and students, as well as professional research scientists. Together, they represent a major leap forward, which is called the Updated Evolutionary Synthesis (UES). The brainchild of Dr Gene Levinson, who founded one of the first clinics in the world to reliably apply single-cell PCR to the prevention of genetic disorders, the UES brings a broad spectrum of peer-reviewed research together to provide a more plausible naturalistic explanation for biological evolution than natural selection alone. Perspectives ranging from the role of energy in the origin of life to the networks of protein-DNA interactions that govern multicellular development are woven together in a robust conceptual fabric consistent with twenty-first century cutting-edge research.

Inspired in part by the surprising ways that DNA sequences change–such as his early discovery of a fundamental mispairing mechanism by which DNA sequences expand–and drawing on a career’s worth of experience both as a research scientist as well as a biology and chemistry tutor, Levinson provides an engaging account that is essential reading both for the public awareness and understanding of the science of evolution and for students and professionals in the biomedical sciences.

“Every biology teacher should become familiar with this book,” says Levinson. “Years from now, the UES will be viewed as a twenty-first century conceptual advance in evolutionary theory comparable to the “Modern Synthesis” or the discovery of the genetic code. One of the stunning conceptual advances is that natural selection actually changes the potential for higher levels of complexity to arise, in a non-random fashion. There is more to natural selection than accumulation of incremental, random mutations. Each evolutionary innovation lays the groundwork for more complex innovations to emerge, and when they prove useful in the struggle for existence, they tend to be preserved. I refer to this natural process as Emergent Evolutionary Potential (EEP). Many such innovations become part of an evolutionary ‘toolkit,’ containing modules that are routinely modified and reused in a variety of ways. Only recently have we discovered the powerful mechanisms, such as gene duplication, that accelerate evolutionary change. I refer to the modular toolkit as the Generative Phenotype. The UES offers a down-to-earth explanation for the origins of biological complexity that is far more detailed and concrete than the classical theory of natural selection. Here is a more plausible explanation for the origins of biological complexity–which explains how humans and other species got here in the first place.”

The UES cuts through the confusion surrounding evolutionary theory in a practical way. In addition to a wide-ranging survey of proposed updates to the “Modern Synthesis”, this book provides extraordinary new insights including Emergent Evolutionary Potential and the Generative Phenotype. It also helps to popularize major new insights into the origin of life, based on the recent discovery of alkaline hydrothermal vents. Drawing on these and a broad range of well-characterized, peer-reviewed empirical facts, contributed by thousands of research scientists, the UES transcends classical Darwinian natural selection while retaining those core principles that have stood the test of time.

Gene Levinson is a generalist with broad and diverse professional experience and interests. Trained at UC Berkeley, UC Irvine, and Harvard-affiliated research institutes, his doctoral thesis described a fundamental molecular mechanism for the expansion and diversification of simple repetitive DNA sequences. After tutoring Harvard undergraduates while pursuing research in molecular and cellular immunology, he founded and directed one of the first molecular genetics clinics in the world for prevention of genetic disorders, via amplification of single-cell human DNA, with zero clinical errors over his eight-year tenure. With a special interest in tutoring gifted and talented high school students, he has logged over a thousand hours of one-on-one sessions, focused on general and AP biology and chemistry, with over 300 five-star reviews from parents. In addition to forging an Updated Evolutionary Synthesis, his current interests include making evolution accessible to non-scientists, and building and launching an innovative online platform that helps make educational content, documentary films, and other digital media more accessible, more powerful, and more memorable.

Building the future of federal science

These sharks use unique molecules to glow green

Scienmag Feb 27, 2019
The £1 million project will be a collaboration between pioneering technology company PAXMAN and the University of…

Using light to speed up computation