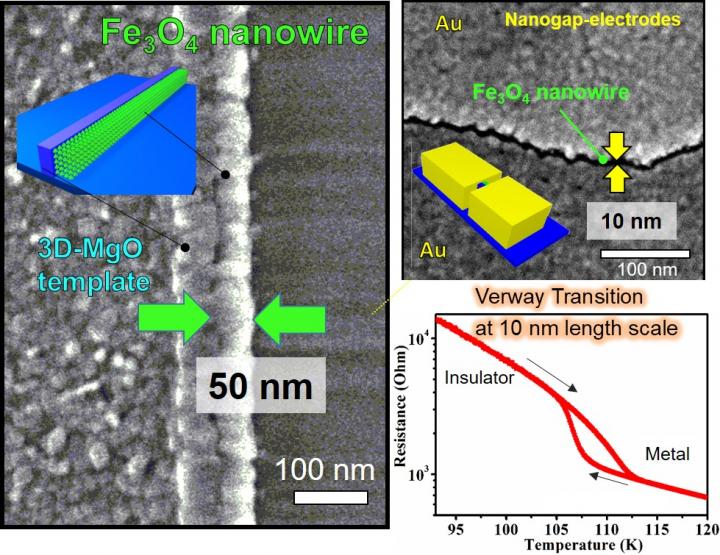 Osaka – Magnetite (Fe3O4) is best known as a magnetic iron ore, and is the source of lodestone. It also has potential as a high-temperature resistor in electronics. In new research led by Osaka University, published in Nano Letters, ultra-thin nanowires made from Fe3O4 reveal insights into an intriguing property of this mineral.

When cooled to around 120 K (-150°C), magnetite suddenly shifts from a cubic to a monoclinic crystal structure. At the same time, its conductivity sharply drops–it is no longer a metal but an insulator. The exact temperature of this unique “Verwey transition”, which can be used for switching in electronic devices, depends on the sample’s properties, like grain size and particle shape.

Magnetite can be made into thin films, but below a certain thickness–around 100 nm–the Verwey transition weakens and needs lower temperatures. Thus, for electronics at the nano-scale, preserving this key feature ofFe3O4 is a major challenge. The Osaka study used an original technique to produce magnetite nanowires of just 10 nanometer length, which had exquisite Verwey behavior.

As described by study co-author Rupali Rakshit, “We used laser pulses to deposit Fe3O4 onto a template of MgO. We then etched the deposits into wire shapes, and finally attached gold electrodes on either side so we could measure the conductivity of the nanowires.”

When the nanowires were cooled to around 110 K (-160°C), their resistance sharply increased, in line with typical Verwey behavior. For comparison, the team also produced Fe3O4 as a thin film with a large surface area on the millimeter scale. Its Verwey transition was not only weaker, but required temperatures down to 100 K.

“The nanowires were remarkably free of crystal defects,” says study leader Azusa Hattori. “In particular, unlike the thin film, they were not dogged by antiphase domains, where the atomic pattern is suddenly reversed. The boundaries of these domains block conduction in the metal phase. In the insulator phase, they stop resistivity from emerging, so they flatten out the Verwey transition.”

The nanowires were so pristine that the team could directly study the origin of the Verwey transition with unprecedented accuracy. The insulating properties of magnetite below 120 K are believed to come from “trimerons” repetitive structures in the low-temperature crystal. The researchers estimated the characteristic length scale of trimerons, and it closely matched the true size according to previous research.

“The Verwey transition has a host of potential uses in energy conversion, electronics and spintronics,” says Hattori. “If we can fine-tune the transition by controlling the amount of defects, we can envisage producing very low-powered, yet advanced devices to support green technology.”

Tending the future of data analysis with MVApp

Anti-Angiogenesis Drug Discovery and Development, now in its 4th edition

Scienmag May 2, 2019
Line of the inscription lends credence to the story of Balaam in the Book of Numbers, Tel Aviv University…

Persistence of gut microbial strains in twins, living apart after…