Researchers use fluorine-doping method to construct catalysts with enhanced performance

As industry has developed over the past century, excess carbon dioxide emission had led to climate problems and greenhouse effects. Scientists are constantly working toward solutions for the problems of greenhouse gases, which are warming the earth’s surface and the lower parts of the atmosphere. Carbon dioxide is the most prevalent of the greenhouse gases. 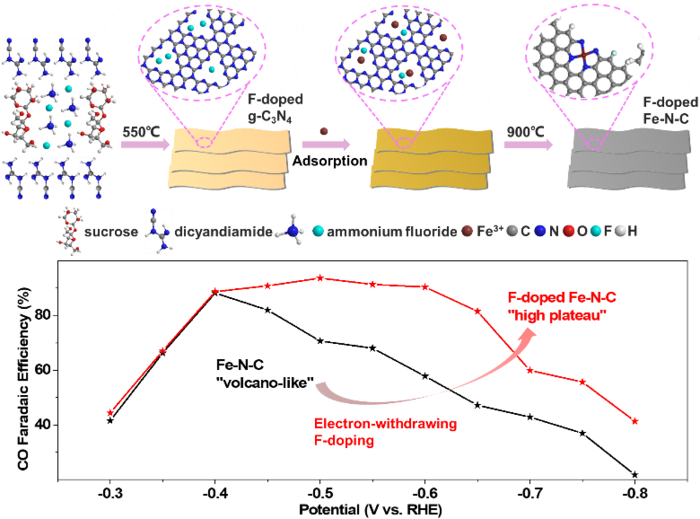 As industry has developed over the past century, excess carbon dioxide emission had led to climate problems and greenhouse effects. Scientists are constantly working toward solutions for the problems of greenhouse gases, which are warming the earth’s surface and the lower parts of the atmosphere. Carbon dioxide is the most prevalent of the greenhouse gases.

Carbon dioxide can be electrochemically reduced into valuable chemicals using wind or sunlight-derived electrical energies. This carbon dioxide electroreduction presents scientists with a promising strategy for managing the carbon balance on a global scale. Electrochemical reduction of carbon dioxide offers the future potential for converting the carbon dioxide into useful, more environmentally friendly chemicals, such as carbon monoxide, methane, or ethanol. To achieve carbon dioxide electroreduction, scientists need efficient electrocatalysts. Electrocatalysts are the catalysts used in electrochemical reactions. They can increase the rate of the reaction that occurs. A research team from Nanjing University has constructed catalysts using a fluorine-doping method that enhances their performance.

The research team concludes that the electron-withdrawing fluorine-doping allows the iron-nitrogen-carbon single-site catalyst to maintain the advantage of low overpotential, with a much increased carbon monoxide faradaic efficiency and partial current density because of the stabilized Fe3+ sites.

The team synthesized the iron-nitrogen-carbon using a heat method called adsorption pyrolysis. They performed the carbon dioxide electroreduction experiments in a H-type cell and a gas diffusion electrode cell. They used theoretical calculations to further understand the improvements that happened with the fluorine doping.

“Electrochemical tests show the enriched defects by fluorine-doping kinetically increase the electroactive surface area and improve charge transfer,” said Yang. Looking ahead to further study, the research team’s findings provide them with a simple and controllable strategy to enhance the carbon dioxide electroreduction to carbon monoxide performance of iron-nitrogen-carbon catalysts by stabilizing the Fe3+ sites.

Nano Research is a peer-reviewed, international and interdisciplinary research journal, sponsored by Tsinghua University and the Chinese Chemical Society. It offers readers an attractive mix of authoritative and comprehensive reviews and original cutting-edge research papers. After more than 10 years of development, it has become one of the most influential academic journals in the nano field. Rapid review to ensure quick publication is a key feature of Nano Research. In 2020 InCites Journal Citation Reports, Nano Research has an Impact Factor of 8.897 (8.696, 5 years), the total cites reached 23150, and the number of highly cited papers reached 129, ranked among the top 2.5% of over 9000 academic journals, ranking first in China’s international academic journals.