Researchers unravel process for the formation of rainstorms 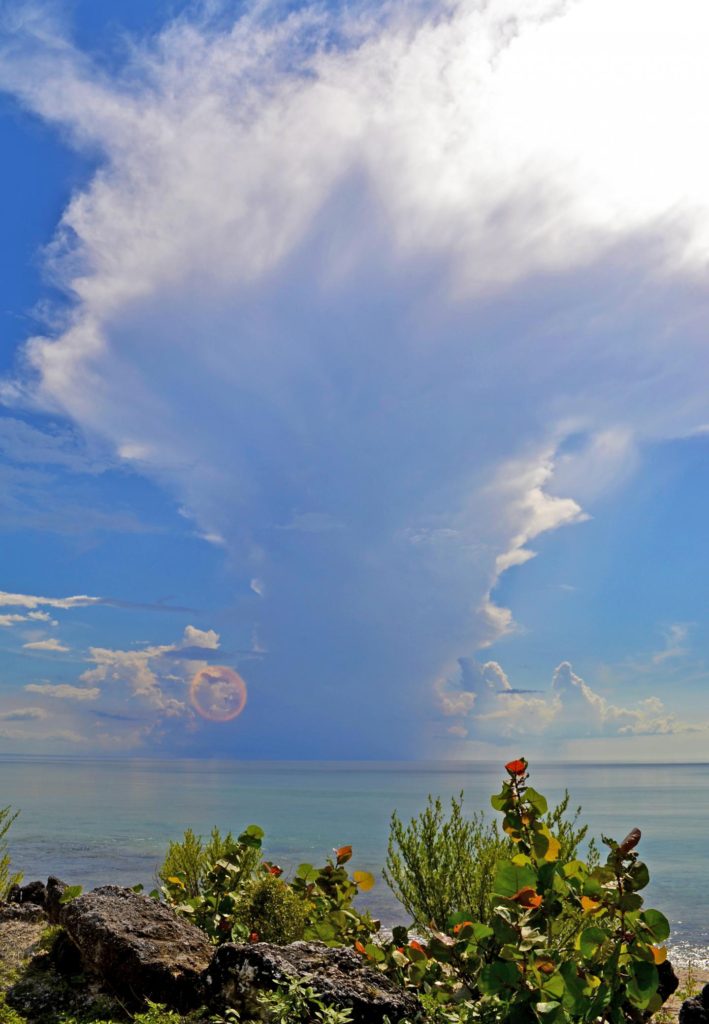 Violent thunderstorms can often cause torrential rain, which pose a threat for both humans and the infrastructure. Until now such extreme weather phenomena have been very poorly understood. However, using advanced simulations for cloud systems, researchers also from the Niels Bohr Institute have determined how complex cloud systems build up in the atmosphere, which then interact with each other and strengthen the further build up of heavy rain and severe thunderstorms. The results are published in the scientific journal, Nature Geoscience.

Using high-resolution cloud models, researchers from the Max Planck Institute for Meteorology in Hamburg, the Swedish Meteorological and Hydrological Institute in Norrköping and the Niels Bohr Institute at the University of Copenhagen analysed how heavy rainfall is affected by rising temperatures. The simulations were performed over an area that typically constitutes a single field area in climate models, that is, an area of 200 km x 200 km. In the high-resolution cloud model the area is divided into smaller areas of 200 meters, resulting in a 1000 times greater resolution. The high resolution made it possible for the researchers to uncover the processes taking place in the atmosphere, which are only included in global climate models to a very approximate degree.

“To detect the physical process that form, for example, storm clouds, we use simulations that are capable of revealing local thermal and moisture variations, which give rise to so-called ‘convective’ clouds. Convection is the process that forms, for example, thunderstorm clouds. Due to the heating of the surface in connection with sufficient humidity, a warm updraft is released in the atmosphere. Traditional climate models do not see these processes to an adequate degree. It is interesting how systematically convective clouds occur. Where two clouds collide, new and stronger clouds often appear,” explains Jan O. Haerter, researcher at the Niels Bohr Institute at the University of Copenhagen.

Clouds are affected from the outside and inside

The simulations in the atmosphere build up a state of organisation that the researchers describe as a kind of ‘memory’.

“What we see here is a so-called complex system. The way the atmosphere behaves is not only influenced by large scales, but is also due to what we call self-organisation. Convective clouds come and go within a certain period. Over the course of the day, these periods increase and so does the intensity of rain,” explains Jan O. Haerter.

Their results show that heavy rain is produced when multiple clouds collide and thus interact with each other. Without these collisions between clouds, the rain remains light.

Isolated rain showers show no change in intensity with increasing temperatures, but rising temperatures lead to more frequent collisions of convective cloud systems. The researchers compare this dynamic to that of small streams merging to form larger rivers – in an analogous way collisions between cloud systems can result in heavier rain.

The new results therefore contradict the traditional global climate models where convective clouds are seen as being independent of each other.

In previous studies, the researchers discovered that heavy, thunderous rain showers that are often seen during summer in temperate latitudes were much more sensitive to temperature than expected.

The researchers found that when the temperature rose, these high clouds behaved very differently from the clouds that were spread over large areas, but they could not determine the main reason for the increased rainfall from the measurements alone.

“With the new model calculations, we are getting a better understanding of the intense thunderstorms that can lead to the severe flooding that often occurs in temperate latitudes,” explains Jan O. Haerter.