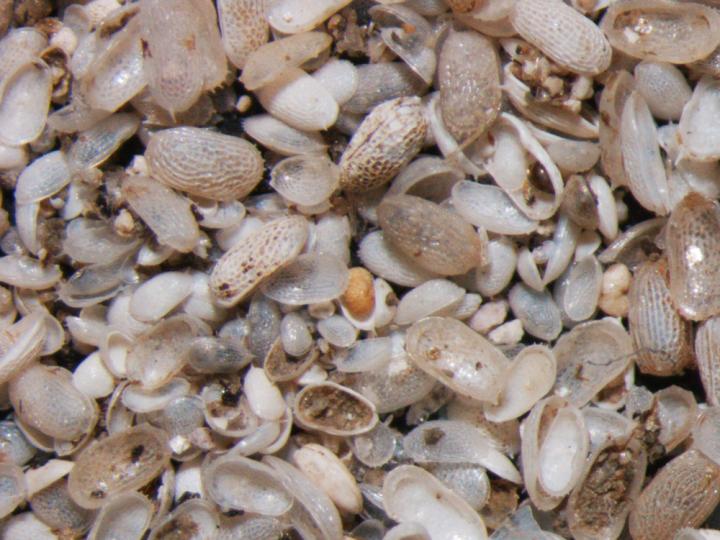 The tiny shells at the bottom of Lake Nakaumi in southwest Japan may contain the secrets of the East Asia Summer Monsoon. This rainy season is fairly predictable, ushering in air and precipitation conducive to growing crops, but – sometimes without any hint – the pattern fails. Some areas of East Asia are left without rainfall, and their crops die. Other areas are inundated with rain, and their crops and homes flood.

Ostracoda shells are smaller than the white wisp a fingernail grows over a month, yet they have recorded the effects of sunshine and climate shifts for almost 500 million years.

A team of researchers dug into the lake and the rich historical record in the shells to better understand why East Asian summer monsoons vary at the centennial scale, which should hold relatively steady. They published their results on March 22, 2019, in Scientific Reports.

“The mechanisms driving the variations in East Asian summer monsoons remain unclear, so we used the oxygen isotopes from adult ostracode shells to reconstruct the variations over the last 3,000 years in southwestern Japan,” said Katsura Yamada, paper author and a professor in the department of geology and faculty of science at Shinshu University.

Yamada and the team cored sections of the lake, retrieving shells from present day to 3,000 years ago. The scientists analyzed the shells, measuring a specific ratio between slightly different versions of oxygen, called isotopes. The isotope ratio can offer a glimpse into the atmosphere’s precise composition thousands of years ago. A higher rate of nitrogen in the atmosphere will produce a different isotope of oxygen than times when nitrogen is less abundant.

The researchers found that the primary factor of the centennial-scale variations in the East Asia summer monsoon was solar activity, also called insolation.

“Our results and compiled data propose that insolation variation was a primary factor of the centennial-scale East Asia summer monsoon variations,” Yamada said. “However, dominant factors affecting the variations can shift according to the solar insolation decreases.”

During sunny periods, the insolation dominates the East Asian monsoon pattern. During cooling off periods, usually around glacial ice ages, other factors – such as wind patterns – took over as the dominant influencer.

“Our next goal is to clarify the relationship between East Asian monsoon variations and other climatic phenomena,” Yamada said.

This work was supported by the Japan Society for the Promotion of Science and the cooperative research program for the Center for Advanced Marine Core Research at Kochi University.

Other authors Kazuma Kohara of the department of geology and Faculty of Science at Shinshu University; Minoru Ikehara of the Center for Advanced Marine Core Research at Kochi University; and Koji Seto of the Estuary Research Center at Shimane University.

Shinshu University is a national university in Japan founded in 1949 and working on providing solutions for building a sustainable society through interdisciplinary research fields: material science (carbon, fiber, composites), biomedical science (for intractable diseases, preventive medicine), and mountain science. We aim to boost research and innovation capability through collaborative projects with distinguished researchers from the world. For more information, please see: http://www.shinshu-u.ac.jp/english/

Wristbands do a health check while you work out