CHAMPAIGN, Ill. — Scientists report that they have built a living “minimal cell” with a genome stripped down to its barest essentials – and a computer model of the cell that mirrors its behavior. By refining and testing their model, the scientists say they are developing a system for predicting how changes to the genomes, living conditions or physical characteristics of live cells will alter how they function. 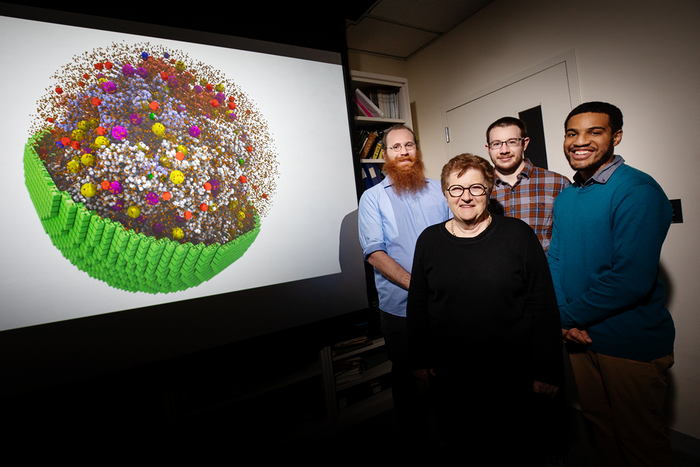 CHAMPAIGN, Ill. — Scientists report that they have built a living “minimal cell” with a genome stripped down to its barest essentials – and a computer model of the cell that mirrors its behavior. By refining and testing their model, the scientists say they are developing a system for predicting how changes to the genomes, living conditions or physical characteristics of live cells will alter how they function.

They report their findings in the journal Cell.

Minimal cells have pared-down genomes that carry the genes necessary to replicate their DNA, grow, divide and perform most of the other functions that define life, said Zaida (Zan) Luthey-Schulten, a chemistry professor at the University of Illinois Urbana-Champaign who led the work with graduate student Zane Thornburg. “What’s new here is that we developed a three-dimensional, fully dynamic kinetic model of a living minimal cell that mimics what goes on in the actual cell,” Luthey-Schulten said.

The simulation maps out the precise location and chemical characteristics of thousands of cellular components in 3D space at an atomic scale. It tracks how long it takes for these molecules to diffuse through the cell and encounter one another, what kinds of chemical reactions occur when they do, and how much energy is required for each step.

To build the minimal cell, scientists at the J. Craig Venter Institute in La Jolla, California, turned to the simplest living cells – the mycoplasmas, a genus of bacteria that parasitize other organisms. In previous studies, the JCVI team built a synthetic genome missing as many nonessential genes as possible and grew the cell in an environment enriched with all the nutrients and factors needed to sustain it. For the new study, the team added back a few genes to improve the cell’s viability. This cell is simpler than any naturally occurring cell, making it easier to model on a computer.

Simulating something as enormous and complex as a living cell relies on data from decades of research, Luthey-Schulten said. To build the computer model, she and her colleagues at Illinois had to account for the physical and chemical characteristics of the cell’s DNA; lipids; amino acids; and gene-transcription, translation and protein-building machinery. They also had to model how each component diffused through the cell, keeping track of the energy required for each step in the cell’s life cycle. NVIDIA graphic processing units were used to perform the simulations.

“We built a computer model based on what we knew about the minimal cell, and then we ran simulations,” Thornburg said. “And we checked to see if our simulated cell was behaving like the real thing.”

The simulations gave the researchers insight into how the actual cell “balances the demands of its metabolism, genetic processes and growth,” Luthey-Schulten said. For example, the model revealed that the cell used the bulk of its energy to import essential ions and molecules across its cell membrane. This makes sense, Luthey-Schulten said, because mycoplasmas get most of what they need to survive from other organisms.

The simulations also allowed Thornburg to calculate the natural lifespan of messenger RNAs, the genetic blueprints for building proteins. They also revealed a relationship between the rate at which lipids and membrane proteins were synthesized and changes in membrane surface area and cell volume.

“We simulated all of the chemical reactions inside a minimal cell – from its birth until the time it divides two hours later,” Thornburg said. “From this, we get a model that tells us about how the cell behaves and how we can complexify it to change its behavior.”

“We developed a three-dimensional, fully dynamic kinetic model of a living minimal cell,” Luthey-Schulten said. “Our model opens a window on the inner workings of the cell, showing us how all of the components interact and change in response to internal and external cues. This model – and other, more sophisticated models to come – will help us better understand the fundamental principles of life.”

Luthey-Schulten holds the Murchison-Mallory Endowed Chair in Chemistry. She is a professor of physics and an affiliate of the Beckman Institute for Advanced Science and Technology, the Carl. R. Woese Institute for Genomic Biology, the Center for Biophysics and Quantitative Biology and the Theoretical and Computational Biophysics group at the U. of I. She also is the co-director of the National Science Foundation’s Center for the Physics of Living Cells at Illinois.

The National Science Foundation and National Institutes of Health support this research.

The paper “Fundamental behaviors emerge from simulations of a living minimal cell” is available to members of the media from the U. of I. News Bureau.

Fundamental behaviors emerge from simulations of a living minimal cell